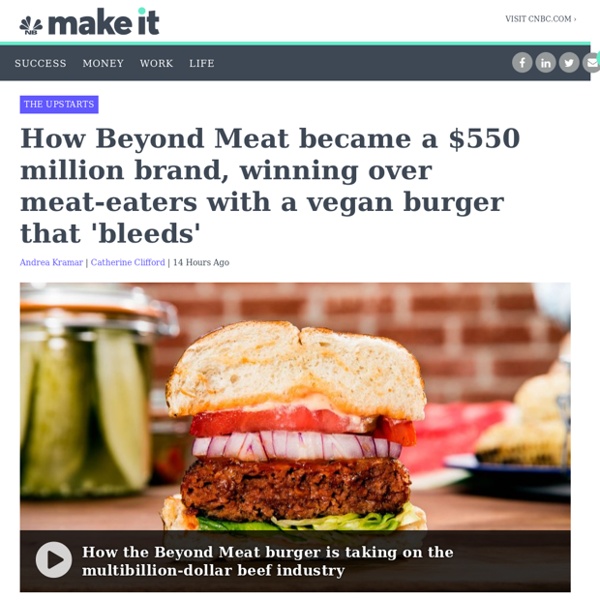 Whatever your burger pleasure, targeting meat-eaters is a smart move — there are way more of them than there are vegans and vegetarians. Only 5 percent of Americans identify as vegetarian and 3 percent vegan, according to a 2017 Gallup poll. Those numbers haven't changed much in the last decade or so. Brown says the company found that 93 percent of the consumers in conventional grocery stores that are buying a Beyond Meat product are also putting animal meat their basket. "So they're buying not only plant based meat, but they're buying animal meat and that's a really important breakthrough for us," Brown tells CNBC Make It. One tipping point in bringing plant-based "meat" to the masses has been the increase in product quality thanks to brands like Beyond Meat, James Kenji López-Alt, chef/partner at Wursthall restaurant in San Mateo, California, tells CNBC Make It. Plus, he says, prices have "reduced drastically" to about the same amount as meat. All this has made Beyond Meat big business.

Eating Healthy Is Good for Your Brain The more fruits, vegetables and fish respondents say they eat, the better they rate their brain health and overall health. Sixty-three percent of the adults surveyed say they eat a healthy diet up to three or four days a week. Those who eat seafood in a typical week, but not red meat, report better brain health and higher average mental well-being scores than individuals who have red meat but not seafood. The survey results are in line with new recommendations by AARP’s Global Council on Brain Health (GCBH), which conclude that a plant-based diet rich in fruits and vegetables is associated with better brain health and that eating fish and other seafood seems to improve cognitive function. In addition, excessive amounts of alcohol, saturated fats and salt are all harmful to brain health, according to the GCBH.

Martin Luther King, Jr. Was More Radical Than You Think - by Ben Passmore On the 50th anniversary of his death, it’s time to remember who he really was by Ben Passmore Posted April 4th, 2018 Rise and Shine.The World is Doomed. The Nib, delivered to your inbox every AM. The treasure trove of unique genomes hiding in plain sight Jenn Liv There’s a boxed warning that comes along with Plavix, the anti-blood-clotting drug that hit the market in 1997. If you’re a “poor metabolizer,” it warns, the drug may not be effective for you and might even lead to negative effects. How do you find out if you’re a poor metabolizer? You take a genetic test. However, this FDA-mandated warning about genetic difference was added only in 2010 — after the drug had been on the market for more than a decade.

Anti-Inflammatory Coconut and Sweet Potato Muffins with Ginger, Turmeric, Cinnamon, and Maple Syrup The idea that delicious baked goods can also be a healthy snack is extremely satisfying. Try to avoid the traditional inflammatory ingredients like processed grains, refined sugars, vegetable oils, and trans fat. If you're able to replace them with anti-inflammatory ingredients that are rich in nutrients, you will end up with a healthy and tasty snack. The recipe below contains a large amount of sweet potatoes or yams, which are very nutritious and a great source of antioxidants, vitamins, and minerals. According to the San Diego-based nutritionist Laura Flores: "Sweet potatoes are high in vitamin A, vitamin B5, B6, thiamin, niacin, riboflavin, and, due to their orange color, are high in carotenoids.

The Guardian view on Israel’s democracy: killing with impunity, lying without consequence? In the last nine months of 2018, according to the United Nations, Palestinians – many of them children – were killed at the rate of around one a day while taking part in protests along Israel’s perimeter fence with Gaza about their right to return to ancestral homes. They included medics and journalists. Most of the dead were unarmed and posed no danger to anyone, with little more than rocks in their hands and slogans on their lips. Yet Israel continued with an immoral and unlawful policy that sees soldiers of its military, which is under democratic civilian control, shoot, gas, shell and kill protesters, including those who pose no credible threat. Hospitals in Gaza, which already struggle under an Israeli-Egyptian blockade, have been stretched to breaking point in dealing with the flood of patients ferried in from the protests.

Eerie Photos of History's Deadliest Pandemic In 1918, it is estimated that about 500 million people — or about one third of the world’s population — caught influenza, otherwise known at the time as the “Spanish Flu." It was the deadliest disease outbreak in recorded history, with between 50 million and 100 million people worldwide being killed. In the United States alone, 675,000 died and the average life expectancy fell by about 12 years between 1917 to 1918.

Poor Diet Linked to Thousands of Cancer Diagnoses, Study Finds Your diet may have more impact on your cancer risk than you might think, a new study has found. An estimated 80,110 new cancer cases among adults 20 and older in the United States in 2015 were attributable simply to eating a poor diet, according to the study, published in the JNCI Cancer Spectrum on Wednesday. “This is equivalent to about 5.2% of all invasive cancer cases newly diagnosed among US adults in 2015,” said Dr. Fang Fang Zhang, a nutrition and cancer epidemiologist at Tufts University in Boston, who was first author of the study. “This proportion is comparable to the proportion of cancer burden attributable to alcohol,” she said. The researchers evaluated seven dietary factors: a low intake of vegetables, fruits, whole grains and dairy products and a high intake of processed meats, red meats and sugary beverages, such as soda.

THE THOMAS NOMINATION: The Senate and Sexism; Panel's Handling of Harassment Allegation Renews Questions About an All-Male Club "They are men, they can't possibly know what it's like to receive verbal harassment, harassment that is fleeting to the man and lasting and demeaning to the woman," said Representative Nancy Pelosi, a California Democrat. "These allegations may not be true. But women in America have to speak up for themselves and say we want to remove all doubt that the person who goes to the Supreme Court has unquestioned respect for women.

Medicaid work requirements: Where do they stand after the blue wave? The 2018 midterm elections have dealt a significant setback to President Trump’s agenda in the legislative arena. However, there are still many ways for the Trump administration to keep swinging away at the Affordable Care Act. One particularly effective unilateral instrument is the regulatory process – that is, the implementation of statutory law by executive agencies. This may prove particularly consequential for Medicaid, the health coverage program for those with low incomes or disabilities. One particular area of attention for scholars like me is so-called community engagement or work requirements for Medicaid beneficiaries.

Our list of 5 underrated foods that deserve a spot in your grocery cart - Nutrition Action When was the last time you walked into the supermarket and made a beeline for the bulgur or cabbage? These underrated stars aren’t just delicious and healthy. They’re also relatively unprocessed, inexpensive, and versatile. 1. Lentils Cheap. Republican lawmakers who backed Trump’s tax cuts now freak out over bipartisan spending deal The bipartisan congressional leadership and White House reached a two-year budget deal on Monday, seemingly averting another government shutdown and preventing a default on the national debt that has grown to an all-time high under President Donald Trump. But despite previously backing the 2017 tax cuts for the rich that have helped fuel the largest monthly budget deficits in American history, several self-styled deficit hawks in Congress are now signaling their opposition based on claims of fiscal conservationism. The deal — which Trump praised on Twitter as “a real compromise in order to give another big victory to our Great Military and Vets!” — will provide more than $1.3 trillion for agency spending for each of the next two years and suspend the nation’s debt limit until after the election. This will prevent the government from defaulting on its debt payments for the first time in history and avert some of the spending cuts agreed to in the 2011 Budget Control Act. Rep.