Cry, Heart, But Never Break: A Remarkable Illustrated Meditation on Loss and Life 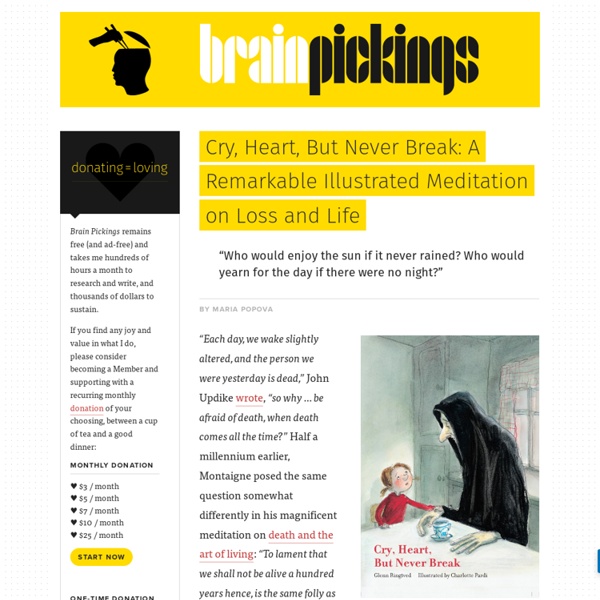 “Each day, we wake slightly altered, and the person we were yesterday is dead,” John Updike wrote, “so why … be afraid of death, when death comes all the time?” Half a millennium earlier, Montaigne posed the same question somewhat differently in his magnificent meditation on death and the art of living: “To lament that we shall not be alive a hundred years hence, is the same folly as to be sorry we were not alive a hundred years ago.” Yet mortality continues to petrify us — our own, and perhaps even more so that of our loved ones. And if the adult consciousness is so thoroughly unsettled by the notion of death, despite intellectually recognizing it as a necessary and inevitable part of life, how is the child consciousness to settle into comprehension and comfort? This warmly wistful story begins outside the “small snug house” where four children live with their beloved grandmother. But Death eventually curls his bony hand over the cup to signal that the time has come.

11 Fascinating Facts About ‘Goodnight Moon’ Goodnight Moon, a deceptively simple children’s book that falls somewhere between a going-to-sleep narrative and a lullaby, will turn 68 later this year—and yet it remains one of the most universal cultural references even all these decades later. Here are a few things you might not have known about Margaret Wise Brown's sparse classic. 1. Goodnight Moon's style reflects real childhood semantics. Brown was born in 1910 to moderately wealthy but distant and bickering parents. self drive & electric vehicles will change whole world Let’s get right to the punch line: a very strong case can be made, and will be below, that within 15 years virtually all vehicular traffic in the US will be by autonomous electric vehicles (A-EVs). And that in turn will fundamentally change how our society works, largely for the better — if we don’t blow the transition, that is. Because that statement has such profound implications, let’s unpack it bit by bit. EV’s are cheaper. Period.

Young Adult Library Services Association (YALSA) * denotes top ten title Alexander Hamilton: The Graphic History of an American Founding Father. By Jonathan Hennessey. Illus. Watch Marvel Director Taika Waititi’s clever new anti-racism PSA. Human Rights Commission (New Zealand) “You may not be in a position to give much to racism, but whatever you feel comfortable giving will make a huge difference,” the director of the upcoming reassures his countrymen and –women. “You don’t have to be a full-on racist—just being a tiny bit racist is enough!” Framing the PSA as a plea to keep racism alive through small contributions is smart, and it’s a good, concise explanation of the way microaggressions can add up to a completely toxic culture.

The Revolutionary Giant Ocean Cleanup Machine Is About To Set Sail On a Wednesday afternoon in a sprawling lot on a former naval air station in Alameda, California, across the bay from San Francisco, workers are welding a massive black tube together. The tube–roughly the length of a football field–is one piece of a larger system that will set sail for the Great Pacific Garbage Patch this summer, where it will begin collecting some of the 1.8 trillion pieces of plastic trash brought there by ocean currents. Six years ago, the technology was only an idea presented at a TEDx talk. The Hobbit: How a 10-Year-Old Boy Helped Unleash Tolkien Upon the World Let’s start at the beginning, the place where Tolkien would want us to start if he were writing this article. Where did the idea for The Hobbit come from? According to Tolkien, in a letter written to W. H. Auden in 1955, he started crafting The Hobbit in the early-1930s when, on a whim, he wrote “In a hole in the ground there lived a hobbit” on the back of an exam he was grading.

Every day, man plants trees in same spot. 37 years later, his masterpiece takes our breath away The young teenager Jadav “Molai” Payeng decided to help nature out a little bit and started planting trees over thirty years ago. He planted the seeds next to a very and deserted sandbar closely to his birthplace in the Assam region, India. Jadav wanted to create a habitat for wildlife and oppose people who were cutting trees down. Jadav later decided that he would dedicate his life to building his own forest and planting trees. For almost every day for 37 years, the man planted seeds and has successfully built a whole new ecosystem. Meet the People Planting Trees After Canada's Lumber Harvest Luc Forsyth can’t decide which memories best illustrate the glorious hardship of his six seasons as a tree planter in Canada. Maybe it was his first day, when his crew leader told him to “deal with it” after hours of work in new boots had shredded his feet. Maybe it was years later, when his hands were so stiff after seemingly endless days of cold rain that he urinated on them in a desperate attempt to defrost himself. Or perhaps it was the many raucous nights in the nearest logging town, shooting pool and doing laundry with the rest of the planting crew, a group of strangers bonded by adversity.

A Moment of Possibility and Peril – Bono I know it’s unusual having a rock star hanging out at the UN Plaza but I’ll tell you what’s really unusual: having a load of ambassadors jumping up and down shouting their heads off at a rock and roll show. That is unusual, very unusual, and that’s what we had last night. At least you were not shouting at each other; I thought that was good. It is an honor for this troubadour to be in such esteemed company. I couldn’t be prouder to share the stage with this Taoiseach and this Tánaiste, who are, infuriatingly, younger than me — younger than the rock singer, and smarter! 7 Fiction Books That Will Light You On Fire – Personal Growth – Medium Besides reading to feel, most of us read to learn. We want to know what we need to know when we need it, and so we keep pushing the number of books. Higher. One more.

Cat Brings Her Kittens to Man Who Helped Her and Gave Her Food - She Won’t Let Him Go. A cat was found with a can stuck on her head behind a (satellite) auto dealership in Eastern Oklahoma. She was confused and meowing for help. A sales person from the dealership freed her from the can but the kitty quickly wandered off.