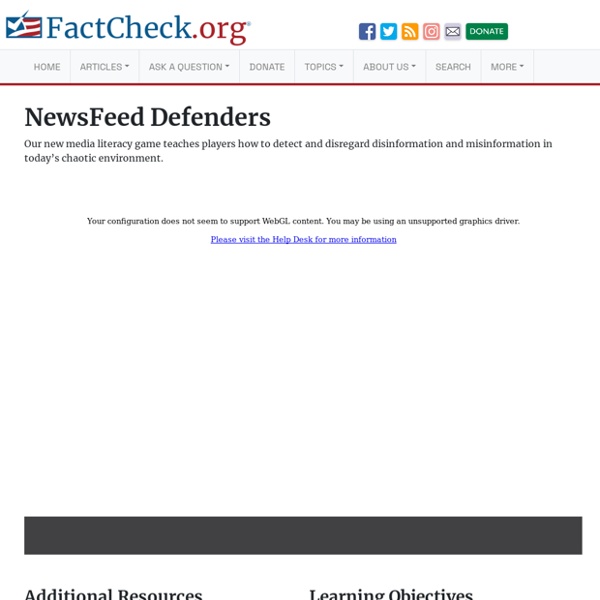 Our new media literacy game teaches players how to detect and disregard disinformation and misinformation in today’s chaotic environment. Learning Objectives Identify markers of verification, transparency, accountability, and independence in news stories.Define and identify problematic news items, and other news-related types of misinformation.Explain a variety of strategies to verify images and information.Evaluate text for bias based on word choices and framing methods.Use third-party information to judge the credibility of a source.Evaluate the benefits and challenges of digital news and social media to a democratic society. Teacher Extension Pack Make your students’ gameplay more meaningful by using our activity and assessment set designed specifically for NewsFeed Defender. This easy-to-use Extension Pack helps you give context and purpose to the game, as well as reinforce and assess the game concepts. Download the Teacher Extension Pack

There is no middle ground for deep disagreements about facts Consider how one should respond to a simple case of disagreement. Frank sees a bird in the garden and believes it’s a finch. Standing beside him, Gita sees the same bird, but she’s confident it’s a sparrow. What response should we expect from Frank and Gita? Digital Collections, Available Online Collection Alan Lomax Collection The Alan Lomax Collection includes ethnographic field documentation, materials from Lomax’s various projects, and cross-cultural research created and collected by Alan Lomax and others on traditional song, music, dance, and body movement... Contributor: Association for Cultural Equity - Archive of American Folk Song - Lomax, Alan - American Folklife Center Date: 1933 Collection Items: View 6,612 Items Collection

10 Ways to Spot a Fake News Article - EasyBib Blog For many of us, 2016 is going down as a year to forget. Election upsets, Zika, the Syrian crisis, and unfortunately tons of fake news about all of the above and everything in between. Denzel Washington was recently quoted as saying, “If you don’t read the newspaper, you’re uninformed. If you do read the newspaper, you’re misinformed.” 2nd Grade Students Cover Their Teacher’s Dress In Drawings, And Her Story Takes Over The Internet Sometimes arming a bunch of 8-year-olds with paint and markers doesn’t have to result in a disaster. In fact, it can turn into a beautiful work of art! This is exactly what happened to Haley Curfman, a 2nd-grade teacher in Blackwell, Oklahoma. Haley bought a beautiful white dress, set it up in her classroom and encouraged her students to draw on it.

Did a Black Woman Named Malinda Borden Perish Because Titanic's Lifeboats Were 'Whites Only?' A photograph purportedly showing a woman named “Malinda Borden” is frequently shared on social media along with the claim that she had worked aboard the RMS Titanic and drowned at sea when that ship sank on its maiden voyage, as lifeboat seats were only made available to white passengers. Her name, according to the viral Facebook post, was nearly lost to history because the black workers who perished during the disaster were listed as property that was lost, rather than being included in the list of victims: <img class="aligncenter size-full wp-image-186737" src=" alt="" data-recalc-dims="1">TITANIC VICTIM MALINDA BORDEN was drowned at sea as she was working aboard the Titanic.

Smile! Could the pandemic lead to happier times? In January 2018, a Yale University professor named Laurie Santos launched a course, Psychology and the Good Life, which quickly became the most popular class in the institution’s 319-year-history. After 13 years at Yale, in 2016, the 44-year-old had taken charge of one of the university’s residential colleges and had become alarmed by widespread mental illness and stress. She wanted to explain the paradox of why so many students were still suffering, having achieved their dreams of being admitted to Yale and having met society’s definition of success. Santos created the lecture series in a bid to teach her students what really mattered – to help them carve out lives of meaning and contentment. Within a few days of the course’s launch, roughly a quarter of Yale’s entire undergraduate population had signed up.

Don't be fooled by fake images and videos online One month before the 2016 U.S. presidential election, an “Access Hollywood” recording of Donald Trump was released in which he was heard lewdly talking about women. The then-candidate and his campaign apologized and dismissed the remarks as harmless. At the time, the authenticity of the recording was never questioned.

Mom Asks Pediatrician About The Idea Of Kids Going To School Again, Receives A Reality Check As the back-to-school date in the US is slowly approaching, more and more parents are seriously doubting whether to send their kids to school. With Covid-19 infections rising in 41 states and southern hotspots already undertaking crisis measures on Thursday, many feel like reopening schools physically would be hurried and plain dangerous. So one mom and book author from Atlanta named Aesha Saeed turned to her children’s pediatrician for advice.

Taking Notes By Hand May Be Better Than Digitally, Researchers Say Laptops are common in lecture halls worldwide. Students hear a lecture at the Johann Wolfang Goethe-University on Oct. 13, 2014, in Frankfurt am Main, Germany. Thomas Lohnes/Getty Images hide caption toggle caption Thomas Lohnes/Getty Images Laptops are common in lecture halls worldwide. Media Bias Chart, 3.1 Minor Updates Based on Constructive Feedback - ad fontes media So why is it time for another update to the Media Bias Chart? I’m a strong believer in changing one’s mind based on new information. That’s how we learn anyway, and I wish people would do it more often. I think it would lead to nicer online discussions and less polarization in our politics. Perhaps people don’t “change their minds based on new information” as much as they should because it is often framed more negatively as “admitting you are wrong.”

What Do We Know About Children and Coronavirus Transmission? Key Points: With just a few weeks remaining before schools in the U.S. are scheduled to reopen, and the federal government encouraging in-person schooling, there remain many questions about the risk COVID-19 poses to children and their role in transmission of the disease. Indeed, other countries have not reopened schools with the levels of community transmission found in the U.S., coupled with its insufficient testing and limited contact tracing.Our review of the latest available data indicates that, while children who are infected with COVID-19 are more likely to be asymptomatic and less likely to experience severe disease (though a small subset become quite sick), they are capable of transmitting to both children and adults.What remains unclear and where evidence is still needed is: whether children are less likely to be infected than adults and, when infected, the frequency and extent of their transmission to others. Introduction Current Evidence on COVID-19 and Children Conclusion

The 12 cognitive biases that prevent you from being rational The human brain is capable of 1016 processes per second, which makes it far more powerful than any computer currently in existence. But that doesn't mean our brains don't have major limitations. The lowly calculator can do math thousands of times better than we can, and our memories are often less than useless — plus, we're subject to cognitive biases, those annoying glitches in our thinking that cause us to make questionable decisions and reach erroneous conclusions. Here are a dozen of the most common and pernicious cognitive biases that you need to know about. Before we start, it's important to distinguish between cognitive biases and logical fallacies. A logical fallacy is an error in logical argumentation (e.g. ad hominem attacks, slippery slopes, circular arguments, appeal to force, etc.).