Have You Heard of The Great Forgetting? It Happened 10,000 Years Ago & Completely Affects Your Life. (Excerpted from the book, The Story of B) With every audience and every individual, I have to begin by making them see that the cultural self-awareness we inherit from our parents and pass on to our children is squarely and solidly built on a Great Forgetting that occurred in our culture worldwide during the formative millennia of our civilization. 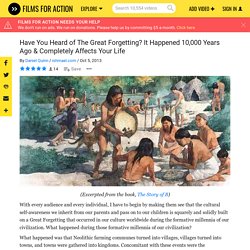 What happened during those formative millennia of our civilization? What happened was that Neolithic farming communes turned into villages, villages turned into towns, and towns were gathered into kingdoms. Concomitant with these events were the development of division of labor along craft lines, the establishment of regional and interregional trade systems, and the emergence of commerce as a separate profession. We can hardly be surprised that the forgetting took place. 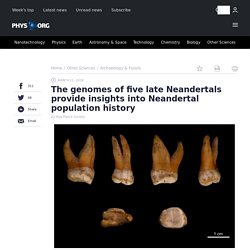 These late Neandertals are all more closely related to the Neandertals that contributed DNA to modern human ancestors than an older Neandertal from the Altai Mountains that was previously sequenced. Neandertals had the capacity to perceive and produce human speech. Neandertals—the closest ancestor to modern humans—possessed the ability to perceive and produce human speech, according to a new study published by an international multidisciplinary team of researchers including Binghamton University anthropology professor Rolf Quam and graduate student Alex Velez. 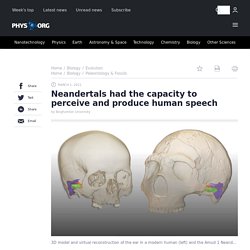 "This is one of the most important studies I have been involved in during my career", says Quam. "The results are solid and clearly show the Neandertals had the capacity to perceive and produce human speech. Could Neanderthals Speak? The Ongoing Debate Over Neanderthal Language. Did Neanderthals have language? 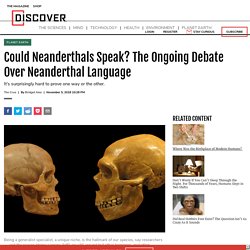 Before trying to answer that, I should admit my bias: I’m team Neanderthal. As an anthropologist who studies our evolutionary cousins, I’ve seen plenty of evidence suggesting Neanderthals were competent, complex, social creatures. Prehistoric female hunter discovery upends gender role assumptions. Randall Haas, an archaeologist at University of California, Davis, recalls the moment in 2018 when his team of researchers gathered around the excavated burial of an individual lain to rest in the Andes Mountains of Peru some 9,000 years ago. 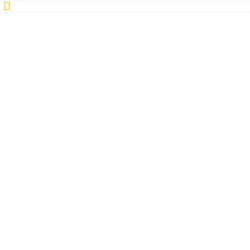 Along with the bones of what appeared to be a human adult was an impressive—and extensive—kit of stone tools an ancient hunter would need to take down big game, from engaging the hunt to preparing the hide. "He must have been a really great hunter, a really important person in society"—Haas says that’s what he and his team were thinking at the time. But further analysis revealed a surprise: the remains found alongside the toolkit were from a biological female. What's more, this ancient female hunter was likely not an anomaly, according to a study published today in Science Advances. Defining Moment in Human Evolution: Turbulent Era Sparked Leap in Human Behavior, Technology 320,000 Years Ago. Drill core site. 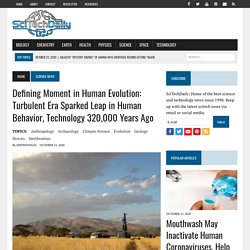 In seeking to understand the major evolutionary transition they had uncovered at Olorgesailie in 2018, Potts and his team had been frustrated by a large 180,000-year gap in the region’s environmental record. To learn about how the region changed during that period, they had to look elsewhere. They arranged to have a Nairobi company drill in the nearby Koora basin, extracting sediment from as deep into the earth as they could. Origins. Mysterious human ancestor finds its place in our family tree. When it comes to deciphering our ancient family tree, DNA from fossils is the new gold standard. 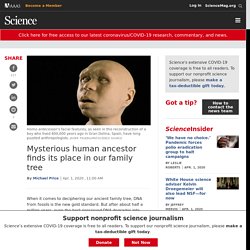 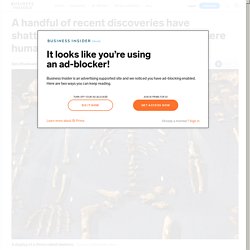 Scientists Extract Complete Human Genome From 5,700-Year-Old “Chewing Gum” – Here’s What They Found. Researchers from the University of Copenhagen have succeeded in extracting a complete ancient human genome from a 5,700-year-old birch pitch. 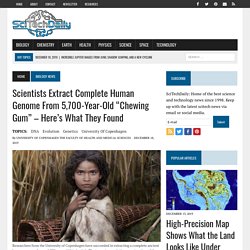 The image is an artistic reconstruction of the woman who chewed the birch pitch and has been named Lola. Credit: Illustration by Tom Björklund. Ötzi the Iceman's Unfortunate Last Journey Possibly Uncovered. When Ötzi the Iceman died 5,300 years ago, he went to his final resting place alongside at least 75 species of mosses and liverworts. 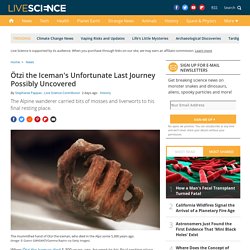 Now, new research finds that this seemingly unassuming flora reveals the details of Ötzi's last journey. Some of the species found entombed in ice with the famous mummy are known to grow at the elevation where Ötzi died. Others were likely carried there by animals such as the alpine ibex. But the Iceman also brought some species with him, both deliberately and inadvertently, according to the new paper published Oct. 30 in the journal PLOS ONE. Many of these species grow in the nearby valley of Schnalstal in the Alps, suggesting that Ötzi made his final trek to the high mountains through this valley. This Montana Man Officially Has The Oldest American DNA Ever Tested. TwitterDarrell “Dusty” Crawford didn’t even want to get his DNA tested. He merely did it to assuage his brother, who died before the results came back. Before Alvin “Willy” Crawford’s heart gave out, the Montana man asked his brother, Darrell “Dusty” Crawford to get his DNA tested.

Face of the Denisovans? Portrait of a Teen Revealed by Her DNA. Based on ancient DNA methylation patterns, a portrait of a juvenile female Denisovan has been recreated. Only two weeks ago I wrote a news piece for Ancient Origins in which I listed all of the known Denisovan remains, which amounted to a finger bone, a few teeth, and a lower jawbone. Nevertheless, from these scanty remains a team of researchers reporting in the journal Cell have produced reconstructions of these long-lost human relatives based on patterns of methylation extracted from ancient DNA. Studying Rare Denisovan DNA. An Archaeological Puzzle on the Danube. The Denisovans: New Finds are Illuminating the Mysterious Ancient Humans - The Crux. Nestled in foothills of Russia’s Altai Mountains, Denisova Cave has been a research mecca since 2010, when fossil DNA from the site revealed a previously unknown human lineage, now called the Denisovans.

Scientists have been working hard to reconstruct the cave’s history, through ongoing excavations as well as new analyses of materials recovered years ago. First, what everyone wants to know: Yes, they found more human remains. Humans Interbred with Four Extinct Hominin Species, Research Finds. As anatomically modern Homo sapiens migrated out of Africa and around the rest of the world, they met and interbred with at least four different hominin species, according to new research from the University of Adelaide, Australia.

Strikingly, of these hominins, only Neanderthals and Denisovans are currently known; the others remain unnamed and have only been detected as traces of DNA surviving in different modern populations. Reconstruction of Homo floresiensis, an extinct hominin species that lived on the Indonesian island of Flores between 74,000 and 18,000 years ago. Image credit: Elisabeth Daynes. “Each of us carry within ourselves the genetic traces of these past mixing events,” said Dr. Earliest modern human found outside Africa. Image copyright Katerina Harvati, Eberhard Karls Uni Tüb.

Giant half-ton bird nearly 12 feet tall living alongside ancient Europeans. Giant birds once roamed Madagascar, New Zealand and Australia. Prehistoric People Built Little Artificial Islands in Scottish Lochs. Pleistocene Epoch: Facts About the Last Ice Age. The Pleistocene Epoch is typically defined as the time period that began about 2.6 million years ago and lasted until about 11,700 years ago. The most recent Ice Age occurred then, as glaciers covered huge parts of the planet Earth.

There have been at least five documented major ice ages during the 4.6 billion years since the Earth was formed — and most likely many more before humans came on the scene about 2.3 million years ago. Neanderthals and modern humans diverged at least 800,000 years ago. Denisovans are traced to Tibet click 2x. Stonehenge: DNA reveals origin of builders. The Hominins We’ve Been Calling Denisovans Are More Diverse Than Previously Thought.

Juliet Brophy: How a new species of ancestors is changing our theory of human evolution. Neanderthals and Denisovans Shared a Siberian Cave for Thousands of Years, New Research Suggests. Older Neandertal survived with a little help from his friends. An older Neandertal from about 50,000 years ago, who had suffered multiple injuries and other degenerations, became deaf and must have relied on the help of others to avoid prey and survive well into his 40s, indicates a new analysis published Oct. 20 in the online journal PLoS ONE. “More than his loss of a forearm, bad limp and other injuries, his deafness would have made him easy prey for the ubiquitous carnivores in his environment and dependent on other members of his social group for survival,” said Erik Trinkaus, study co-author and professor of anthropology in Arts & Sciences at Washington University in St.

Louis. Known as Shanidar 1, the Neandertal remains were discovered in 1957 during excavations at Shanidar Cave in Iraqi Kurdistan by Ralph Solecki, an American archeologist and professor emeritus at Columbia University. Previous studies of the Shanidar 1 skull and other skeletal remains had noted his multiple injuries. Cheddar Man changes the way we think about our ancestors. Cave girl was half Neanderthal, half Denisovan. Origins agriculture click 2x. The Great Breakup: The First Arrivals to the Americas Split Into Two Groups. Humans are responsible for the sudden disappearance of world's largest mammals. Humans likely had an important role to play in the extinction of the wooly mammoth.

Human ancestry correlates with language and reveals that race is not an objective genomic classifier. Neanderthals were distilling tar 200 thousand years ago in Europe. Evidence that humans had farms 30,000 years earlier than previously thought. In a Lost Baby Tooth, Scientists Find Ancient Denisovan DNA - The New York Times. Ancient humans may have been mothers to some Neanderthals earlier than we thought - The Verge. What Are Our Best Clues To The Evolution Of Fire-Making? : 13.7: Cosmos And Culture. Morocco Fossils Are 100,000 Years Older Than Earliest Recorded Modern Humans.

Morocco Fossils Are 100,000 Years Older Than Earliest Recorded Modern Humans. 'First of our kind' found in Morocco. Did Humans Arrive in America a Hundred Thousand Years Earlier Than We Thought? DNA Samples Reveal That Aboriginals Have Been in Australia For About 50,000 Years Already. Australia was colonized by a single group 50,000 years ago. Indigenous Australians most ancient civilisation on Earth, DNA study confirms. Denmark - History - Prehistory. Where Did The First Americans Come From? We were all told they walked over a land bridge from Asia. Now that theory’s being called into question.