On the Igbo Art of Storytelling. Untitled. The grid comes from the role-playing game Dungeons & Dragons, but has been long divorced from that context. 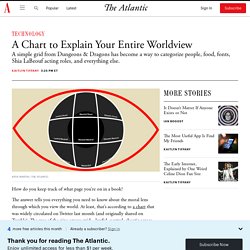 It is now used by people who have never sat around a table pretending to be druids and clerics, or possibly even heard of the game. Alignment charts are easy to customize, and they have a crisp legibility. They spread easily because they clash with other people’s instincts: I get viscerally angry looking at an absolutely wrong alignment chart of Gilmore Girls characters, which might prompt me to make my own. Here’s a suit alignment chart pic.twitter.com/nQ44D5NugM — Emilia Petrarca (@EmiliaPetrarca) March 5, 2019 The pleasure of filling out an alignment chart is similar to that of playing a simple brainteaser, or completing an elementary-school worksheet: You’re making judgment calls, sorting, putting objects into little boxes—and you end up with something neat and composed.

Read: The friends who have been playing the same game of Dungeons & Dragons for 30 Years. Culture - Every story in the world has one of these six basic plots. “My prettiest contribution to the culture” was how the novelist Kurt Vonnegut described his old master’s thesis in anthropology, “which was rejected because it was so simple and looked like too much fun”. 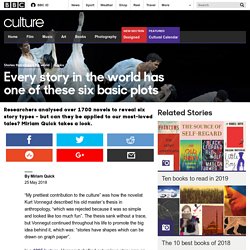 The thesis sank without a trace, but Vonnegut continued throughout his life to promote the big idea behind it, which was: “stories have shapes which can be drawn on graph paper”. In a 1995 lecture, Vonnegut chalked out various story arcs on a blackboard, plotting how the protagonist’s fortunes change over the course of the narrative on an axis stretching from ‘good’ to ‘ill’. The arcs include ‘man in hole’, in which the main character gets into trouble then gets out again (“people love that story, they never get sick of it!”) And ‘boy gets girl’, in which the protagonist finds something wonderful, loses it, then gets it back again at the end. “There is no reason why the simple shapes of stories can’t be fed into computers”, he remarked. 1. 2. 3. 4. 5. 6. Story type: Rags to riches. Periodic Table of Storytelling. How a Book About Grover Revealed to Me the Wide World of Literature.

A history of storytelling through pictures. African rock art Rock art is the practice of engraving, drawing, or painting images onto immovable rock surfaces, and is one of the oldest material forms of human expression in the world, dating back 30,000 years in Africa. 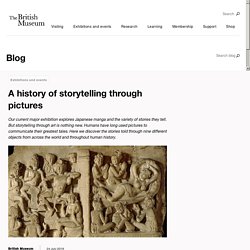 Rock art researchers grapple with questions of what rock art means, what stories the images tell and how we can interpret and understand them. In some cases the meaning behind these enigmatic images is hard to interpret but sometimes they convey clear narratives and messages about people’s social lives. The image below comes from the Acacus Mountains in Libya and shows an intimate moment between two people, an individual with an ornate hairstyle washing or attending to another’s hair. It is part of a larger scene interpreted as preparations for a wedding. Hemingway’s “For Sale: Baby Shoes, Never Worn” Re-Imagined By Other Authors. L. 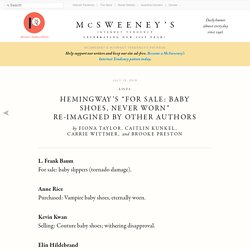 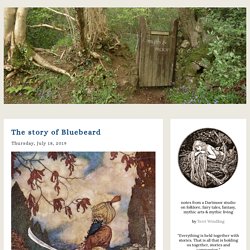 Perrault was one in a group of writers who socialized in the literary salons of Paris, collectively creating a vogue for literature inspired by peasant folk tales. These new stories were called contes des feés, from which our modern term "fairy tales" derives -- but the contes des feés of the French salons were intended for adult readers. 7,000 Year Old Indigenous Story Proved True. J.K. Rowling found out her books helped save this baby's life. Her response was magic.

On the worst night, when our 1-pound daughter was fading in the darkness of her incubator, my husband opened a book and began to read aloud. 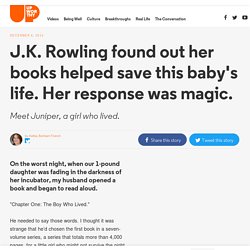 "Chapter One: The Boy Who Lived. " He needed to say those words. I thought it was strange that he’d chosen the first book in a seven-volume series, a series that totals more than 4,000 pages, for a little girl who might not survive the night. The Odyssey Map. Edit × 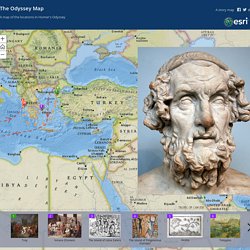 The Cyclops. Oral Tradition - The Oldest True Stories in the World. Nothing stirred in the relentless midday heat. The gum trees appeared exhausted, nearly drained of life. The hunters crouched in the foliage, their long, sharp spears poised to unleash at a moment’s notice. The giant birds that were the objects of their attention strode slowly, elegantly, unsuspecting. Most of these creatures were about 7 feet tall. The meat from even one animal offered the tribe sustenance for an extended period of time—but the hunters knew that this reward could come at a price.