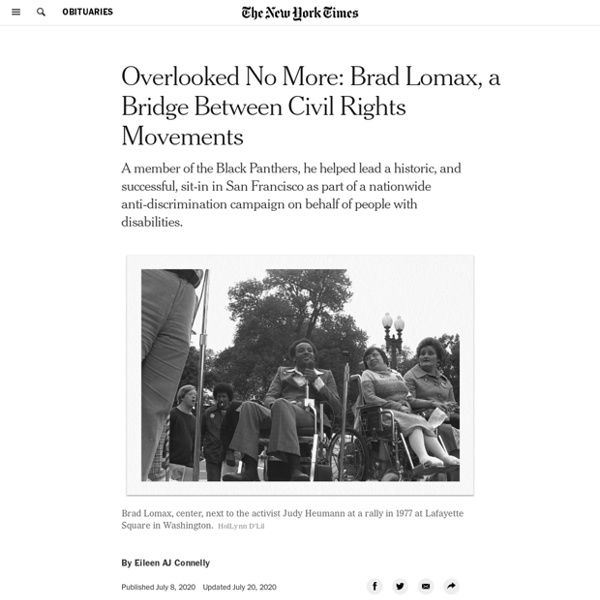 Alabama in 1963 was an epicenter of the civil rights movement, with lunch counter sit-ins, protest marches and other actions aimed at dismantling state-sponsored segregation. There, for the first time, Brad encountered signs designating some public spaces for white people and some for Black people. After graduating from Benjamin Franklin High School in Philadelphia in 1968, Lomax considered joining the military, but as the war in Vietnam raged, with Black soldiers bearing a disproportionate share of the burden, he decided instead to attend Howard University in Washington. That year — inexplicably, it seemed — Lomax began falling as he walked. Then he learned that he had multiple sclerosis. As the disease progressed, he began using a wheelchair — and it opened his eyes to another form of discrimination. The relationships he built across the two communities would prove vital during the 504 Sit-in two years later.

untitled Most of us have at least a few regrets from our childhood related to the way we at times interacted with our parents. Maybe there have been moments when you got mad at them for not buying you a certain toy. Or perhaps at times, you acted like an ungrateful little brat despite how much your parents have done for you. And when you think about those moments, the feeling is so soul-crushing that it seems like you would do almost anything for a chance to go back and change them. untitled As the coronavirus pandemic continues to spread throughout the U.S. despite mask mandates and social distancing measures, more than 150 medical experts, scientists and other health professionals signed a letter organized by a prominent consumer group and delivered to government leaders Thursday calling for new shutdowns to bring case counts down and “hit the reset button” to implement a more effective response. The letter, which was organized by consumer group U.S. PIRG and sent to the Trump administration, congressional leaders and state governors, urges leaders to “shut it down now and start over,” saying the government must “take bold action to save lives.” The signatories call for closing all non-essential businesses and opening restaurants for takeout only, with Americans leaving their houses “only to get food and medicine or to exercise and get fresh air.” The letter also says interstate travel should be shut down to keep the virus from spreading from state to state. Crucial Quote

Overlooked No More: Kate Worley, a Pioneer Writer of Erotic Comics The Tribunal concluded: “The sexual activity is portrayed in the context of permanent, loving relationships between articulate, caring and reasoning characters.” “It was my favorite review of all time,” Kitchen said. By 1995, Worley and Waller separated, and the adventures of Omaha went on hiatus for more than a decade. Worley married the writer Jim Vance and moved to Tulsa, Okla., where they had a son, Jacob, and a daughter, Sarah. “During those 10 years we each did other projects,” Waller wrote in an email, “and though we tried occasionally to work together again, it was overwhelmingly difficult for both of us, because our breakup had been very long and very bad, something we managed to conceal from our fans till the very end.”

American Capitalism Is Brutal. You Can Trace That to the Plantation. A couple of years before he was convicted of securities fraud, Martin Shkreli was the chief executive of a pharmaceutical company that acquired the rights to Daraprim, a lifesaving antiparasitic drug. Previously the drug cost $13.50 a pill, but in Shkreli’s hands, the price quickly increased by a factor of 56, to $750 a pill. At a health care conference, Shkreli told the audience that he should have raised the price even higher. Trump’s 'blue-collar boom' is a myth If you’re beating inflation by 1%, is that a “boom”? President Trump thinks so. In a speech at the annual gathering of the ultra-rich in Davos, Switzerland on Jan. 21, Trump declared that his presidency has generated a “blue-collar boom” and a “roaring geyser of opportunity.” “The American Dream is back,” Trump said. “No one is benefitting more than America’s middle class.”

10 Pics Of People Before And After They Were Asked To Smile (New Pics) The Dalai Lama said, "A simple smile. That’s the start of opening your heart and being compassionate to others." Smiles have the ability to change one's whole day, and not only to the one that's smiling, but also to those who see a smile. It's just a simple expression, and yet it may be the most powerful, as it's the most positive one. untitled Key Points: With just a few weeks remaining before schools in the U.S. are scheduled to reopen, and the federal government encouraging in-person schooling, there remain many questions about the risk COVID-19 poses to children and their role in transmission of the disease. Indeed, other countries have not reopened schools with the levels of community transmission found in the U.S., coupled with its insufficient testing and limited contact tracing.Our review of the latest available data indicates that, while children who are infected with COVID-19 are more likely to be asymptomatic and less likely to experience severe disease (though a small subset become quite sick), they are capable of transmitting to both children and adults.What remains unclear and where evidence is still needed is: whether children are less likely to be infected than adults and, when infected, the frequency and extent of their transmission to others. Introduction Current Evidence on COVID-19 and Children

Disability in kids: Private special education school without restraint 14-year-old Alex Campbell, who has autism, is one of the most powerful voices in the movement to better document and regulate restraint in schools. USA TODAY This story was produced by the Teacher Project, an education reporting fellowship at Columbia Journalism School. The 1619 Project In August of 1619, a ship appeared on this horizon, near Point Comfort, a coastal port in the English colony of Virginia. It carried more than 20 enslaved Africans, who were sold to the colonists. No aspect of the country that would be formed here has been untouched by the years of slavery that followed. On the 400th anniversary of this fateful moment, it is finally time to tell our story truthfully. The 1619 ProjectThe 1619 Project is an ongoing initiative from The New York Times Magazine that began in August 2019, the 400th anniversary of the beginning of American slavery. It aims to reframe the country’s history by placing the consequences of slavery and the contributions of black Americans at the very center of our national narrative.

Would You Rather Be Born Smart or Rich? I know, I know, you'd rather be born smart and rich (and charming, and with a lustrous head of hair, and a voice like Michael Bolton's). But if you had to choose? Chances are, your answer depends on whether you think the U.S. economy is a meritocracy—that intelligence and ambition are more important to lifelong success than the circumstances of your birth. Is This 'I'm Sorry I'm Late. I Had a Lot To Learn' Protest Sign Real? Rumors are surging in the wake of George Floyd’s death and resulting protests against police violence and racial injustice in the United States. Stay informed. Read our special coverage, contribute to support our mission, and submit any tips or claims you see here. In June 2020, an image supposedly showing a white demonstrator at a Black Lives Matter protest holding a sign reading “I’m Sorry I’m Late. I Had A Lot To Learn” went viral on social media:

The Stock Market Is Near Correction Levels What if I told you the fastest stock market recovery in history is just a misunderstanding? You’ve probably seen headlines like this one: Or this one: Doesn’t it seem off that the stock market is blazing past record highs while the economy is in freefall? And at the same time a record 50 million Americans are sitting around without a job?