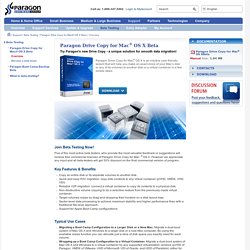 However we appreciate any input and all beta-testers will get 30% discount on the final commercial version of program. Copy an entire disk or its separate volumes to another disk.Quick and easy P2V migration: copy disk contents to any virtual container (pVHD, VMDK, VHD, VDI)Reliable V2P migration: connect a virtual container to copy its contents to a physical disk.Non-destructive volume copying to do a selective restore from the previously made virtual container.Target volumes resize by drag-and-dropping their borders on a disk layout map.Sector-level data processing to achieve maximum stability and higher performance than with a traditional file-level approach.Support for Apple Boot Camp configurations.Migrating a Boot Camp Configuration to a Larger Disk or a New Mac.

Can I convert a mac pro to a vm image? Fortysomething Geek: Convert a Physical Mac into a VM Guest under VMware Fusion 5. In the PC World, there many cool migration tools to convert a live, physical and running Windows machine into a VM (Virtual Machine) guests. 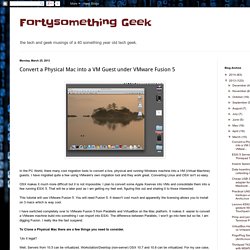 I have migrated quite a few using VMware's own migration tool and they work great. Converting Linux and OSX isn't so easy. OSX makes it much more difficult but it is not impossible. I plan to convert some Apple Xserves into VMs and consolidate them into a few running ESXi 5. That will be a later post as I am getting my feet wet; figuring this out and sharing it to those interested. This tutorial will use VMware Fusion 5. I have switched completely over to VMware Fusion 5 from Parallells and VirtualBox on the Mac platform. To Clone a Physical Mac there are a few things you need to consider. 1)Is it legal? Well, Servers from 10.5 can be virtualized. 2) You need to build a base OS build from scratch to act as your Cloning "middleman. " 3) You should have a spare USB drive or network share to store your "cloned disk images. 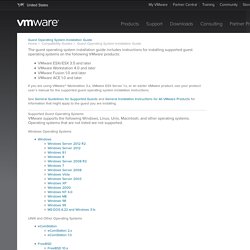 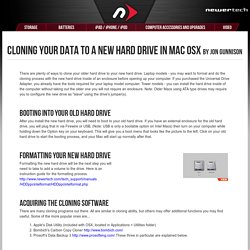 Laptop models - you may want to format and do the cloning process with the new hard drive inside of an enclosure before opening up your computer. If you purchased the Universal Drive Adapter, you already have the tools required for your laptop model computer. Tower models - you can install the hard drive inside of the computer without taking out the older one you will not require an enclosure. Note: Older Macs using ATA type drives may require you to configure the new drive as "slave" using the drive's jumper(s).

Booting into Your Old Hard Drive After you install the new hard drive, you will need to boot to your old hard drive. Formatting Your New Hard Drive Acquiring The Cloning Software There are many cloning programs out there. Apple's Disk Utility (10.3.x or Later) Disk Utility does have the ability to clone your hard drives just as well as any other software out there. Prosoft's Data Backup 3. Bootable clone with Maverick installed - Apple (Mac) Discussion & Support - Neowin Forums. Clone Mac hard drive to create copy of Mac drive to external drive. Carbon Copy Cloner.