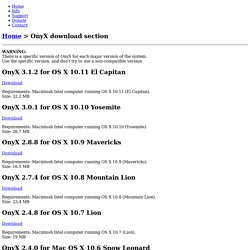 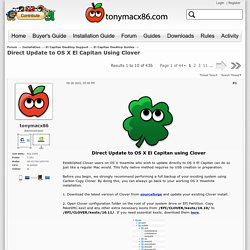 This fully native method requires no USB creation or preparation. Before you begin, we strongly recommend performing a full backup of your existing system using Carbon Copy Cloner. By doing this, you can always go back to your working OS X Yosemite installation. 1. Download the latest version of Clover from sourceforge and update your existing Clover install. 2. Open Clover configuration folder on the root of your system drive or EFI Partition. 4. The Complete Guide To Backing Up Your Hackintosh With Carbon Copy Cloner. Though Hackintoshes are usually pretty stable, you can never be too careful when updating your Hackintosh's version of Mac OS X. 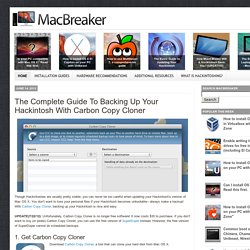 Download Carbon Copy Cloner, a tool that can clone your hard disk from Mac OS X. Cloning is making an exact, bootable copy of your main hard disk, onto a separate hard disk or hard disk partition. Editing NVDIA startup kext to hopefully install GTX 960...How do I do it? : hackintosh. Hackintosh BIOS Settings. When starting to install or configure a Hackintosh, you must begin with Bios configuration, without proper Bios configuration system may reboot, kernel panic or cause some other issues, this guide shows how to configure bios for a hackintosh When thinking about configuring BIOS, the configuration depends on the bootloader that is being used, two known boot-loader for Hackintosh are Chameleon and Clover, Chameleon is a BIOS type boot-loader, Clover can be installed as UEFI boot-loader as well as BIOS type boot-loader. 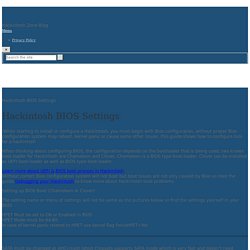 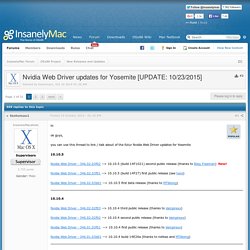 Rebranding Broadcom 802.11a/b/g/n Cards as AirPort Extreme. In this guide, I’ll be showing you on how to rebrand a Broadcom card which OSX detects as a Third Party Wireless card to Apple’s genuine Airport card. 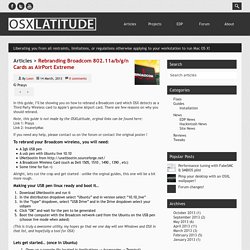 There are few reasons on why you should rebrand. Note, this guide is not made by the OSXLatitude, orginal links can be found here: Link 1: Prasys Link 2: InsanelyMac If you need any help, please contact us on the forum or contact the original poster ! To rebrand your Broadcom wireless, you will need: A 2gb USB penA usb pen with Ubuntu live 10.10UNetbootin from Broadcom Wireless Card (such as Dell 1505, 1510 , 1490 , 1390 , etc)Some time for fun =) Allright, lets cut the crap and get started – unlike the orginal guides, this one will be a bit more rough.

Making your USB pen linux ready and boot it… Top 10 Best Laptops for Hackintosh 2015. For those who don’t know, a Hackintosh laptop is basically a laptop that is completely non-Apple, however, is hacked in a certain way that you can actually run Apple’s Mac OS on it. 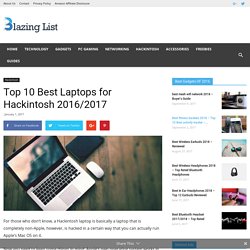 Now you need to keep some things in mind, Apple’s own operating system works in conjunction with the hardware that goes inside the Macbooks, and while it may be very, very simple to think that the same hardware can easily be found inside laptops that are not made by Apple, there are obvious restrictions that are put into Macbooks as well.

What this means is that even if a Macbook and a laptop both have similar specs, it wouldn’t be an easy job to make the laptop run the OS that is used by the Macbook. In comes the Hackintosh, this perhaps is the only way to use Apple’s OS on a laptop, and in case you are wondering why people don’t just go for the Macbook right away, then think about the price difference for a second. That’s because the OS can’t properly communicate with the hardware. The Best USB WiFi Adapters For Your Hackintosh. If you want to connect your Hackintosh to the internet via WiFi, you'll usually have to set up a separate wireless adapter (also known as a WiFi card). 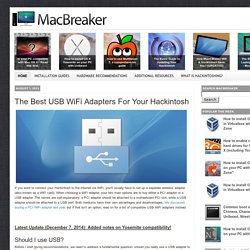 When choosing a WiFi adapter, your two main options are to buy either a PCI adapter or a USB adapter. The names are self-explanatory; a PCI adapter should be attached to a motherboard PCI slot, while a USB adapter should be attached to a USB port. Both mediums have their own advantages and disadvantages. We discussed buying a PCI WiFi adapter last year, but if that isn't an option, read on for a list of compatible USB WiFi adapters instead. Latest Update (December 7, 2014): Added notes on Yosemite compatibility! First hackintosh with Windows dual boot using Intel NUC DC3217BY. My friend recently introduced me to the Intel NUC (DC3217BY). 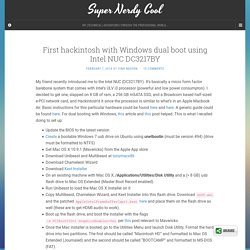 It’s basically a micro form factor barebone system that comes with Intel’s ULV i3 processor (powerful and low power consumpton). I decided to get one, slapped on 8 GB of ram, a 256 GB mSATA SSD, and a Broadcom based half-sized e-PCI network card, and Hackintosh’d it since the processor is similar to what’s in an Apple Macbook Air. Basic instructions for this particular hardware could be found here and here. A generic guide could be found here. For dual booting with Windows, this article and this post helped. Installation Guide For Using Clover on the Intel Haswell NUC. All right, so for the benefit of everyone I'll put a simple explanation of how to set up Clover on the NUC.For anyone that doesn't know, Clover aims to provide UEFI booting to UEFI capable boards and UEFI booting through emulation on older boards. 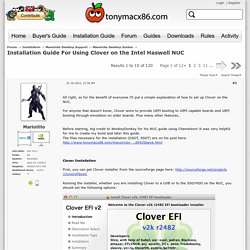 Plus many other features..Before starting, big credit to WonkeyDonkey for his NUC guide using Chameleon! It was very helpful for me to create my build and later this guide. The files necessary for the installation (DSDT, SSDT) are on his post here: InstallationFirst, you can get Clover installer from the sourceforge page here: the installer, whether you are installing Clover to a USB or to the SSD/HDD on the NUC, you should set the following options: All the selections are required in order to boot OS X successfully! UEFI only booting, since our board supports UEFI. Configuration/KernelAndKextPatches. Configuration / KernelAndKextPatches <key>KernelAndKextPatches</key><dict> ... </dict> This parameter group enables patching on-the-fly.

How to install Yosemite (Mac OS X 10.10) on a Pentium G3258 (Or other unsupported CPU) - OSx86 10.10 (Yosemite) How to install Mac OS X 10.10 Yosemite on an Intel Pentium G3258 (Should work for other OSs and CPUs) I received a message asking me to make a video on how to install Yosemite on a G3258 but I decided to just make a post about it. Most of the magic is just faking the CPUID with the Clover boot loader. Although I have only tried this method with a G3258 and Yosemite, I don't know of any reason why it wouldn't work to use this for another unsupported processor or another OS like Mountain Lion. For mine I just followed this guide by ###### on his forum site with the small exception of adding the fake CPUID in the config.plist.

UniBeast: Install OS X Yosemite on Any Supported Intel-based PC. The following guide is a complete walkthrough for installing a fresh version of OS X Yosemite. It requires no experience and all of the necessary installation and post-installation tools are available on tonymacx86.com. UniBeast is a tool that creates a bootable installer out of your downloaded version of OS X. In order to start fresh, you'll need access to a functional computer running Mac OS X Snow Leopard 10.6.8 or later. This is a requirement, as you need access to the Mac App Store to download OS X and create the installation drive. To start from scratch, booting the 10.6 Snow Leopard Retail DVD directly, check out iBoot + MultiBeast. Yay! How To Install OS X Yosemite Using Clover.

It can be confusing for those who have only ever used the more traditional Chameleon or Chimera. Clover is also in beta stage, and is not guaranteed to work well for all systems. Development has been fast and furious, with many major changes appearing in the code all the time.