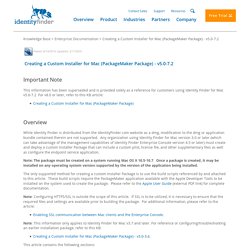 Any organization using Identity Finder for Mac version 3.0 or later (which can take advantage of the management capabilities of Identity Finder Enterprise Console version 4.5 or later) must create and deploy a custom Installer Package that can include a custom plist, license file, and other supplementary files as well as configure the endpoint service application. PackageMaker 3.0 & The New Flat Pkg Format. Volume Number: 26 Issue Number: 02 Column Tag: Installers by José R.C. 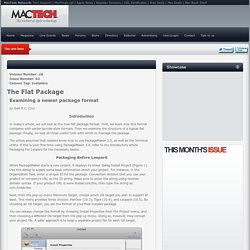 Cruz Introduction In today's article, we will look at the new flat package format. First, we learn how this format compares with earlier bundle-style formats. The article assumes that readers know how to use PackageMaker 3.0, as well as the Terminal utility. Packaging Before Leopard When PackageMaker starts a new project, it displays its sheet dialog Install Project (Figure 1). Next, from the pop-up menu Minimum Target, choose which OS target you plan to support at least. You can always change the format by choosing Install Properties from the Project menu, and then choosing a different OS target from the pop-up menu. Show What Files Are To Be Installed & Where Files Will Go in Mac OS X. In nearly all Installer and Package apps, you have the option to view exactly what files will be installed and where the installer wants to place them. 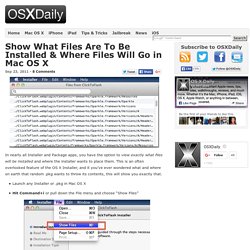 This is an often overlooked feature of the OS X Installer, and it you’ve ever wondered what and where on earth that random .pkg wants to throw its contents, this will show you exactly that. Launch any Installer or .pkg in Mac OS XHit Command+i or pull down the File menu and choose “Show Files” Scroll through the list (it’ll often be very long) and use the arrows to expand folders, or use the search box to look for specific locations If you’re a cautious individual, this is a great way to discover why exactly an installer wants administrative privileges, but it’s also great if you’re just curious.

Enjoy this? Packaging Product Components. Important: This document may not represent best practices for current development. 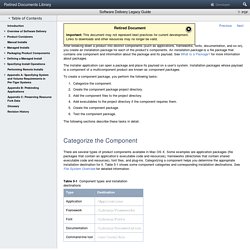 Links to downloads and other resources may no longer be valid. After breaking down a product into distinct components (such as applications, frameworks, fonts, documentation, and so on), you create an installation package for each of the product’s components. WhiteBox - PackageMaker How-to. PackageMaker How-to This document is targeted towards Mac OS X Developers with a minimum background on Mac OS X and notions like file paths, bundles, Developer tools. 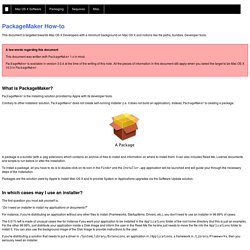 What is PackageMaker? PackageMaker is the installing solution provided by Apple with its developer tools. Contrary to other installers' solution, PackageMaker does not create self-running installer (i.e. it does not build an application). Instead, PackageMaker is creating a package: A package is a bundle (with a .pkg extension) which contains an archive of files to install and information on where to install them. To install a package, all you have to do is to double-click on its icon in the Finder and the Installer.app application will be launched and will guide your through the necessary steps of the installation. Packages are the solution used by Apple to install Mac OS X and to provide System or Applications upgrades via the Software Update solution. In which cases may I use an installer? Stupid tricks with pkgbuild. Starting with Xcode 3.2 on Snow Leopard, and installed by default on Mac OS X Lion are two new-ish packaging tools: /usr/bin/pkgbuild /usr/bin/productbuild These tools are ideal for use in scripted package building, and can replace much of the use of the packagemaker binary inside Apple’s PackageMaker application. pkgbuild can be used to create simple flat packages. productbuild can create more complex distribution packages, which may contain one or more flat packaged generated using pkgbuild. 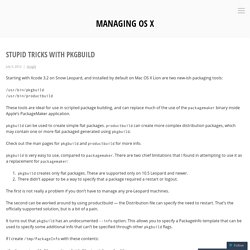 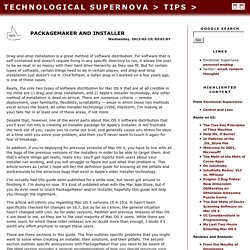 For software that is self-contained and doesn’t require living in any specific directory to run, it allows the user to be as neat or as messy with their hard drive hierarchy as they see fit. But for certain types of software, certain things need to be in certain places, and drag-and-drop installation just doesn’t cut it. ClickToFlash, a Safari plug-in I worked on a few years ago, is one of those cases. Really, the only two types of software distribution for Mac OS X that are at all credible in my mind are 1) drag-and-drop installation, and 2) Apple’s installer technology.

Despite that, however, one of the worst parts about Mac OS X software distribution that you’ll ever run into is creating an installer package for Apple’s Installer. I’ve actually had this guide semi-published for a while now, but never got around to finishing it. Apple Training Series: Mac OS X Deployment v10.6: A Guide to Deploying and Maintaining Mac OS X and Mac OS X Software. Flat Package Format - The missing documentation. 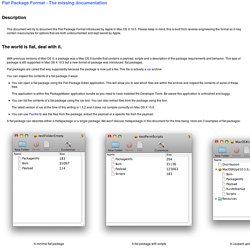 Please keep in mind, this is built from reverse-engineering the format so it may contain inaccuracies for options that are both undocumented and kept secret by Apple. The world is flat, deal with it. Packagemaker - Making OS X Installer Packages like a Pro - Xcode Developer ID ready pkg.