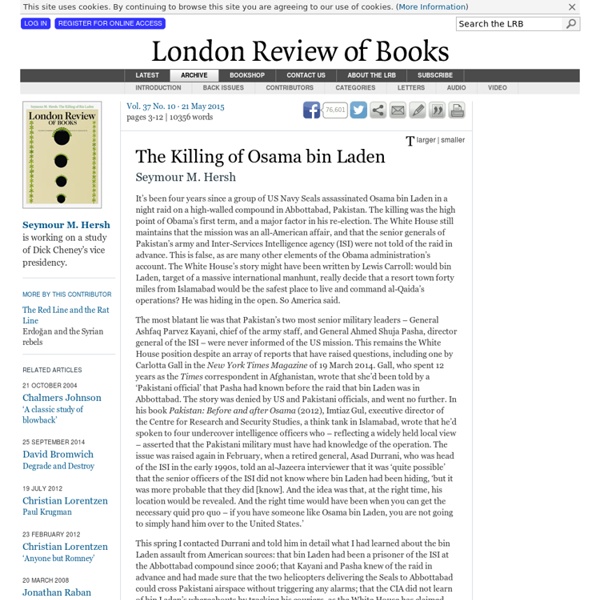 It’s been four years since a group of US Navy Seals assassinated Osama bin Laden in a night raid on a high-walled compound in Abbottabad, Pakistan. The killing was the high point of Obama’s first term, and a major factor in his re-election. The White House still maintains that the mission was an all-American affair, and that the senior generals of Pakistan’s army and Inter-Services Intelligence agency (ISI) were not told of the raid in advance. The most blatant lie was that Pakistan’s two most senior military leaders – General Ashfaq Parvez Kayani, chief of the army staff, and General Ahmed Shuja Pasha, director general of the ISI – were never informed of the US mission. ‘When your version comes out – if you do it – people in Pakistan will be tremendously grateful,’ Durrani told me. The major US source for the account that follows is a retired senior intelligence official who was knowledgeable about the initial intelligence about bin Laden’s presence in Abbottabad. Related:  Interesting

www.bbc Explore BBC Earth's unique interactive, personalised just to you. Find out how, since the date of your birth, your life has progressed; including how many times your heart has beaten, and how far you have travelled through space. Investigate how the world around you has changed since you've been alive; from the amount the sea has risen, and the tectonic plates have moved, to the number of earthquakes and volcanoes that have erupted. Grasp the impact we've had on the planet in your lifetime; from how much fuel and food we've used to the species we've discovered and endangered. And see how the BBC was there with you, capturing some of the most amazing wonders of the natural world. Explore, enjoy, and share with your friends either the whole page, or your favourite insights. This is your story, the story of your life on earth. BBC Earth's Your life on earth is based on the following sources. Lead photo credit: John Kellerman / Alamy.

Max Headroom: the definitive history of the 1980s digital icon The definitive oral history of 1980s digital icon Max Headroom By Bryan Bishop On Thursday, April 4th, 1985, a blast of dystopian satire hit the UK airwaves. Max Headroom: 20 Minutes into the Future was a snarky take on media and corporate greed, told through the eyes of investigative journalist Edison Carter (Matt Frewer) and his computer-generated alter-ego: an artificial intelligence named Max Headroom. Set in a near-future where global corporations control all media and citizens are hopelessly addicted to dozens of TV channels, the movie follows Carter — working for the mysterious Network 23 — as he discovers that network executives have created a form of subliminal advertising known as "blipverts" that can actually kill. 20 Minutes into the Future kicked off an extensive franchise, and Max became a singular '80s pop culture phenomenon that represented everything wonderful and horrible about the decade. Hello, World (1981-1984) George StoneCO-CREATOR / WRITERI worked for an ad agency.

What was it like to be a part of the MIT Blackjack Team? A View That Puts Window Seats to Shame At the joystick was Bob Webster, a droll and brilliant adventurer half-jokingly known as the “Bill Gates of Oklahoma”. A software developer and inventor, Webster created some of the Midwest’s tech infrastructure in the early 1980s. He's also a passionate pilot. In 2001, he and his brother Mike built this aeroplane from a $100,000 kit offered by Lockwood Aircraft. I first met Webster in 2008, on a group trek to Everest Base Camp. Over the years, we’d stayed in touch, and Webster had recently made me an irresistible offer. “And unlike with the TSA,” he wrote, referring to US Transportation Safety Administration procedures for passenger jets, “you won't have to take off your shoes to get into the plane, and can use your cell phone on takeoff.”

untitled 14 Underground Lairs Fit For a Mega-Villain 25 Things You Might Not Know About Futurama The World's 15 Most Amazing Waterfalls (PHOTOS) Nature's Roller Coasters Next Whether they fall thousands of feet off a mountaintop deep in the jungle, or plunge only a few dozen feet into a river at a nearby state park, waterfalls are among the most breathtaking sights in nature. Their size and power are awe-inspiring, especially when seen up close. Here are some of the most spectacular falls around the world, starting with one whose beauty landed it an appearance on TV's "The Amazing Race": Seljalandsfoss. Top flight discounts from Orbitz

Sexy female characters from Stargate - a list by barnabob89