Spices and Herbs as potential cures 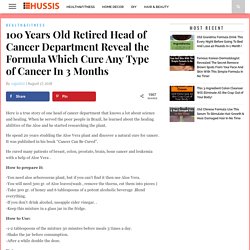 When he served the poor people in Brazil, he learned about the healing abilities of the Aloe and he started researching the plant. He spend 20 years studding the Aloe Vera plant and discover a natural cure for cancer. It was published in his book “Cancer Can Be Cured”. He cured many patients of breast, colon, prostate, brain, bone cancer and leukemia with a help of Aloe Vera .

How to prepare it: -You need aloe arborescens plant, but if you can’t find it then use Aloe Vera. How to Use: -1-2 tablespoons of the mixture 30 minutes before meals 3 times a day. Note: The mixture last 10-12 days so after consuming it you need to take a 10-day break and repeat the process. The treatment can be safely used during conventional cancer therapies. Medicines From Plants: Vinblastine, Vincristine, and L-dopa. Plants That Contain Medicinal Chemicals The Madagascar periwinkle is an attractive flowering plant that contains vinblastine and vincristine. 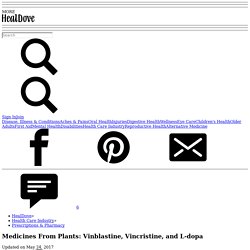 These chemicals are used as chemotherapy drugs. The pods of the velvet bean are covered by soft hairs, which gives the plant its name. The beans contain L-dopa, a helpful chemical in the treatment of Parkinson’s disease. The Madagascar periwinkle and the velvet bean are just two of the large number of plants that have been found to contain medicinal chemicals. Plants containing medicines are sometimes grown as crops.

The Madagascar Periwinkle. Synthetic Cannabis Extremely Dangerous Compared to Natural Marijuana, New Study Reveals. By Sayer Ji Contributing writer for Wake Up World The criminalization of cannabis has led to the creation of a synthetic cannabinoid analogue black-market that is far more dangerous than the cannabis plant, a new study reveals. 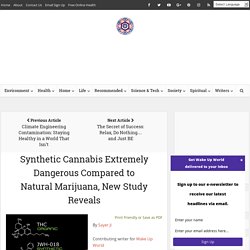 A revealing new study published in the journal Clinical Toxicology shows that people under the influence of synthetic cannabinoids (also known as “spice”) undergo far greater impairments than those using marijuana. Homemade dandelion (Taraxacum officinale) root powder builds up blood & immune system and has helped cure prostate, lung and other cancerous tumors (Supplements and Herbs [XXVI]) Supplements and Herbs (XXVI) From HOW THE LORD TOLD ME TO CURE CANCER by George Cairns, a now healed “terminal” prostate cancer patient, reprinted from original article published in The Northwest Herald, with updated instructions by the author Introduction and addenda by Healing Cancer Naturally, with Update January 2013 The following is a beautiful cancer healing testimonial as well as cancer cure “recipe” after my own heart and the most exciting healing story & advice I've read in a while: a virtually ubiquitous, free & simple remedy, shared freely without profit motive, apparently very effective for certain cancers, inspired by an invisible or higher spiritual source and best of all, its basic ingredient virtually found everywhere... 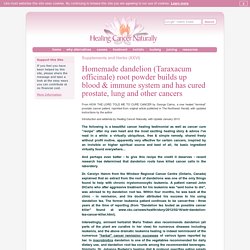 And perhaps even better - to give this recipe the credit it deserves - recent research has determined that dandelion roots have killed cancer cells in the laboratory. Dr. Berberine shown to stop cancer cell growth. (NaturalHealth365) The healing power of the plant-based antioxidant berberine has been known and used by just about every ancient healing system in the world. 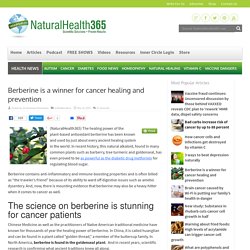 In recent history, this natural alkaloid, found in many common plants such as barberry, tree turmeric and goldenseal, has even proved to be as powerful as the diabetic drug metformin for regulating blood sugar. Chaparral: Antioxidant and DNA Protector. Chaparral Extract, 2 oz. 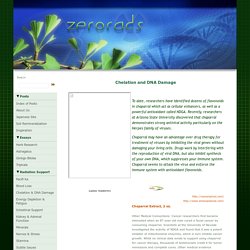 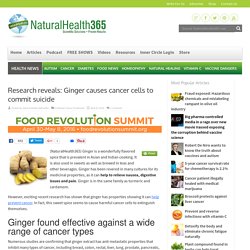 It is also used in sweets as well as brewed in teas and other beverages. Ginger has been revered in many cultures for its medicinal properties, as it can help to relieve nausea, digestive issues and pain. Ginger is in the same family as turmeric and cardamom. However, exciting recent research has shown that ginger has properties showing it can help prevent cancer. In fact, this sweet spice seems to cause harmful cancer cells to extinguish themselves. Numerous studies are confirming that ginger extract has anti-metastatic properties that inhibit many types of cancer, including breast, colon, rectal, liver, lung, prostate, pancreatic, and melanoma.

Frankincense and Cancer - What You Need to Know About This Essential Oil. As they made their iconic trek from the Far East to witness the invaluable gift of the newborn King, the three wise men from the biblical account of the birth of Jesus came bearing their own gifts. 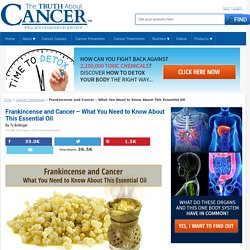 One of them, frankincense, possesses a value much more significant than just a fragrant incense. It demonstrates powerful anti-cancer effects that even in modern times legitimize this precious oil as being truly fit for a king. The oil of frankincense has been used for thousands of years to quell disease-causing inflammation, support heightened immunity, and prevent dangerous infections. But many people remain unaware of the added cancer-fighting potential of this precious serum, which researchers from the University of Leicester in the UK (among others), have confirmed through rigorous scientific testing. Cannabis Infused Coffee – Talk About A Wake-Up Call! Photo credit: bigstock.com If someone should bring up cannabis and coffee, you might think that they were referring to shops in the Netherlands. 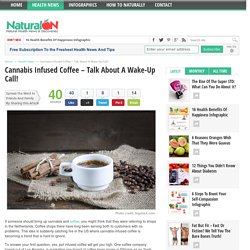 Coffee shops there have long been serving both to customers with no problems. This idea is suddenly catching fire in the US where cannabis-infused coffee is becoming a trend that is hard to ignore. To answer your first question, yes, pot infused coffee will get you high. One coffee company based out of Los Angeles, is marketing one brand of coffee bean grown in Ethiopia as an “herb conditioned” coffee bean. Another company, this one out of Washington state, is producing marijuana laced coffee at a plant that is across the Columbia River in the state of Oregon.

Fairwinds also infuses their beans with cannabis, but they use cannabis oil. The Recipe Everyone Is Using As An Alternative To Chemo. Photo credit: bigstock.com It’s been all over the news, the Internet, on radio and, of course, on Facebook and other social media sites: cannabis oil has been shown over and over to treat and cure cancer. 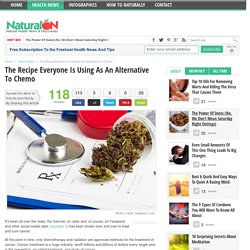 Pharmacological agents. ANTICANCER AGENTS are commonly referred to as antineoplastic agents, however, by strict definition, antineoplastic agents are used to treat a neoplasm’ (meaning a ‘new growth’). Neoplasms that have only the characteristic of localized growth are classified as benign. Neoplasms with the additional characteristic of invasiveness, and/or the capacity to metastasise, are classified as malignant. The term cancer’ is usually applied only to the latter group. Similarly, the word tumour (meaning literally ‘a local swelling’) tends to be used in association with cancer, and antineoplastic agent’ is commonly interchangeable with ‘anticancer’. Woman Shrinks Inoperable Mass and Heals Her Thyroid Disease With Cannabis Oil : Waking Times. Marco Torres, Prevent DiseaseWaking Times In 2011, Lindsay Bunn Rogers was diagnosed with hyperthyroidism and was immediately placed on medication to control her symptoms. She became more ill and eventually her entire thyroid was covered with palpable masses.

Despite her doctor’s position that “nothing natural” would ever heal her, Lindsay found not only relief but a dramatic healing potential in cannabis oil. This is her story. 25 Cancer Stem-Cell Killing Foods That Are Smarter Than Chemo and Radiation. Watch Turmeric Reprogram And Destroy Cancer Cells (Video) The cure for cancer is an elusive goal for researchers around the world. One of the greatest struggles with killing cancer isn’t exactly the killing part, but it’s not killing the rest of you.

Alternative medications like turmeric and hemp oil can be effective for some people, but it’s been difficult to apply those cures to all types of cancer. More on that: “In learning the molecular biology of cancer pathways, and in learning that what the evidence actually shows the effect of natural product extracts on various relevant molecular targets in various cancers, we see that there’s actually quite a large amount of evidence that supports using various molecules, natural products, and pharmaceuticals that are already approved and that have been around for a long time to affect anti-cancer activity along that pathway at that target.

Check out the video below. Source: Turmeric's 'Smart Kill' Properties Put Chemo & Radiation To Shame. By Sayer Ji Contributing Writer for Wake Up World The ancient Indian spice turmeric strikes again! A study finds turmeric extract selectively and safely killing cancer stem cells in a way that chemo and radiation can not. A groundbreaking study published in the journal Anticancer Research reveals that one of the world’s most extensively researched and promising natural compounds for cancer treatment: the primary polyphenol in the ancient spice turmeric known as curcumin, has the ability to selectively target cancer stem cells, which are at the root of cancer malignancy, while having little to no toxicity on normal stem cells, which are essential for tissue regeneration and longevity. Triphala, Ayurvedic formulation for treating and preventing cancer: a review.

Nature’s cancer antidote ‘Turkey Tail Mushroom’ and how giant Pharmaceutical and drug companies are exploiting the science of natural and herbal medicine. Amazing Herb Kills 98% Of Cancer Cells In Just 16 Hours In Lab Test. Over 100 Scientific Studies Agree: Cannabis Annihilates Cancer. Rene Caisse Tea - Home of Essiac tea, Sheep Sorrel Roots included! Essential Oils Pure 100% Therapeutic Grade : Budwig Center. Everything has an electrical frequency or vibration, including food, our bodies, and even disease that can be measured in Megahertz (MHz). Frequency is defined as a measurable rate of electrical flow that is constant between any two points. Interestingly enough, the frequency of essential oils are actually some of the highest frequencies known to man. AMAZING News! Scientists Report That Milk Thistle Has "Triple Action" Against Skin Cancer. 'Miracle Grass' Encourages Longevity While Dispelling Disease.

Tips and Advice on Making Homemade Oleander Extract. A Handful of Walnuts Each Day Can Help Keep Breast Cancer Away. 25th February 2015 By Carolanne Wright Contributing Writer for Wake Up World A powerful defense against breast cancer might just be found in the daily habit of eating walnuts. Researchers at Marshall University in Virginia have discovered that breast cancer risk dropped significantly in lab animals who ate a regular diet that included a modest amount of the nut. Lead researcher Elaine Hardman, Ph.D., compared the effects of a standard diet and a diet containing walnuts throughout the lifespan of mice. This Essential Oil Shows Signs of Killing Lung, Oral and Ovarian Cancer. Anti Cancer food , How to eat Apricot Seeds with Piter Caizer. Apricot Kernels Cancer Cure. Frankincense Superior to Chemotherapy in Killing Late-Stage Ovarian.

Like the Magi, carrying myrrh, frankincense, and gold, researchers from the University of Leicester have, for the first time, demonstrated the potential of treating ovarian cancer using the Christmas gift frankincense. The origins of frankincense can be traced to the Arabian Peninsula. According to Herodotus (5th century BC): Arabia is the only country which produces frankincense, myrrh, cassia, and cinnamon.. the trees bearing the frankincense are guarded by winged serpents of small size and various colors. (See this GreenMedInfo Summary) Frankincense, along with gold and myrrh, is one of the most famous Christmas presents in history, and is a fragrant plant resin extracted from the Boswellia sacra tree found across Africa and Arabia.