Show Chapter. The Vampire and His Huntress - Chapter 4 - thealeksdemon - Strange Magic (2015) Chapter Text Bleakley is stirring with something cruel. 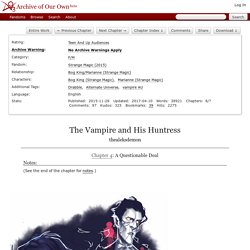 The man hears it in the wind, and in the hollow of his bones. Tentatively, he looks to the east, staring at the shimmering ocean which churns black as ink in the night. Show Chapter. Those Chains That Bind You: Kidnapping AU - Chapter 4 - abutterflyobsession - Strange Magic (2015) Chapter Text The final yellow and red shafts of the setting sun filtered into the throne room of the Dark Forest castle through the skylight as the queen mother paced up and down before the throne in distraught agitation. 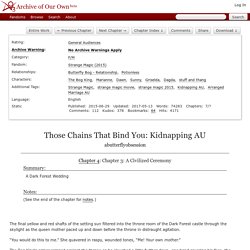 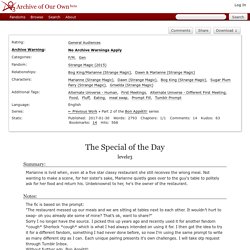 “Why not?” Marianne shot back, her look was livid, nearly stifling her sister’s resolve. “Do you really want to make a scene?” Dawn asked, looking around the crowded restaurant. Marianne followed her sister’s gaze, it was a really nice restaurant. La Forte Noire had a cozy, intimate interior, with soft yellow lighting that emitted from wall sconces and low hanging chandeliers. It was a busy spot and Marianne tried not to blame the wait staff for the mistake. Dawn's Christmas Wish - EndoratheWitch - Strange Magic (2015)

It was Christmas Eve. 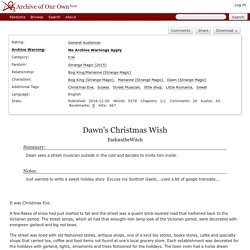 A few flakes of snow had just started to fall and the street was a quaint brick-layered road that harkened back to the Victorian period. The street lamps, which all had that wrought-iron lamp look of the Victorian period, were decorated with evergreen garland and big red bows. The street was lined with old fashioned stores, antique shops, one of a kind toy stores, books stores, cafes and specialty shops that carried tea, coffee and food items not found at one's local grocery store. Wolf on the Wings - LittleBat. HIDEOUS - EndoratheWitch. Restoration - EndoratheWitch. Acing It - Forever-Furuba. For the record, this is not in the same continuity as 'Chaste'. 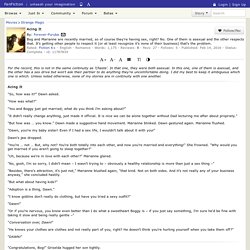 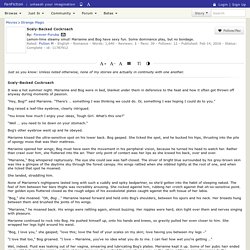 Scaly-Backed Cockroach It was a hot summer night. Marianne and Bog were in bed, blanket under them in deference to the heat and how it often got thrown off anyway during moments of passion. "Hey, Bog? " Lovely Monster - JustACloudAway. She knows she should be afraid of him. 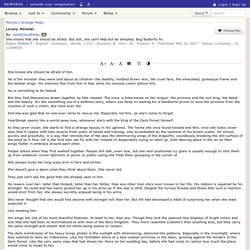 He is the monster they were told about as children- the deathly, mottled brown skin, the cruel face, the emaciated, grotesque frame and the bestial wings. His enemies flee from him in fear while his minions cower before him. He is something to be feared. But they find themselves drawn together by fate instead. Going Dark-er - Islenthatur. Title: Going Dark Pairing: Marianne/Bog Summary: A long time ago, there were darkness in the hearts of Fairies; they could be just as brutal and vicious as Goblins but only in defence to their loved ones. 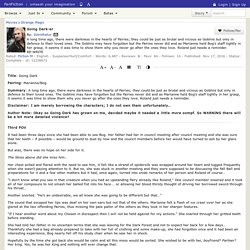 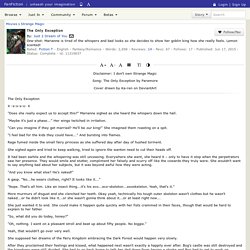 Into the ocean, End it all - Lynn_Nexus. She'd sailed through the air like she could fly. 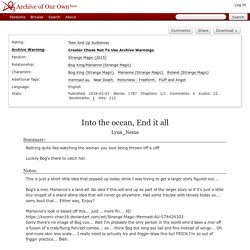 He watched in horror as she was plummeting from the cliff side above. Her long hair cut short, the pale dress she wore flapped around her like useless wings. He had to try, had to do something, had to. He had fins that were like sails, had a strong tail, he had to fly. But watching her fall and having to wait killed him, stabbed in at his gut and ripped up to his ribs, tearing through his soft underbelly. How They Might Have Met - moonlit_wings. Economic Differences - moonlit_wings. "You're joking," said the Bog King flatly, when Marianne showed him the shiny disks. "Your country bases its trade on metal tokens? " "It's easier than a barter system," Marianne insisted. "If you want something and don't have something the shopkeeper wants in exchange, you just give them coins and get what you want, and they can trade the coins for whatever they want later.

" "More efficient for the 'buyer', maybe, but it increases the overall number of transactions for the shopkeeper, making it less efficient for them. " "But this way they aren't dependant on waiting for a customer to bring in just the right thing, and can get it for themselves a lot faster. " "Assuming they don't mind carrying the dead weight around.

" "Coins are a reliable system. "A con artist could still trick someone into buying such a thing regardless of how they're paid. " "Going into your kingdom, something could be set up for goblins to exchange goods for coins at the border? Marianne groaned. "To do what? " "Oh. My Turn - MoraArtemis. An Awful Fix - RoseWaterWitch. The Bidding War - EndoratheWitch.

Come Down To Me - EndoratheWitch. The Vampire and His Huntress - Chapter 1 - thealeksdemon - Strange Magic (2015) Chapter Text He’s been visiting her once every turn of the moon. Sometimes he’s gracious, and he knocks on her front door. Other times, when his thirst drives him from courtesy, he looms at her window like a salivating hound. Of course she lets him in, what choice does she have? Their deal is as such: harm no one, and he shall have her willing blood whenever he thirsts. “But your sacrifice,” the immortal himself starts with a sly grin, “there is no other such delicacy that can compare to it.”

The vampire—named Bog, or so he says—claims that willing blood is the sweetest kind, but Marianne does not bother to ask him why that is so. At first, it stings, like a cruel pinch from an overly affectionate aunt. But it is not only the drinking that throws her. Sometimes Bog holds her fast and fierce, and sometimes he embraces her. Sometimes she does. Show Chapter. Space Oddity: Sci Fi AU - abutterflyobsession, Donotquestionme. Chapter Text “You will be killed.” Bog and the Terrible, Horrible, No Good, Very Bad Day - abutterflyobsession. Chapter Text “You're kidding me.” The silence in the kitchen had spanned seconds, creeping up to half a minute, before Marianne managed to scrape together enough words to form a sentence, barely paying attention to the arrangement of them, her attention still dominated by the unlikely object dangling in her open window.

A yellow strip of fly paper hung in a sticky spiral from the top of the window frame, sprinkled with the black remains of a few persistent fruit flies and mosquitoes that defied the cooling weather and continued to plague the area. Different: That's What I Like! - MagicalStranger13. Chapter Text It all began when Stuff and Thang came barreling into the throne room, shouting over each other about something urgent the mushrooms were saying. Stand by You - Pikuna. Chapter Text Bog wondered what this was all about. He stood on the left side of his father's throne, while his mother Griselda was on the right.

The Cedar King himself rose from his seat and gazed down to the royal Fairy couple. Love's Alchemy - EndoratheWitch. Stronger With You - blind-cupid (MandiLu), MandiLu. Chapter Text ‘You’ll be a stronger ruler with a king at your side.’ Her father had said. Marianne felt stronger alone. After Roland cheated on her, she wasn’t sure she’d ever trust anyone with her heart again. There may not be any of her heart left. Her father had been ‘encouraging’ her again to take Roland back or at least consider one of the other fairy men in their kingdom. If she was going to consider marriage, then she would consider it like a queen. She didn’t care to marry for love, maybe this would be a good opportunity to reach out to neighboring kingdoms.

“I have decided to marry.” “What? “I decided that if I have to marry then I will do so to strengthen our kingdom.” The Birthday Gift - MagicalStranger13. Shut Up and Dance - EndoratheWitch.