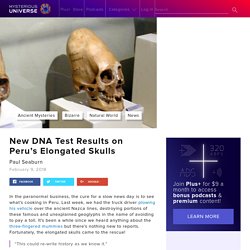 Last week, we had the truck driver plowing his vehicle over the ancient Nazca lines, destroying portions of these famous and unexplained geoglyphs in the name of avoiding to pay a toll. It’s been a while since we heard anything about the three-fingered mummies but there’s nothing new to reports. Fortunately, the elongated skulls came to the rescue! “This could re-write history as we know it.” Yes, it was another “This changes everything” moment over the weekend when the Elongated Skulls Symposium was held in Los Angeles. If those last two names sound familiar, it’s probably because they had a similar “this changes everything!” Homo erectus Skull Discovered in Central Java Provides More Evidence for Ancient Hominids in the Area. The skull of a Homo erectus has been found in the area near the Bojong River in Manyarejo village, Sragen, Central Java, Indonesia. 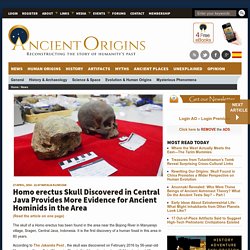 It is the first discovery of a human fossil in this area in 80 years. According to The Jakarata Post , the skull was discovered on February 2016 by 56-year-old Manyarejo villager Setu Wiryorejo. The skull is 14 centimeters long (5.51 inches) and 12 cm wide (4.72 inches), with a height of about 10 cm (3.94 inches). Its volume is approximately 800 cubic centimeters - smaller than the skull of Homo sapiens, which is usually around 1,400 cubic centimeters. It is a very special discovery, because most of the fossils discovered in this area are from plants and animals. The researchers from Sangiran Museum's paleoanthropology team, who examined the skull, believe that it is a very precious and rare artifact. Dr. As Sukronedi told The Jakarta Post : ''No progressive Homo erectus fossils have ever been found in Sangiran.

Rewriting Our Origins: Skull Found in China Promotes a Wider Perspective on Human Evolution. Most people discussing the origins of our species suggest that Homo sapiens can be traced back to Africa about 200,000 years ago. 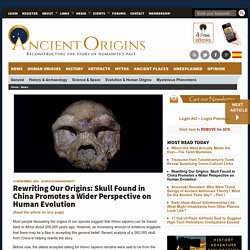 However, an increasing amount of evidence suggests that there may be a flaw in accepting this general belief. Recent analysis of a 260,000 skull from China is helping rewrite the story. Before now, the oldest accepted dating for Homo sapiens remains were said to be from the site of Omo Kibish in Ethiopia, dated to 195,000 years ago and Herto, also in Ethiopia, from 160,000 years ago. But new research is showing that things are more complicated. In fact, it seems that there was more mixing between diverse hominin populations than has been generally accepted and human ancestors were living in Eurasia as far back as 200,000 years ago. 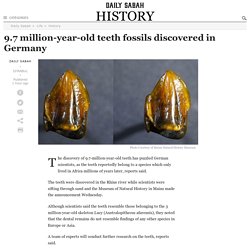 The teeth were discovered in the Rhine river while scientists were sifting through sand and the Museum of Natural History in Mainz made the announcement Wednesday. Although scientists said the teeth resemble those belonging to the 3 million-year-old skeleton Lucy (Australopithecus afarensis), they noted that the dental remains do not resemble findings of any other species in Europe or Asia.

A team of experts will conduct further research on the teeth, reports said. The Mayor of Mainz Michael Ebling suggested that the discovery would force scientists to reconsider the history of early mankind, DW reported. "I don't want to over-dramatize it, but I would hypothesize that we shall have to start rewriting the history of mankind after today," Ebling said.

Skhul and Qafzeh hominins - Wikipedia. The Skhul/Qafzeh hominins or Qafzeh–Skhul early modern humans[1] are hominin fossils discovered in the Qafzeh and Es Skhul Caves in Israel. 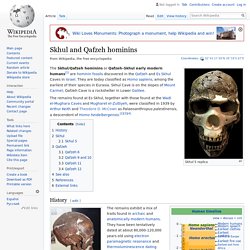 They are today classified as Homo sapiens, among the earliest of their species in Eurasia. Skhul Cave is on the slopes of Mount Carmel; Qafzeh Cave is a rockshelter in Lower Galilee. The remains found at Es Skhul, together with those found at the Wadi el-Mughara Caves and Mugharet el-Zuttiyeh, were classified in 1939 by Arthur Keith and Theodore D. McCown as Palaeoanthropus palestinensis, a descendent of Homo heidelbergensis.[2][3][4] History[edit]

Hypogeum of Ħal Saflieni – Malta’s Secret History – Miss Malta. The Hypogeum is an underground structure consisting of 3 levels that was stumbled upon in 1901. 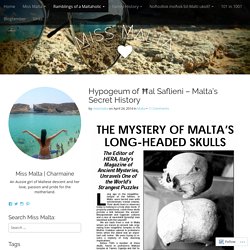 It dates back to 3000BC where 7000 skeletons were found. Out of those 7000 skeletons, only 6 skulls found were still intact. Four Species of Homo You’ve Never Heard Of, Part II. The Broken Hill Skull (replica shown) was originally designated Homo rhodesiensis. 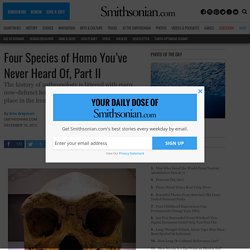 Today, it’s typically considered a member of the species Homo heidelbergensis. Image: Gerbil/Wikicommons. The Rhodope Skull: Skull Was it a True ALIEN ? DNA Analysis Of The Paracas Skulls Proves That We Are Not Alone. Mystery of the 'alien skulls' and Nazi briefcase found in remote mountain woods. The skulls were reportedly discovered by a team of explorers led by scientist Vladimir Melikov in a cave on Mount Bolshoi Tjach, Russia.

Despite being found two years ago, news of it has only gone global after a separate find in woods nearby of a Nazi briefcase and German full-colour map of the Adygea region made in 1941. According to reports the briefcase, picked up by a local hermit, had the emblem of the Ahnenerbe - the most secretive Nazi institute founded by Heinrich Himmler in 1935 to find evidence that the Aryan race had once ruled the entire globe. But it soon branched into occultism, paranormal research, pseudoscience and the study of UFOs and weapons development due to Himmler’s obsession with such topics. The strange appearance of the skulls has led to speculation the Nazis could have made contact with aliens or even summoned demons in the remote area and these were the remains.

Mr Melikov was reported as saying the creature was "unlike anything known to man". In Photos: Amazing Human Ancestor Fossils from Dmanisi. DNA Analysis Of Paracas Elongated Skulls Released. The Results Prove They Were Not Human. February 6, 2014. 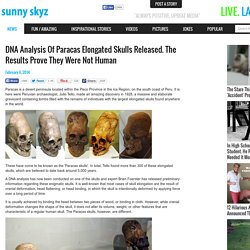 The Mystery of the Crystal Skulls. By Chris Morton & Ceri Louise Thomas— An old native American legend describes the existence of thirteen ancient crystal skulls, the size of human skulls, with moveable jaws that were said to speak or sing. 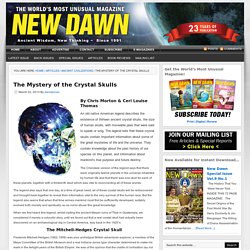 The legend tells that these crystal skulls contain important information about some of the great mysteries of life and the universe. They contain knowledge about the past history of our species on this planet, and information about mankind’s true purpose and future destiny. The Hypogeum of Hal Saflieni and an unknown race with elongated skulls. Many ancient megalithic structures exist in Malta and one of them is the ‘Hypogeum of Hal Saflieni’, a subterranean structure with magnificent properties that is more than 5,000 years old. 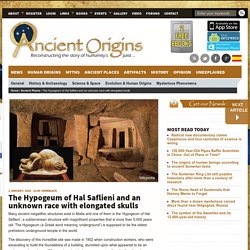 The Hypogeum (a Greek word meaning ‘underground’) is supposed to be the oldest prehistoric underground temple in the world. The discovery of this incredible site was made in 1902 when construction workers, who were excavating to build the foundations of a building, stumbled upon what appeared to be an underground sanctuary. When archaeologists began uncovering the site, they found a massive underground structure consisting of three levels carved into stone. It has been estimated that more than 2,000 tonnes of stone would have needed to be removed for its construction. Smithsonian Admits to Destruction of Thousands of Giant Human Skeletons in Early 1900′s.

Elongated Skulls in utero: A Farewell to the Artificial Cranial Deformation Paradigm? The Story Of Elongated Skulls And The Denied History Of Ancient People: An Interview With Mark Laplume. Mark Laplume is an artist and independent researcher who has been engaged in making reconstruction drawings of ancient people with elongated skulls. I have already had the pleasure of showcasing his remarkable work in a gallery on fetuses and children with elongated heads, and in a post on the visualization of ancient populations. Mark’s reconstructions were also illustrated in an article on suppressed evidence challenging the Artificial Cranial Deformation paradigm as the only way of explaining elongated skulls. Mark now shares some of his insights into the mystery of elongated skulls with the readers of Ancient Origins. IG: Mark, how did you become interested in elongated skulls and why did you decide to start reconstructing the appearance of these people?

In 2006, when I first downloaded Google Earth, I looked around at places I knew and then made a bee line to the south end of Lake Titicaca. Initial DNA analysis of Paracas elongated skull released – with incredible results. Prehistoric teeth found in China may point to mysterious new human species. The more research that is done into the prehistoric origins of humans, the more crowded it gets. According to a new study, there may well have been multiple species of primitive humans between 60,000 and 120,000 years ago – including a mysterious people who do not fall under the categories of either Neanderthals, Denisovans, or modern humans.