SchoolBannedDialect. Radio 4 Word 4 Word - You Don't Want to Speak Like That! BBC Radio 4 - Word of Mouth, Accents Will Happen. Is it wrong for a person to change their accent? Quentin Letts, columnist and sketch writer at the Daily Mail Good on David Beckham for poshing up his accent. 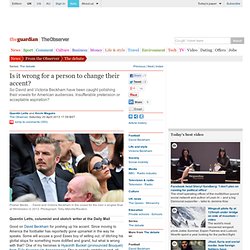 Since moving to America the footballer has reportedly gone upmarket in the way he speaks. Some will accuse a good Essex boy of selling out, of ditching his glottal stops for something more dollified and grand, but what is wrong with that? One of my heroines is Hyacinth Bucket (pronounced Bouquet) from TV's Keeping Up Appearances. She is socially ambitious and, all right, laughably snobbish, but one woman's snobbery is another's aspiration.

If accents no longer matter, why the sudden rush for elocution lessons? Speaking this week at what sounds like a bastion of received pronunciation – the Yvonne Arnaud Theatre in Guildford, Surrey – Joan Bakewell confided that "someone at the BBC" had said her voice is "too posh" for the channel. 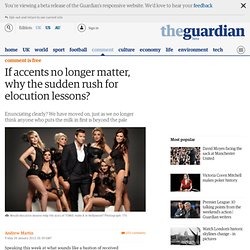 It is not clear what the consequences will be for Bakewell, but I hope I will still hear her fascinatingly overenunciated tones on the radio. As she speaks, I visualise the strenuous contortions of her mouth, recalled from her TV appearances. It is like Not I, that film of a Beckett play featuring a female speaking mouth. It is touching that anyone should go to such lengths to be understood, and I always think she must have tired lips after those interviews in which she, an atheist, politely – but slightly exasperatedly – tries to discover why perfectly intelligent-seeming people can be so silly as to believe in God. Yet the newspapers were also full this week of stories about the return of elocution classes. Why I wish I'd kept my Welsh accent.

According to Alexander Baratta, an English lecturer at Manchester University's school of education, "accentism" – the pressure on people with regional accents to switch to something closer to received pronunciation – is the last taboo. 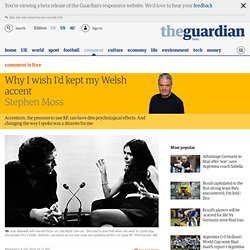 He likens it to racism, arguing that "people make snap judgments based on accents", and that in an effort to fit in, many of us modify the way we speak, with potentially dire psychological consequences. I know the feeling. I come from south-east Wales – the east is significant. I went to a large comprehensive, and if you had heard me speak at the age of 18 you would have said I had a Welsh accent, though nothing like as strong as those further west or in the Valleys. 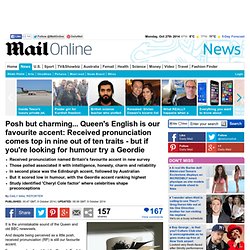 Speaking out for regional accents. By BBC News Online's Liz Doig The man in charge of pronunciation for the Oxford English Dictionary is a Brummie. 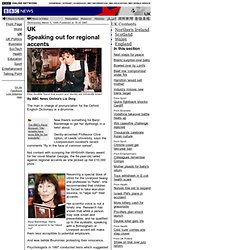 Now there's something for Beryl Bainbridge to get her dipthongs in a twist about. BBC Breakfast's Stephanie McGovern: I was seen as too common for telly. She has explained the global economic crisis to an audience of millions, but BBC Breakfast's business presenter Stephanie McGovern has said that colleagues treated her as "too common for telly" because of her Teesside accent. 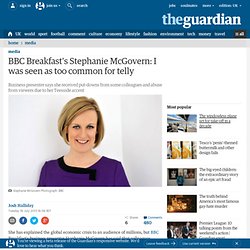 McGovern complained that she regularly received abuse from viewers about her accent and that one BBC manager told her: "I didn't realise people like you were clever. " Writing in the Radio Times, McGovern said: "Despite being a business journalist at the BBC for 10 years, working behind the scenes on our high-profile news programmes, I was viewed by some in the organisation to be 'too common for telly'.

" 'Brummie' is the least attractive accent. The Birmingham accent is considered the least attractive accent in the British Isles – and Southern Irish the most appealing A quick analysis of English dialects shows that there are roughly as many in the British Isles as there are in the whole of North America – including Canada, Bermuda and Native American dialects. 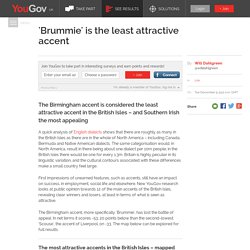 The same categorisation would, in North America, result in there being about one dialect per 10m people; in the British Isles there would be one for every 1.3m. Britain is highly peculiar in its linguistic variation, and the cultural contours associated with these differences make a small country feel large. Does your accent really hinder your job prospects? Bristolians auditioning for roles in the new Star Wars film were warned to "disguise their accents" by David Prowse, who played Darth Vader in the original movies. 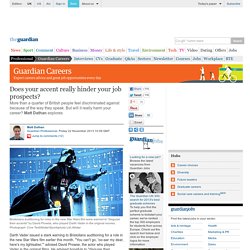 Photograph: Cine Text/Allstar/Sportsphoto Ltd. /Allstar Darth Vader issued a stark warning to Bristolians auditioning for a role in the new Star Wars film earlier this month. Teachers feel pressure to 'standardise' their accents in class. Teachers feel under pressure to change their accents to be understood in the classroom, according to a study carried out at The University of Manchester. 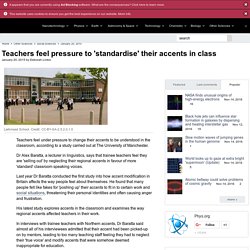 Dr Alex Baratta, a lecturer in linguistics, says that trainee teachers feel they are 'selling out' by neglecting their regional accents in favour of more 'standard' classroom speaking voices. Last year Dr Baratta conducted the first study into how accent modification in Britain affects the way people feel about themselves. He found that many people felt like fakes for 'poshing up' their accents to fit in to certain work and social situations, threatening their personal identities and often causing anger and frustration.

ShutYerFace AccentsInAcademia. Do accents matter in modern Britain? Once, so long ago that it could have been in another life, I was required to take a voice test by the BBC. 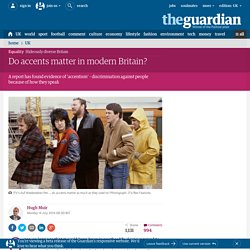 I had been previously recorded reading the Autocue and, confounded perhaps by barely submerged cadences from the East End, someone found cause to worry. So off I went to the chief voice trainer – a man whose honey-coated, phonetically immaculate delivery made him a legend inside the corporation and beyond. He listened as I read a script that he had rattled off that morning on the Today programme. I just about passed muster. "Your voice is not my voice," he said kindly. When an Accent Gets in the Way of a Job - At Work. Why speaking proper still counts as having an accent. “Accent”, the journalist AA Gill writes in The Angry Island: Hunting the English, “is the last redoubt of prejudice”. Depending on where you hail from, it’s a statement that will have varying degrees of truth. I know Londoners of a certain background who are unconvinced by the idea that how you sound can be a barrier to success. But I also know many people – myself included – who have two different accents: the one we grew up with and the one we use for “official business”.

Like the gamekeeper Mellors from Lady Chatterley’s Lover, we find ourselves explaining the split to bemused friends after overheard phone calls home or a misplaced word (“tea” rather than “dinner” is my main culprit). Do regional dialects have any place in the modern world? - Home News - UK - The Independent. It got him talking about the language of his youth. In his early teens in 1960s Penrith, a market town just outside the Lake District National Park, Dad explained he and his friends had a phrase they'd use to describe women who were, what they called in those days, well-endowed: "weel top niukled". He and a Cornish mining pal used to joke that if they ever owned a mine they would call it that: "Weel," he said, meant "well"; "top" took its usual meaning, but "niukled", the key word, he couldn't remember.