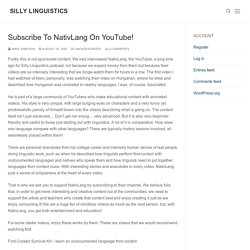 We had interviewed NativLang, the YouTuber, a long time ago for Silly Linguistics podcast, not because we expect money from them but because their videos are so intensely interesting that we binge-watch them for hours in a row. The first video I had watched of them, personally, was watching their video on Hungarian, where he drew and described how Hungarian was unrelated to nearby languages. I was, of course, fascinated. He is part of a large community of YouTubers who make educational content with animated videos.

His style is very unique, with large bulging eyes on characters and a very funny yet photorealistic parody of himself drawn into the videos describing what is going on. That is why we ask you to support NativLang by subscribing to their channel. For some starter videos, enjoy these works by them. First Contact Survival Kit – learn an undocumented language from scratch What Latin Sounded Like And How We Know Hungarian Explained. Silly Linguistics: A look at the fun side of language. Steve the vagabond and silly linguist. How to read an academic paper. - Academia Obscura. This is the most accurate diagram of... - Etymology Memes for Reconstructed Phonemes.

"Teddy Bear," the porcupine, doesn't like to share... Irish and swear words. One question I am sometimes asked as a native Irish speaker is why Irish has no swear words or slang associated with it. 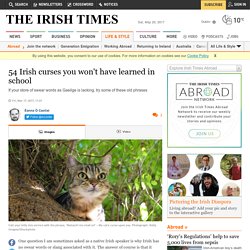 The answer of course is that it does, but such words and sayings are rarely, if ever, taught in our schools. Rightly or wrongly, the degree to which we are able to curse and swear with any degree fluency will never be measured in an exam. And perhaps we are the worse for it. I can’t think of many better ways of learning a language than by celebrating its aesthetic characteristics. Of course in most cases, the swear words, curses and slang many of us encountered in our formative years first reached our ears outside the classroom. I remember as a child returning to school after our summer holidays in the west of Ireland armed with an arsenal of words such as crabadán, bobarún and búbaire and, to the amusement of the teachers, phrases such as buinneach shíor ort and a dhiabhal de phogaí among others.

Irish-speaking peasants Loscadh is dó ort Droch chrích ort Mallacht Dé ort. Ancient Egyptian Stories Will Be Published in English for the First Time. While people may view inscriptions in Greek or Latin as pretty, they still recognize their merit as text. 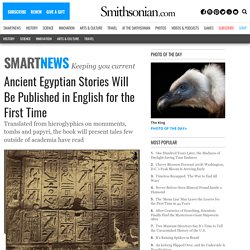 Indeed, writings from ancient Greece and Rome are revered and considered classics of Western literature. Egyptian hieroglyphics, however, are often seen as mere decoration. Sometimes, the characters are literally used as wallpaper. One reason is that schoolchildren and classicists alike have read Greek and Latin widely for centuries. But hieroglyphics and the stories they tell have remained accessible only to a handful of trained scholars. Egyptologist Toby Wilkinson, a fellow of Clare College at Cambridge University, tells Dalya Alberge at The Guardian that the ancient Egyptian writing is just as compelling and layered as those written by the Romans. The selections include stories like “The Tale of the Shipwrecked Sailor,” the text from the Tempest Stela and letters written around 1930 BC by a farmer named Heqanakht. The Secret History of “Eeny Meeny Miny Mo” How English sounds to non-English speakers. 33 Eye-Wateringly Funny Dutch Phrases and Idioms [Infographic] 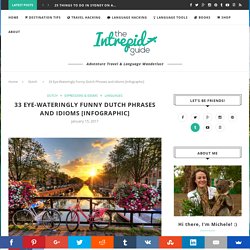 They say roughly 30% of our everyday speech is made up of expressions. Well, the Dutch probably use closer to 90%! Here are 33 eye-wateringly funny Dutch phrases and idioms to get you started. There are 16.99 million Dutchies across the globe and a further 28 millions of Dutch descent. Despite the longest word in the Dutch dictionary ‘Meervroudigepersoonlijkheidsstoornissen‘ (meaning ‘multiple personality disorder’) weighing in at 38 letters, they don’t speak ‘double Dutch’. Apparently, Dutch is one of the easiest languages to grasp if you’re an English speaker and even easier if you speak German, but you might need some ‘dutch courage’ to attempt pronouncing all their guttural-sounding ‘g’s.