Sextech startups boom in coronavirus pandemic. A quarter of the world is now in coronavirus lockdown, with many people facing more ‘alone time’ than ever. 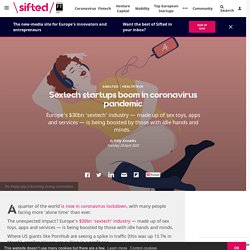 Keep your knickers on. Study finds COVID-19 could be transmitted sexually. Men who have recovered from the coronavirus should abstain from sex to avoid passing on the disease to partners, a study suggests.

Patients in China were found to have evidence of COVID-19 in their semen several days after they stopped displaying symptoms of the disease. Scientists are now concerned that the deadly disease could be sexually transmitted. It raises the prospect of health chiefs advising people to avoid having sex for a set period after they have recovered from the disease. One of the patients in the study at Shangqui Municipal Hospital in Henan province tested positive for COVID-19 in his semen 16 days after coming down with the disease and three days after clinical recovery. “Abstinence or condom-use might be considered as preventative means for these patients,” the study, published in the Journal of the American Medical Association, concluded. Contradicting old research. Young People Are Having Less Sex.

These should be boom times for sex. 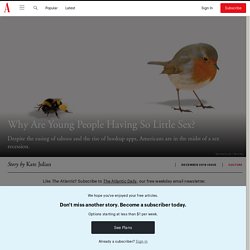 The share of Americans who say sex between unmarried adults is “not wrong at all” is at an all-time high. New cases of HIV are at an all-time low. Most women can—at last—get birth control for free, and the morning-after pill without a prescription. If hookups are your thing, Grindr and Tinder offer the prospect of casual sex within the hour. The phrase If something exists, there is porn of it used to be a clever internet meme; now it’s a truism. To hear more feature stories, see our full list or get the Audm iPhone app. Polyamory is a household word. But despite all this, American teenagers and young adults are having less sex. To the relief of many parents, educators, and clergy members who care about the health and well-being of young people, teens are launching their sex lives later.

Meanwhile, the U.S. teen pregnancy rate has plummeted to a third of its modern high. Over the past few years, Jean M. The Single Age. Micro-condos and ice-cream pints: How businesses cater to Canada’s singles market. The traditional idea of marrying your high school sweetheart and having enough kids to form a sports team is changing. 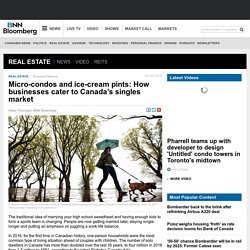 People are now getting married later, staying single longer and putting an emphasis on juggling a work-life balance. In 2016, for the first time in Canadian history, one-person households were the most common type of living situation ahead of couples with children. The number of solo dwellers in Canada has more than doubled over the last 35 years, to four million in 2016 from 1.7 million in 1981, according to the latest Statistics Canada data. Businesses are shifting their approach to this growing generation of singles as they become one of the largest cohorts in Canada. Here’s a look at how some of them are going about it. Vermont-based ice cream chain Ben & Jerry’s – which sells its products in Canada – has been looking for ways to cater to singles who are balancing a busy work schedule and trying to find time to eat. "Bigger sizes are often called family sizes.