Global Shapers Survey 2017. Www.forbes. Subscription Center. 15 ASPECTS THAT HIGHLIGHT HOW GENERATION Z IS DIFFERENT FROM MILLENNIALS. How will Generation Z disrupt the workplace? Over the past few years, the millennial workforce conversation has taken center stage in the media. 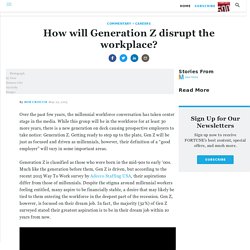 Millennials’ Plan: The Generation’s Top 10 Personal Goals. GENERATION X  GOES  GLOBAL - Generation X Goes Global. Understanding Y: Global Millennials – UYD Media. As many of UYD readers know, there is no lack of information (or stereotypes) on millennials and their impact in the work place or our communities. 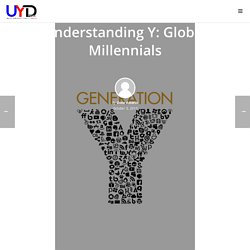 Many of the top global consulting firms have conducted robust, worldwide studies on this generation. Millennials: Impact of their Behaviour on Global Consumer Markets. Why buy this report? 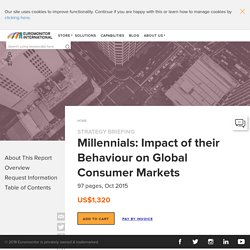 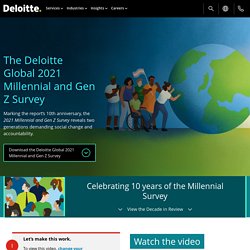 An emerging middle class. In 2009 the middle class included 1.8 billion people, with Europe (664 million), Asia (525 million) North America (338 million) accounting for the highest number of people belonging to this group. 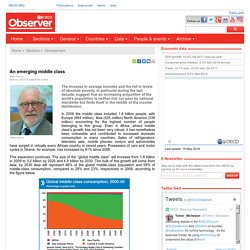 Even in Africa, where middle class’s growth has not been very robust, it has nonetheless been noticeable and contributed to increased domestic consumption in many countries. Sales of refrigerators, television sets, mobile phones, motors and automobiles have surged in virtually every African country in recent years. Possession of cars and motor cycles in Ghana, for example, has increased by 81% since 2006. This expansion continues. The size of the “global middle class” will increase from 1.8 billion in 2009 to 3.2 billion by 2020 and 4.9 billion by 2030. The developing world’s “emerging middle class” is a critical economic and social actor because of its potential as an engine of growth, particularly in the largest developing countries such as China and India but also in sub-Saharan Africa. Remarkable Declines in Global Poverty, But Major Challenges Remain. WASHINGTON, April 17, 2013—The number of people living on less than $1.25 per day has decreased dramatically in the past three decades, from half the citizens in the developing world in 1981 to 21 percent in 2010, despite a 59 percent increase in the developing world population. 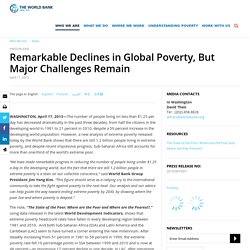 Majority of vapers have quit tobacco – survey. More than half of the estimated 2.9 million people in the UK who use e-cigarettes have given up smoking tobacco, a survey suggests. 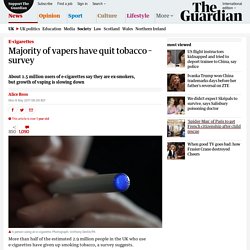 But many people overestimate the relative health risks of vaping, which may have contributed to a slowdown in the numbers turning to e-cigarettes. Nine million people in the UK still smoke tobacco. More than a quarter of young adults in the UK do not drink alcohol – in data. Young adults in the UK are more likely to be teetotallers than their older counterparts, according to figures released this week. 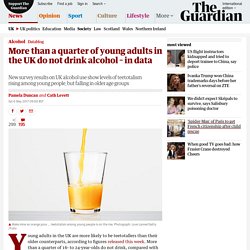 More than a quarter of 16- to 24-year-olds do not drink, compared with just over a fifth of the broader adult population. Newsbeat Documentaries - We Are Generation Z. A Generational Imperative: Democracy, Technology & a new Social Contract. Contributed by Adam Jacoby, Founder of MiVote The western world is enraptured by its own inventiveness. 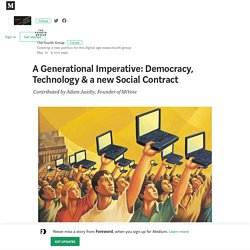 Everywhere you turn, people are talking about blockchain, cryptocurrency, and the digital revolution. The assumption is that these tech advancements must change the world for the better. After all, this is a revolution that promises to decentralise life as we know it and disintermediate the existing power structures like government, capital, and information. That’s got to be good, right? Times tables, wiring a plug and sewing buttons: How Millennials can't do life hacks like the baby boomers. They are a dab hand at all things online - but Millennials are ­outshone by older Brits when it comes to ­“traditional” life skills.

For a study has revealed over-55s can beat them at all sorts of simple tasks , from basic mental arithmetic, to ironing, sewing and first aid. Eight in 10 over-55s can do their times tables in their heads compared with just four in 10 25 to 34-year-olds. Health insurer Bupa found odd jobs taken for granted by over-55s such as rewiring a plug baffle most Millennials. The pre-internet generation are also twice as likely to spell correctly as they were not brought up on spell-checkers. They are also trump their kids at writing formal letters, removing stains, map reading and identifying birds, plants and flowers. But 87% of Millennials wished they had more practical skills, without having to turn to the internet for help. Generation X — not millennials — is changing the nature of work. Generation X — not millennials — is changing the nature of work. How Millennials today compare with their grandparents 50 years ago.

The past five decades – spanning from the time when the Silent Generation (today, in their 70s and 80s) was entering adulthood to the adulthood of today’s Millennials – have seen large shifts in U.S. society and culture. It has been a period during which Americans, especially Millennials, have become more detached from major institutions such as political parties, religion, the military and marriage. At the same time, the racial and ethnic make-up of the country has changed, college attainment has spiked and women have greatly increased their participation in the nation’s workforce.

Our new interactive graphic compares the generations today and in the years that each generation was young (ages 21 to 36) to demonstrate the sea change in young adults’ activities and experiences that has occurred over the past 50 years. As Millennials Demand More Meaning, Older Brands Are Not Aging Well. Serving an older population is a great thing, so long as that’s what a company intends to do–like AARP serving those 55 and older. But some major mass-market brands mean much less to younger generations than to older generations–creating significant risk for the longevity of those companies.