How do you reduce the suicide rate? Increase the minimum wage, researchers say. Buzzfeednews. “I tried to register for the 2016 election, but it was beyond the deadline by the time I tried to do it,” a man named Tim, age 27, explained to New York magazine last fall. 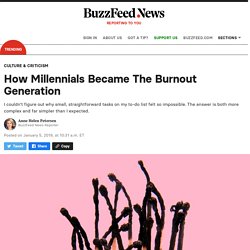 Vice. When she started her podcast, Bad With Money, in 2016, Gaby Dunn went to a coffee shop and asked patrons what their favourite sex positions were. 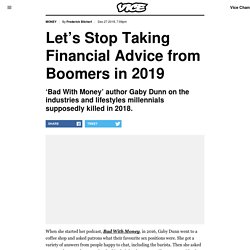 She got a variety of answers from people happy to chat, including the barista. Then she asked everyone how much money they had in their bank accounts. The Economy Killed Millennials, Not Vice Versa. Millennials aren’t doing in the economy. 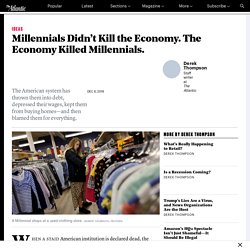 It’s the economy that’s doing in Millennials. My history with the accused goes back several years. In 2012, I published a column in The Atlantic with Jordan Weissmann, now a writer at Slate, called “The Cheapest Generation.” That headline—which got us in trouble because it was the only thing most people read—was a bit of a misdirection. The deeper question of the piece was whether the Great Recession might permanently reduce young people’s taste for houses and cars—two of the most vital engines of the economy.

For years, various outlets, including The Washington Post and the Pew Research Center, continued reporting that young people were buying fewer cars and houses than those in previous generations at a similar point in their life. But the fact that young people are buying fewer houses and cars doesn’t prove that they want fewer houses and cars. Read: How Friendsgiving took over Millennial culture. Millennials Aren't 'Killing' Industries, We're Just Broke, Study Finds. Just some stock image millennials trying to make ends meet. 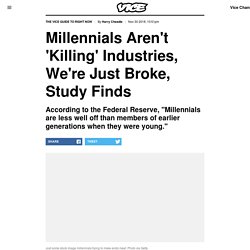 Photo via Getty For years, the personal habits of millennials have been pored over as if the generation now between 21 and 35 years old had descended from outer space. Millennials have been accused of "killing" everything from malls to threesomes to golf to home ownership. Along the way, various theories about young adults have been floated—maybe they're spending too much on avocado toast to buy homes, maybe they aren't going to casinos because they can play games on their phones. But a new study from the Federal Reserve suggests a simple reason behind a lot of millennial consumption habits: We don't have as much money as previous generations. The study also noted newer financial obstacles for millennials. This isn't exactly news to millennials. How the baby boomers — not millennials — screwed America. Everyone likes to bash millennials. 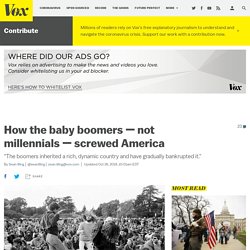 We’re spoiled, entitled, and hopelessly glued to our smartphones. Millennials aren’t coddled—they just reject abuse as a management tactic. Recently, the University of British Columbia’s faculty of medicine circulated a video meant to make its instructors aware of “student mistreatment.” 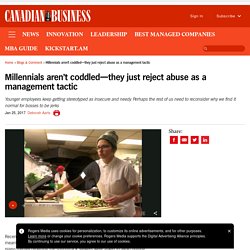 Mass Human Labor is No Longer Needed. Where Do We Go From Here? In Brief Past economic frontiers can no longer sustain the masses, and there is absolutely nothing that our present-day political and business leaders can do to 'tweak' the system back to sustainable growth. 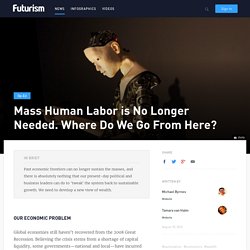 We need to develop a new view of wealth. Our Economic Problem Global economies still haven’t recovered from the 2008 Great Recession. Believing the crisis stems from a shortage of capital liquidity, some governments—national and local—have incurred unprecedented levels of public debt in an effort to stimulate economic activity via government spending programs. No matter the antithetical and increasingly extreme policies enacted, however, economic growth remains stagnant. Our book, Wealth Beyond Nations: Economic & Moral Principles of Global Interdependence, begins by asking the fundamental question: with all the multifarious and often contradictory ‘solutions’ being thrown at the problem, have we perhaps not accurately defined the root cause of the global economic malaise?

Is the Gig Economy Working? Not long ago, I moved apartments, and beneath the weight of work and lethargy a number of small, nagging tasks remained undone. 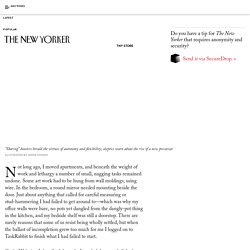 Stereotypes hurting millennials’ chances of finding work in the public service, says report. Harmful stereotypes about millennials may be contributing to their struggles to find work in the federal government, according to a new report outlining the urgent need for Canada’s public service to recruit and nurture bright young talent. 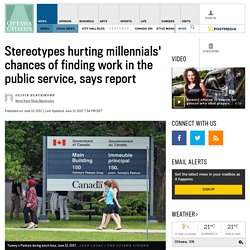 Perceptions of millennials as narcissistic, impatient and disloyal may be factors causing difficulties in getting hired for public service jobs, says a report by Deloitte titled Changing the conversation: Millennials in the federal government. These perceptions are largely misunderstandings of some of the challenges millennials face, the report says. Millennials now make up the majority of working-age Canadians. In 2016, Treasury Board President Scott Brison said the next “golden age” of Canada’s public service would be led by millennials — meaning the federal workplace needed to transform to attract highly valued workers under age 35.

The “millennial problem” 21 Reasons Millennials Are A Complete Disgrace To The World. It Took Me 30 Years and 4 Tries to Get My Driver's License. I didn’t think to get my driver’s license until my mid-twenties. 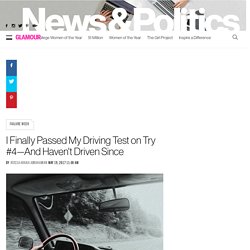 I grew up in Geneva, Switzerland, where the legal driving age was 18, and moved to New York as soon as I could. I suppose I could have at least taken lessons, but driving seemed like a risky chore; it was also pretty pointless, since driving just wasn’t necessary for Geneva life. I didn’t realize this wasn’t normal until I went to college and made friends with kids from California, Arizona, and New Jersey—kids whose adolescence seemed to revolve around driving. Millennials can’t buy homes because they’re wasting money on avocado toast, helpful millionaire says. They may have graduated during the Great Recession with poor job prospects and outrageous student loans, but that doesn’t matter. There’s one explanation for why millennials have been slow to buy homes: avocado toast.

‘Everything I hate about you … is because of me?’ How Baby Boomers created their own Millennial Monsters. Meet The Millennials - Environics Research. Millennials in the Critical Counterculture segment are the engaged, critical young people of the kind sometimes featured in news stories about 20-somethings building businesses, pursuing groundbreaking online activism, and otherwise shaking up the world. These Canadians share many of the same progressive values as their comrades, the Engaged Idealists: they believe in gender equality, are at ease with diversity of all kinds, and reject discrimination and injustice. Millennials In Ontario Filing For Insolvency At Higher Rates: Report.

Many Canadian millennials struggle under a load of debt, and apparently more and more of them are looking for relief from creditors. One Ontario firm that provides bankruptcy and consumer proposal services says in its biennial "Joe Debtor" report that 18 to 29 year olds comprised one in seven of their insolvent clients between the start of 2015 and the end of 2016. Hoyes, Michalos & Associates says that’s up two percentage points from previous reports, in which 12 per cent were "young millennials. " The company notes that per-capita consumer insolvency rates are at a 15-year low in Ontario, but those who file for bankruptcy or consumer proposals are already struggling financially before their debt is factored in.

The Gaslighting of the Millennial Generation – Born Again Minimalist. Exponential growth devours and corrupts – Signal v. Noise. There is no higher God in Silicon Valley than growth. 'The millennial side hustle,' not stable job, is the new reality for university grads. No sex please: Inside the millennials' virgin resurgence.