Facts, Information, Summary. Biography of El Cid, Medieval Spanish Hero. El Cid (1045–July 10, 1099), whose birth name was Rodrigo Díaz de Vivar (or Bibar), is a Spanish national hero, a mercenary soldier who fought for the Spanish king Alfonso VII to liberate parts of Spain from the Almoravid dynasty and eventually captured the Muslim caliphate of Valencia and ruled his own kingdom. 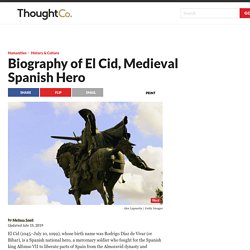 Fast Facts: El Cid Known For: National hero of Spain, mercenary soldier against Christian and Muslims, ruler of ValenciaBirth Name: Rodrigo Díaz de Vivar (or Bibar)Born: c. 1045 near Burgos, SpainParents: Diego Lainez and a daughter of Rodrigo AlvarezDied: July 10, 1099 in Valencia, SpainEducation: Trained in the Castilian court of Sancho IISpouse: Jimena (m. July 1074)Children: Cristina, Maria, and Diego Rodriguez Rodrigo Díaz de Vivar was born into a chaotic period in Spanish history when much of the southern two-thirds of the Iberian peninsula had been conquered by Islamic forces during the Arab conquest beginning in the 8th century CE. Early Life Military Career El Cid's Legends. Medieval People & Events. Medieval Clothing and Fabrics in the Middle Ages. In medieval times, as today, both fashion and necessity dictated what people wore. 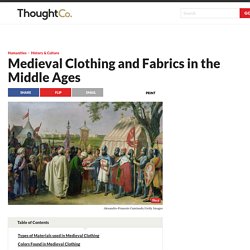 And both fashion and necessity, in addition to cultural tradition and available materials, varied across the centuries of the Middle Ages and across the countries of Europe. After all, no one would expect the clothes of an eighth-century Viking to bear any resemblance to those of a 15th-century Venetian. So when you ask the question "What did a man (or woman) wear in the Middle Ages?

" be prepared to answer some questions yourself. Where did he live? Dress, Jewels, Arms and Coat of Arms: Medieval Culture and Self-Representation in the Late Middle Ages. The serious gentlemen on the image above are - no doubt - feasting. 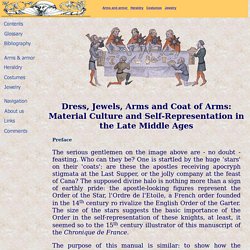 Who can they be? Jewel1. Fuentes de energía y materiales. Energy Resources: Wind power. Science based - I was thrown into the middle ages, how do I power my time machine? - Worldbuilding Stack Exchange. If you were REALLY smart you'd have brought a jump-starter with a built in battery and just jumped the car with that. 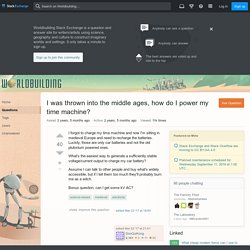 Put it right next to the Chilton's Guide, textbooks, spare gasoline and fluids, spark plugs, fuses, and all the other spare parts you also thought to bring with you before time traveling (or just have in your trunk because you're Ash Williams). If you're smart, your time traveling car is a manual transmission. It's easier to repair and can be push started. A modest 5 to 10 mph is all that's required, rolling down a shallow hill or getting a few folks from the local inn to push. This provides enough mechanical energy to turn the alternator and generate electricity for the spark plugs to start the gasoline engine. (If you're smart you'd also use a diesel set up to run bio-diesel. Push starting an automatic is much harder and might be possible around 30-40 mph, but I wouldn't risk irreparable damage to the transmission. Instead, you'll have to turn the alternator manually. Medieval smokestacks: fossil fuels in pre-industrial times. 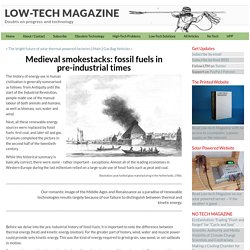 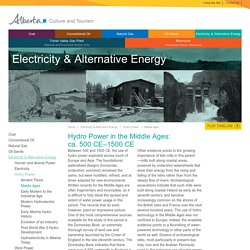 Clovis phase spear points represent the oldest hunting technology in Alberta, and indeed all of North America. These fluted, jagged stone points would be attached to a bone or wooden shaft and used to hunt enormous prey such as mammoths and mastodons.Source: Historical Resources Management Branch, Archaeological Survey Atlatl (spear-thrower) technology emerges in present-day Alberta. Atlatls were used by early hunter’s to increase the velocity of their projectile weapons. Spears or darts thrown with an atlatl could deliver devastating wounds to an animal, allowing the hunter to kill the animal from a safe distance.Source: Courtesy of Head-Smashed-In Buffalo Jump Bow and arrow technology reaches present-day Alberta.

Bow and arrow technology in North America appears to have developed first in the Arctic before spreading south throughout the continent. Power through the ages. When King Henry VIII divorced the first of his six wives in 1533, he triggered events that would profoundly alter the course of British history. 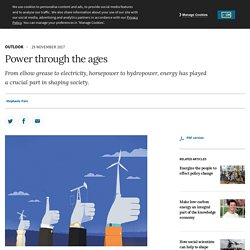 But, in discarding his Queen and breaking away from the Catholic church, he also started something that would transform society in ways no one then could have imagined. His seizure of church property delivered the coal-rich lands of northern England to profit-minded people who turned small-scale extraction into a flourishing industry.