Advent in France. Written by Monique Palomares In the Christian religion, Advent is the period preceding the coming of Jesus Christ on December 25th. 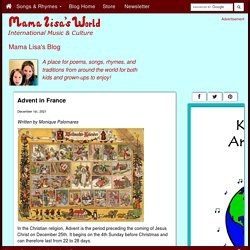 It begins on the 4th Sunday before Christmas and can therefore last from 22 to 28 days. Originally in the 5th century people fasted 3 times a week starting on Saint Martin’s Day on November 11th. Beginning in the 13th century, fasting was no longer required and nowadays fasting and abstinence are not practiced at all. On the four Sundays before Christmas, there are special readings during mass. Fun and Quirky Christmas Traditions From Around The World Kids News Article. For most Americans, Christmas celebrations entail decorating homes with lights and wreaths, putting up Christmas trees, finding meaningful gifts for loved ones, and, of course, binge-watching holiday classics like Elf and Home Alone. 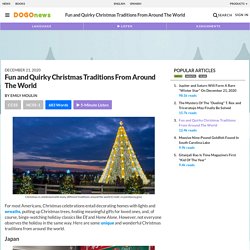 However, not everyone observes the holiday in the same way. Here are some unique and wonderful Christmas traditions from around the world. Japan A meal from Kentucky Fried Chicken (KFC) may not be your idea of a gourmet Christmas dinner. But in Japan, a bucket of the fast-food giant's world-famous fried chicken is a beloved holiday tradition. Ukraine In Ukraine, Christmas tree decorations include at least one or two spiderwebs. Iceland Every Christmas, kids in Iceland look forward to a visit from one of 13 Yule Lads, who take turns sneaking into their rooms on the 13 nights leading up to Christmas Eve. Italy For Italian children, the holiday highlight comes on January 5th of the new year, when they get a visit from a Christmas witch called La Befana.

Mexico. Facts about Christmas! As the year draws to an end, millions of people around the world look forward to sparkling decorations, colourful lights, delicious food, jolly music and exciting gifts. 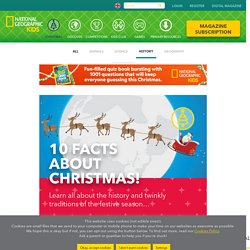 Christmas in Sydney - Christmas Lights, Carols, Choirs & Markets. Meaning of Christmas. What Christmas Dinner Around The World Looks Like. Fun Christmas Traditions From Around The World Kids News Article. Epiphany: What is it? - CBBC Newsround. Image copyright Getty Images The presents have been opened, the puddings eaten and lots of carols sung - and now it feels like Christmas has been and gone for another year. 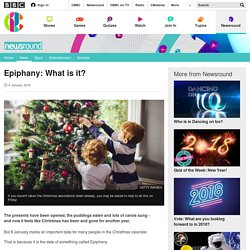 But 6 January marks an important date for many people in the Christmas calendar. That is because it is the date of something called Epiphany. What is Epiphany? Epiphany - also known as Three Kings' Day - is a Christian festival, which starts on 6 January. It is a special date in the Christmas story as it's when people celebrate how a star led the Magi - also known as the Three kings or the Wise Men - to visit the baby Jesus after he had been born. 'Epiphany' comes from the Greek word meaning 'to reveal', as it is when the baby Jesus was 'revealed' to the world.

This is why you might hear people say they've had an epiphany, when they've just realised something. In some countries many families will take off 6 January and exchange presents. What is Twelfth Night? But the date of it is a little bit confusing. What Is Boxing Day? Today’s Wonder of the Day was inspired by Aidan. 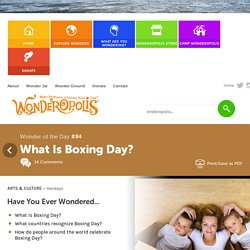 Aidan Wonders, “Why is Black Friday called boxing day in Canada?” Thanks for WONDERing with us, Aidan! People around the world celebrate Boxing Day on December 26. Although Americans don't recognize Boxing Day as a holiday, people in many other parts of the world, including Canada, New Zealand, Great Britain, and Australia, look forward to the day after Christmas each year. Let's take a look at a few of the theories about the origins of Boxing Day. Employers would give them the day off on December 26 and present them with gifts of money, food, and clothing, as a sort of Christmas bonus and token of appreciation. Another theory centers on the practice of opening the alms boxes in churches.

Others claim Boxing Day dates back to Victorian-era England. Though plenty of families and businesses still celebrate Boxing Day by helping the less fortunate, Boxing Day now revolves around celebrating with friends and family. Pictures of Christmas Past. What is Advent? - CBBC Newsround. Image copyright Getty Images When we think of the countdown to Christmas, it's tempting to just think of ripping open doors to get a chocolate before you go off to school. 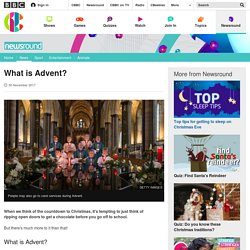 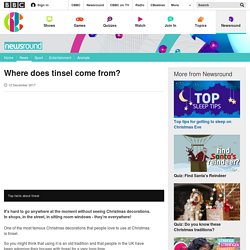 In shops, in the street, in sitting room windows - they're everywhere! One of the most famous Christmas decorations that people love to use at Christmas is tinsel. So you might think that using it is an old tradition and that people in the UK have been adorning their houses with tinsel for a very long time. But that is not actually true. Fun Holiday Traditions You May Be Tempted To Adopt Kids News Article. With Christmas less than two weeks away, you are probably getting into the festive spirit. 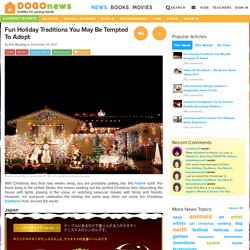 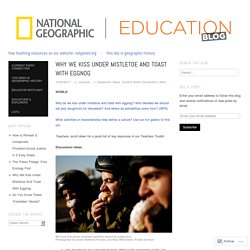 Who decided we should eat jelly doughnuts for Hanukkah? And where do poinsettias come from? (NPR) What activities or characteristics help define a culture? Use our fun gallery to find out. Teachers, scroll down for a quick list of key resources in our Teachers Toolkit. Discussion Ideas We love this photo of Israeli soldiers enjoying sufganiyot.Photograph by Israel Defense Forces, courtesy Wikimedia.

Jelly doughnuts are a Hanukkah treat. These creamy nogs bear little resemblance to Colonial egg’n’grog.Photograph by jill111, courtesy Pixabay. Eggnog is a sweet, creamy—and, yes, sometimes boozy—holiday treat. Love Christmas? Maybe you should thank the Victorians - CBBC Newsround. Media playback is unsupported on your device With songs playing in the shops and decorations hanging everywhere, it well and truly feels like Christmas. 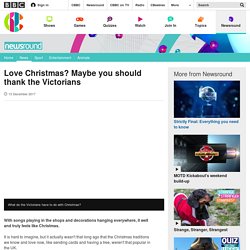 It is hard to imagine, but it actually wasn't that long ago that the Christmas traditions we know and love now, like sending cards and having a tree, weren't that popular in the UK. At the beginning of the 19th century - so just over 200 years ago - many of the traditions that we know and love didn't exist! Image copyright Getty Images That is until the Victorians came along, then all of that changed. Christmas aound the world. Christmas Around the World, Christmas Traditions and Celebrations in Different Countries and Cultures.