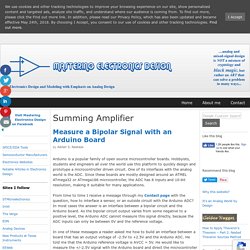 Hobbyists, students and engineers all over the world use this platform to quickly design and prototype a microcontroller driven circuit. One of its interfaces with the analog world is the ADC. Since these boards are mostly designed around an ATMEL ATmega32 or ATmega168 microcontroller, the ADC has 8 inputs and 10-bit resolution, making it suitable for many applications. From time to time I receive a message through my Contact page with the question, how to interface a sensor, or an outside circuit with the Arduino ADC? In most cases the answer is an interface between a bipolar circuit and the Arduino board.

In one of these messages a reader asked me how to build an interface between a board that has an output voltage of -2.5V to +2.5V and the Arduino ADC. Help me choose a differential amplifier. I am not a certified electronics engineer, so I bow to those who are. 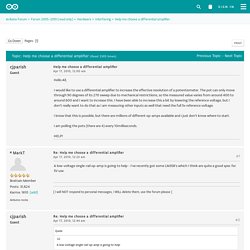 Having said that, I don't think there is anything nasty about this. These article explains how an inverting operational amplifier circuit works. How do I connect differential input amp to Arduino DAC? How to Control Feedback in a Sound System. By Shure Notes Editors. 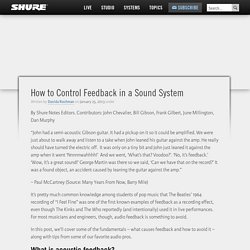 Contributors: John Chevalier, Bill Gibson, Frank Gilbert, June Millington, Dan Murphy “John had a semi-acoustic Gibson guitar. It had a pickup on it so it could be amplified. We were just about to walk away and listen to a take when John leaned his guitar against the amp. Lives in the Balance and Dr. Greene's approach. Legacy products. Sensorlab The STEIM SensorLab was one of the first small, general purpose, sensor to midi interfaces for the prototyping of musical instruments and interactive control systems. 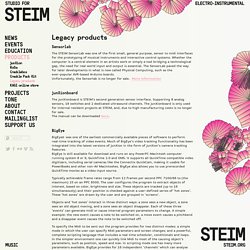 Whether the computer is a central element in an artists work or simply a tool bridging a technological gap, the need for real world input and output is essential. High Tech MIDI Devices. Music Magic USA Accordion and Midi CyberStore - Your source for the Roland FR-7x Accordion. MIDI 9 - Add MIDI to Any Keyboard Instrument. Highly Liquid: DIY MIDI Electronics. DIY MIDI controllers using PIC microcontrollers and Basic Stamps. Introduction By combining a PIC microcontroller or Basic Stamp II with a few passive components it is not difficult to construct your own knob box, trigger box, or other MIDI input device. 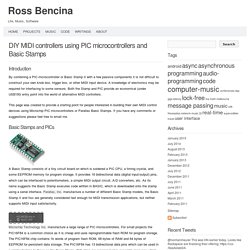 A knowledge of electronics may be required for interfacing to some sensors. Both the Stamp and PIC provide an economical (under US$100) entry point into the world of alternative MIDI controllers. This page was created to provide a starting point for people interested in building their own MIDI control devices using Microchip PIC microcontrollers or Parallax Basic Stamps. If you have any comments or suggestions please feel free to email me. Basic Stamps and PICs. Isomorphic keyboard. Fig. 1: The Wicki isomorphic keyboard note-layout, invented by Kaspar Wicki in 1896. 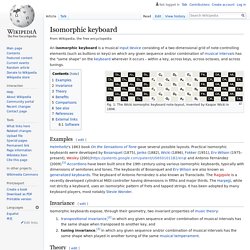 Examples[edit] Helmholtz's 1863 book On the Sensations of Tone gave several possible layouts. CONTROLLER ZONE. Terpstra Keyboard. Funding a production run for the Second Generation Terpstra Keyboard Prototypes was a community project, meaning the Terpstra is not a commercially available product, and can’t be purchased anywhere. 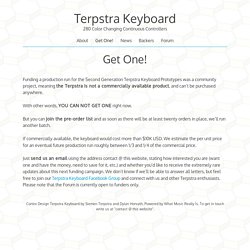 With other words, YOU CAN NOT GET ONE right now. But you can join the pre-order list and as soon as there will be at least twenty orders in place, we’ll run another batch. If commercially available, the keyboard would cost more than $10K USD. We estimate the per unit price for an eventual future production run roughly between 1/3 and 1/4 of the commercial price. Just send us an email using the address contact @ this website, stating how interested you are (want one and have the money, need to save for it, etc.) and whether you’d like to receive the extremely rare updates about this next funding campaign. Microtonality, Tunings and Modes. There is still a lot of good music waiting to be written in C major. — Arnold Schönberg One of the most liberating aspects about using a computer to compose music is that non-traditional “frequency space” can be explored in different ways without having to address the limitations of physical instruments or human performers. 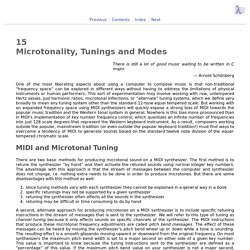 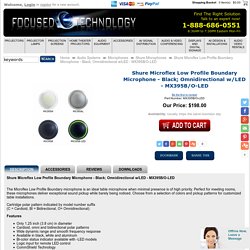 Perfect for meeting rooms, these microphones deliver exceptional sound pickup while barely being noticed. Choose from a selection of colors and pickup patterns for customized table installations. Audio-Technica PRO 44 - microphone. Shure MX393/O Microflex Black Omnidirectional Condenser Boundary Microphone - www.rmcaudiodirect.com. - Acoustical Measurements for the Rest of Us. How to make acoustical measurements without a Ph.D. 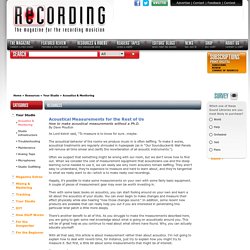 As Lord Kelvin said, “To measure is to know for sure…maybe. The acoustical behavior of the rooms we produce music in is often baffling. To make it worse, acoustical treatments are regularly shrouded in hypespeak (as in “Our Soundsucker® Wall Panels will remove all time smear and clarify the reverberation of all acoustic instruments.”). Often we suspect that something might be wrong with our room, but we don’t know how to find out.

When we consider the cost of measurement equipment that acousticians use and the steep learning curve needed to use it, we can easily see why room acoustics remain baffling. Software to analyze and equalize frequency response of entire sound system? Sweeping the Frequencies for Precise EQing - Tuts+ Music & Audio Tutorial. Exploring the Boundaries – A Close Look at an Invisible Microphone. By Ken Hamberg Boundary microphones as a class are often overlooked – literally. Flat-lying and inconspicuous by design, they lack the glamorous appearance and prestige of their conventional large-diaphragm counterparts, which are often photographed in the company of the world's best-known and culturally iconic singers, entertainers and public servants.

Boundary microphones in fact enjoy a ubiquitous if highly discreet presence in recording studios, concert halls, installations, public address systems, conference and meeting rooms, and houses of worship. Presence (amplification) In an amplifier, a presence control boosts the upper mid-range frequencies to make the sounds of voices and instruments with similar tonal ranges seem more "present".[1] On television production studio's sound desk, there can be several presence controls, for several different, switchable, frequencies.[2] There is a limit to the flexibility of such controls, and they are sometimes insufficient.

If the degree of mis-match between microphones is great, simply increasing presence is not enough, and instead a sound engineer will use a graphic equalizer, sometimes several, each connected to an individual sound channel.[3] Presence controls can also be found on electric guitar amplifiers. The first presence control on a Fender amplifier, for example, appeared in 1954 on the Twin. In 1955 it appeared on the 1/15 Pro-Amp, the 3/10 Bandmaster, the 2/10 Super,[4] and the 4/10 Bassman.[5] The original Fender presence control acted upon the amplifier's negative-feedback loop. Optimum Stereo Signal Recording with the Jecklin Disk. Josephson Engineering Photo of a Jecklin-type disk made by MB Electronics in the mid 1980s. The central plate is about 8 mm (a little less than 3/8") thick, covered on both sides with 8 mm thick foam.

The foam is probably too thin; there is still too much high frequency energy reflected from the disk. The Jecklin-type disks supplied by Josephson Engineering since about 1995 use 25 mm foam. Multimedia Audio Course - Microphones and miking techniques - Stereo miking techniques: near coincident microphones - Sound engineering - Audiosonica. Hit 883 times These techniques require two microphones positioned at 16-17 cm apart, which represents the distance between the human ears.