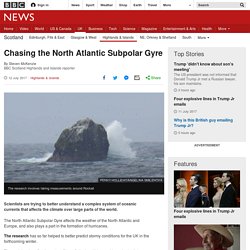 *****Marine Institute sur Twitter : "Thanks to the Quinlan-Owens family from Galway for sharing this video of the deployment of a Marine Institute Argo Float in December. For more on this story please see - #marine #argofloat #ocean #da. My mum passed away before I went into teaching and I don't have much of her stuff. This was recently given to me - her O-Level geography folders. Currently finding inspiration from 1963 ♥️□ #geographyteacher… *****Gulf Stream influence: Population Centers in the Arctic. Source.

Weakening of Gulf Stream could bring colder UK winters. Deep snow drifts, skating along frozen rivers and weeks of sub-zero temperatures used to be normal features of a British winter, but they are rare today. 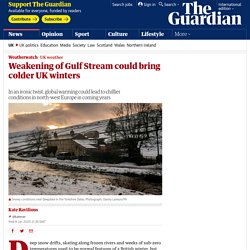 *****How does plastic move around the oceans? Thermohaline circulation / ocean currents. Gerard McCarthy sur Twitter : "First of all a bit of terminology. The Gulf Stream in itself isn't particularly unique. It's one of 5 such currents in the world. And it bears a lot of similarities with the Kuroshio in particular. So that wouldn't explain d. Adrian Kavanagh sur Twitter : "Recent research by geographers, of relevance to #OceanWeek; latest week in the @geogsocire's #YearofGeography series Newton, Huuse, & Brocklehurst 2018, A persistent Norwegian Atlantic Current through the Pleistocene glacial.

Now, the idea that the Gulf Stream is responsible for this is pretty deeply engrained in people's consciousness. I love this quote from Dave Ellett's 1993 paper in Weather entitled. The only constant is change, and Earth changes a lot. Check out this gallery of Earth observation maps on the Esri Living Atlas #gis #gisday Map: Sea surface temperature by @NOAA. *****Frontal rain - Liam Dutton: See the band of cloud over the southern UK at the moment? It stretches thousands of miles across the Atlantic Ocean to northern Florida in the US. In fact, people in Disneyland, Orlando could look up and see the sam. Lego Lost At Sea sur Twitter : "Do left footed shoes take one route across the ocean and right shoes another? Fascinating story in @thetimes today about the @Nike trainers and other shoes washing up. What's your experience - do you find left handed shoes.

Why are Nike trainers washing up on beaches? Image copyright Tracey Williams Over the past year, from Bermuda and the Bahamas to Ireland and Orkney, hundreds of pairs of unworn shoes have washed up on beaches. 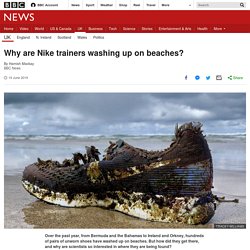 But how did they get there, and why are scientists so interested in where they are being found? In September 2018, on Flores Island, in the remote Atlantic archipelago of the Azores, Gui Ribeiro began noticing strange items washing ashore. At first they appeared in small numbers and could be dismissed as ordinary artefacts lost by individuals - mere flotsam among the churn of man-made waste that inhabits the world's oceans.

Soon, though, it became clear these Azorean arrivals were part of a greater group. Trainers, flip-flops and a selection of other footwear were appearing with a regularity that singled them out from the other tidal deposits. *****The relationship between Mangroves Forests and Ocean Currents. The solid boxes are mangrove-limiting currents and the dashed boxes are mangrove-enhancing currents. Warm (and cold) currents limit or expand the latitudinal. DYK the earth's largest waterfall is in the ocean?! Amazing, but true #30DaysofOcean. Do you know where to find the largest waterfall on Earth? It's the Denmark Strait cataract, an underwater waterfall!

A band of equal average annual temperature between Europe and North America. Demonstrates the importance of the gulf stream for keeping Europe quite a few degrees above it's latitude would expect. #dataviz #climateviz #maps #mapping #GIS #climate. What causes the motion in the ocean? Don't look at this thing about Antarctic iceberg motion. The last link between Antarctica and South America breaks, opening the Drake Passage, allowing the unimpeded flow of the Antarctic Circumpolar Current. Thermally isolated from the rest of the oceans, the Antarctic ice sheet can grow. 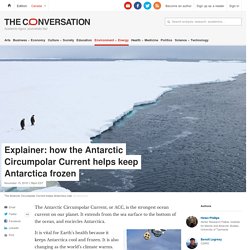 It extends from the sea surface to the bottom of the ocean, and encircles Antarctica. It is vital for Earth’s health because it keeps Antarctica cool and frozen. It is also changing as the world’s climate warms. Scientists like us are studying the current to find out how it might affect the future of Antarctica’s ice sheets, and the world’s sea levels. The ACC carries an estimated 165 million to 182 million cubic metres of water every second (a unit also called a “Sverdrup”) from west to east, more than 100 times the flow of all the rivers on Earth. The tightest geographical constriction through which the current flows is Drake Passage, where only 800 km separates South America from Antarctica. Read more: Antarctica has lost 3 trillion tonnes of ice in 25 years. What is the Antarctic Circumpolar Current? A satellite view over Antarctica reveals a frozen continent surrounded by icy waters.

MapScaping sur Twitter : "What you are looking at is surface ocean currents that have been colored to match the sea surface temperatures. source : Science on a sphere #Geography #science #oceanography #oceanlife #ocean #sealife #climatology #climate #clim. Interesting research report @DavidBflower "UK will see continued impacts of climate change over the next 20 years" #ClimateChange #AtlanticMeridionalOverturningCirculation - Slowing Gulf Stream current to boost warming for 20 years. Image copyright SPL The prospect of the Gulf Stream slowing down and even stopping altogether has worried many experts in recent years. 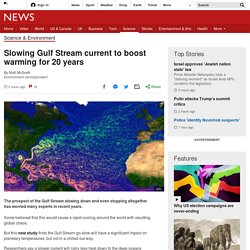 Some believed that this would cause a rapid cooling around the world with resulting global chaos. But this new study finds the Gulf Stream go-slow will have a significant impact on planetary temperatures, but not in a chilled out way. Researchers say a slower current will carry less heat down to the deep oceans meaning more will enter the atmosphere. The Atlantic currents which keep Europe and the US warm have reached their weakest levels in 1600 years #environment… Do you know what causes #ocean currents? Check out our new #storymap to find out #Maps @EsriStoryMaps… Avoid Gulf stream disruption at all costs, scientists warn. Serious disruption to the Gulf Stream ocean currents that are crucial in controlling global climate must be avoided “at all costs”, senior scientists have warned. 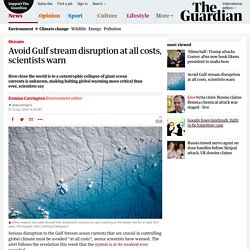 The alert follows the revelation this week that the system is at its weakest ever recorded. Past collapses of the giant network have seen some of the most extreme impacts in climate history, with western Europe particularly vulnerable to a descent into freezing winters. Atlantic Ocean circulation at weakest point in more than 1,500 years #AMOC… Climate change dials down Atlantic Ocean heating system. Image copyright WHOI A significant shift in the system of ocean currents that helps keep parts of Europe warm could send temperatures in the UK lower, scientists have found. 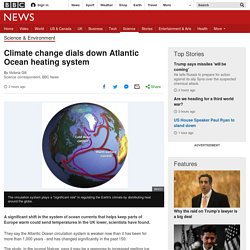 They say the Atlantic Ocean circulation system is weaker now than it has been for more than 1,000 years - and has changed significantly in the past 150. The study, in the journal Nature, says it may be a response to increased melting ice and is likely to continue. Researchers say that could have an impact on Atlantic ecosystems. Gulf Stream current at its weakest in 1,600 years, studies show. The warm Atlantic current linked to severe and abrupt changes in the climate in the past is now at its weakest in at least 1,600 years, new research shows.

The findings, based on multiple lines of scientific evidence, throw into question previous predictions that a catastrophic collapse of the Gulf Stream would take centuries to occur. Such a collapse would see western Europe suffer far more extreme winters, sea levels rise fast on the eastern seaboard of the US and would disrupt vital tropical rains. The new research shows the current is now 15% weaker than around 400AD, an exceptionally large deviation, and that human-caused global warming is responsible for at least a significant part of the weakening. The current, known as the Atlantic Meridional Overturning Circulation (Amoc), carries warm water northwards towards the north pole. There it cools, becomes denser and sinks, and then flows back southwards. . … we have a small favour to ask. This natural experiment started in 1992 when three shipping containers lost about 30,000 rubber ducks in the middle of the ocean. Over the years the ducks were sighted across the globe allowing scientists to better understand ocean currents. Source.

Ocean-wide sensor array provides new look at global ocean current. The North Atlantic Ocean is a major driver of the global currents that regulate Earth’s climate, mix the oceans and sequester carbon from the atmosphere — but researchers haven’t been able to get a good look at its inner workings until now. 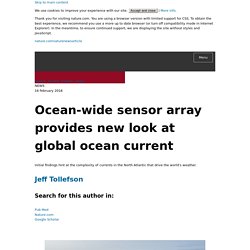 The first results from an array of sensors strung across this region reveal that things are much more complicated than scientists previously believed. Tomorrow's World - Could an ice age happen again? Ocean dynamics in a coffee cup! Looking forward to #OSM18, talking and to discuss #physics of #ENSO, #biomes, #thermohalinecirculation. #coffeecupscience :)…