Music as a Teaching Tool. Many teachers shy away from including music in their classrooms because they presume they need musical training to use music as a teaching tool. 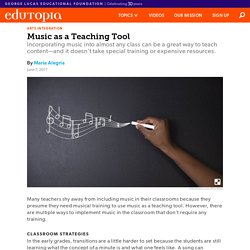 However, there are multiple ways to implement music in the classroom that don’t require any training. Classroom Strategies. Arts Integration Lesson: Historical Figures Mashup. Who doesn’t love a good mashup? 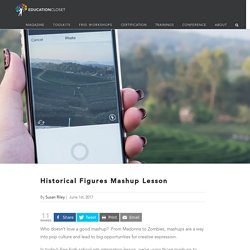 From Madonna to Zombies, mashups are a way into pop culture and lead to big opportunities for creative expression. 20 Ways to Keep Your Students' Attention. As the end of the year approaches, it can be more and more challenging to keep your students' attention. 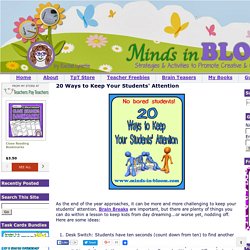 If You Get the Chills From Music, You May Have a Unique Brain - Neuroscience News. Summary: Researchers report on why some people experience more intense emotions while listening to music. 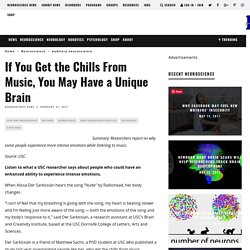 Source: USC. Listen to what a USC researcher says about people who could have an enhanced ability to experience intense emotions. When Alissa Der Sarkissian hears the song “Nude” by Radiohead, her body changes. “I sort of feel that my breathing is going with the song, my heart is beating slower and I’m feeling just more aware of the song — both the emotions of the song and my body’s response to it,” said Der Sarkissian, a research assistant at USC’s Brain and Creativity Institute, based at the USC Dornsife College of Letters, Arts and Sciences. Der Sarkissian is a friend of Matthew Sachs, a PhD student at USC who published a study last year investigating people like her, who get the chills from music. The study, done while he was an undergraduate at Harvard University, found that people who get the chills from music actually have structural differences in the brain.

Abstract. Cast 10 engagement. Make Images, Videos and Web Stories for Free in Minutes. Why Identity and Emotion are Central To Motivating the Teen Brain. Log In - New York Times. My Sharebar by Post Planner. I taught my 5th-graders how to spot fake news. Now they won’t stop fact-checking me. Crazy Magnetic Putty - Limited Trending Sales. Game Based Learning. Game Mechanics. Extra Credits: Gamifying Education. Gamification Engages Students with Intrinsic and Extrinsic Motivators. By Michelle Peterson Monday, August 11, 2014 On a planet where people spend 3 billion hours a week playing video and computer games, it's a good chance that using the tools that keep people engaged in games might work in a learning environment, too. 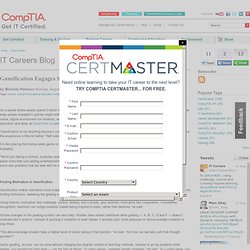 Gamifying classes is also a good way to humanize the online, digital environment for students, according to Mark Relf, the state program coordinator for Rasmussen College, speaking to educators and allies at CompTIA's Academy Educator Conference in Phoenix. “Gamification is not anything anyone’s cornered the market on. These are techniques and tricks we can do within our classes to make the experience a little bit better,” Relf said. It’s like playing the license plate game on a long road trip: adding make-believe and goal setting to arduous tasks makes them more engaging.

The Big List of Class Discussion Strategies. Students Sitting Around Too Much? Try Chat Stations. You’ve probably heard of — and maybe used — learning stations in your classroom. 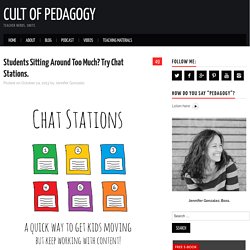 With stations, teachers set up activities around their rooms, then have students rotate from station to station, performing each task. 5 Ways to Create Virtual Learning Experiences in Your Classroom – The Tech Edvocate. How Virtual Reality is Changing Education – The Tech Edvocate. [#BeFearless Part 1] How VR Can Defeat Your Fear of Public Speaking – Samsung Global Newsroom. Salminaz Shimshilova, a 29-year-old fashion designer based in Dubai, is terrified of public speaking. 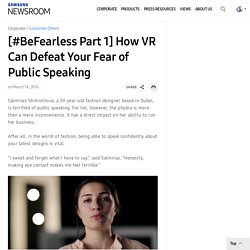 For her, however, the phobia is more than a mere inconvenience. Big-five-personality-traits. BizPart Engage Steven Reiss' Sixteen motivators. Neural networks breakthrough: Scientists get computer to think like a human using perceptual grouping. Computer scientists in Finland have made a breakthrough in artificial intelligence research by using a neurobiological approach to get a deep learning neural network to detect objects in an image all by itself with an accuracy rate of 75%. 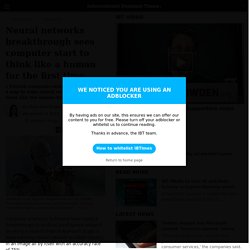 The human brain is a wondrous thing – it is so incredibly clever that it has taken decades of research and we are still nowhere close to being able to replicate the lightning-fast computational speed of the mind. At the moment, the best that computer scientists can come up with are neural networks, which are large networks of artificially intelligent classical computers that are trained using computer algorithms to solve complex problems in a similar way to the human central nervous system, whereby different layers examine different parts of the problem and combine to produce an answer.

Gestalt Laws of Perceptual Organization. Have you ever noticed how a series of flashing lights often appears to be moving, such as neon signs or strands of Christmas lights? 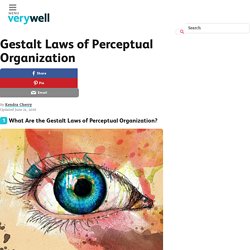 According to Gestalt psychology, this apparent movement happens because our minds fill in missing information. This belief that the whole is greater than the sum of the individual parts led to the discovery of several different phenomena that occur during perception. The image on the left illustrates the law of closure, which states that objects tend to be seen as part of a whole. There are no circles or triangles in this image, but our minds fill in the missing information to create these shapes.

MaKey MaKey Musical Paintings. What Does Integration Really Mean? Have you ever worried about subject equity? 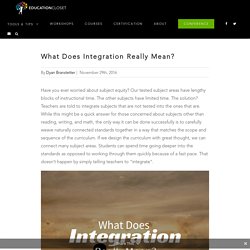 Our tested subject areas have lengthy blocks of instructional time. The other subjects have limited time. The solution? Teachers are told to integrate subjects that are not tested into the ones that are. Measuring Student Engagement During Observation – Swivl. Historically, teacher observations happened infrequently, and were usually done by another school staff member who would sit in on a class. The observer would be tasked with watching the whole class and analyzing their behavior to review the teacher’s performance and provide professional development. A key element of the observation was measuring student engagement in the form of questions that were asked, dialogue that took place, and more. But this one-to-many setup didn’t allow authentic observation and left gaps in knowledge as to the level of engagement the students were experiencing.

The main problem with traditional observations is that they were too infrequent, having an observer in the class changed its dynamic, and made it less effective. Oliver Herring's TASK Homepage. TASK: Creating Art, Fun and Team Spirit in Your School. Ah, November. Teachers just got through the excitement of Halloween only to have to deal with report cards, conferences, Thanksgiving and, before you know it, the “holiday season” and all that entails including a school vacation. Social and Emotional Connections through Arts Integration. I started Arts Integration about a year and a half ago.

I quickly “got comfortable with being uncomfortable” as I stumbled through the details of dance, delighted in the excitement of music, inquired the compositions of visual art, and plunged headfirst into the elements of drama. When beginning this journey, I knew that students would love the process, love to create, love to explore. Angela Lee Duckworth: Grit: The power of passion and perseverance. Log In. Halloween Activity: Live Film Scoring With Elementary Students. Group composition: film scoring Recently one of the members of the Midnight Music Community (MMC) – teacher Brigitte Louise Lessard from Québec, Canada – shared a halloween music technology lesson she has had much success with in her elementary classes.

It’s a film scoring activity, but rather than have the students compose a score and match it up to the video in a digital audio workstation like GarageBand or Mixcraft, she has the students perform the music live, along with the film while it’s being shown on a data projector. She video-records the performance and then matches it up with the original video. The project reminds me of the way pianists would improvise music to accompany silent films in the 1920s. Silent film accompanists would either improvise music from scratch, use a compilation of existing (often well-known) classical and theatre music themes, or they would use a combination of the both. Lesson grid NEWSLETTER. Seesaw. Feel-Bad Education: The Cult of Rigor and the Loss of Joy (#) September 15, 2004 The Cult of Rigor and the Loss of Joy By Alfie Kohn “Why are our schools not places of joy?”

Teaching knowledge has always been an essential component of the American school system, but recent instructional standards have also highlighted the importance of teaching cognitive skills. Engagement Vs. Compliance. The “Rule of Two Feet” Kids Speak Out on Student Engagement. Game Based Learning for Language Learners. Storycraft: Using the world of Minecraft as inspiration for writing - ELT Sandbox. HootBoard. Why Music Makes Our Brain Sing. Modes and Video Games Music. Structuring Collaboration for Student Success (Keys to PBL Series Part 3) Building Rigorous Projects That Are Core to Learning (Keys to PBL Series Part 2)