Consciousness Is Made of Atoms, Too. 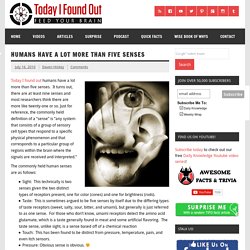 It turns out, there are at least nine senses and most researchers think there are more like twenty-one or so. Just for reference, the commonly held definition of a “sense” is “any system that consists of a group of sensory cell types that respond to a specific physical phenomenon and that corresponds to a particular group of regions within the brain where the signals are received and interpreted.” The commonly held human senses are as follows: Sight: This technically is two senses given the two distinct types of receptors present, one for color (cones) and one for brightness (rods).Taste: This is sometimes argued to be five senses by itself due to the differing types of taste receptors (sweet, salty, sour, bitter, and umami), but generally is just referred to as one sense. Human Senses. Nearly everyone has experienced a moment when a faint fragrance brings a memory of a long-lost moment in time crashing back to the forefront of their minds.Often we will have forgotten about the event completely, yet it transpires our unfathomable minds have filed it neatly in some unreachable corner of the brain, primed for instant retrieval.

Nigel Marven goes in search of the most disgusting and the most attractive smells, sets out to discover why we are excellent at seeing some things, but sometimes miss what’s right in front of our eyes, the biological reasons why humans eat such a diverse range of foods, from rotten raw ducks eggs to a sweaty blue cheese, demonstrates that when it comes to our sense of touch humans are similar to elephants, tracks down the sounds which have the most powerful emotional effects on us and joins stunt co-ordinator Marc Cass for a dramatic drive and experiences how the balance organs let us know how we’re being yanked around and even turned upside down.

Is Sense of Smell Powered by Quantum Vibrations? Smell that? 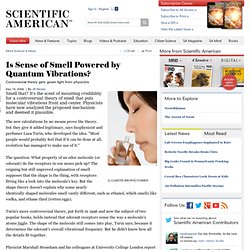 It's the scent of mounting credibility for a controversial theory of smell that puts molecular vibrations front and center. Physicists have now analyzed the proposed mechanism and deemed it plausible. The new calculations by no means prove the theory, but they give it added legitimacy, says biophysicist and perfumer Luca Turin, who developed the idea. "Most people would probably feel that if it can be done at all, evolution has managed to make use of it.

" The question: What property of an odor molecule (or odorant) do the receptors in our noses pick up? Turin's more controversial theory, put forth in 1996 and now the subject of two popular books, holds instead that odorant receptors sense the way a molecule's atoms jiggle. Physicist Marshall Stoneham and his colleagues at University College London report they have constructed a specific mechanism based on the properties of so-called G-protein coupled receptors, which project from olfactory cells inside the nose. TED: The Science Of Scent (Shatters Ideas of Human Senses) Auditory Transduction. Interactive Ear tool showing how the ear works by Amplifon. The ear is the organ which controls hearing and balance, allowing us to understand our surroundings and position ourselves correctly. 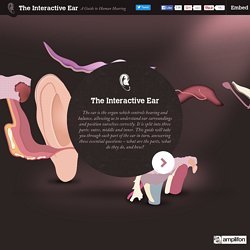 It is split into three parts: outer, middle and inner. This guide will take you through each part of the ear in turn, answering those essential questions – what are the parts, what do they do, and how? Pinna Helix Antihelix Concha Antitragus Lobe Cartilage Temporal Muscle (Temporalis) Temporal Bone Semicircular Canals Ganglia of the Vestibular Nerve Facial Nerve Ear Canal (External acoustic meatus) Mastoid Process Internal Jugular Vein Styloid Process Internal Cartoid Artery Eardrum (Tympanic Membrane) Auditory Tube (Eustachian Tube) Outer Ear – Welcome to the Interactive Ear! Uncoiling the spiral: Maths and hallucinations. December 2009 You can read a more accessible version of this article here. 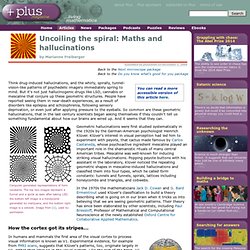 Think drug-induced hallucinations, and the whirly, spirally, tunnel-vision-like patterns of psychedelic imagery immediately spring to mind. But it's not just hallucinogenic drugs like LSD, cannabis or mescaline that conjure up these geometric structures. People have reported seeing them in near-death experiences, as a result of disorders like epilepsy and schizophrenia, following sensory deprivation, or even just after applying pressure to the eyeballs.

So common are these geometric hallucinations, that in the last century scientists began asking themselves if they couldn't tell us something fundamental about how our brains are wired up. Computer generated representations of form constants. Things You Cannot Unsee (and What That Says About Your Brain) - Alexis C. Madrigal. We're going to rewire your brain. 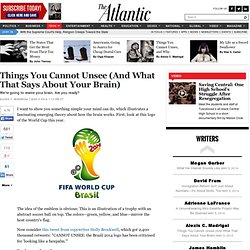 Are you ready? I want to show you something simple your mind can do, which illustrates a fascinating emerging theory about how the brain works. First, look at this logo of the World Cup this year. The idea of the emblem is obvious: This is an illustration of a trophy with an abstract soccer ball on top. The colors—green, yellow, and blue—mirror the host country's flag. Now consider this tweet from copywriter Holly Brockwell, which got 2,400 thousand retweets: "CANNOT UNSEE: the Brazil 2014 logo has been criticised for 'looking like a facepalm.'" You know, a facepalm: With this new cue—to see the logo as a facepalm—the yellow part becomes an arm with its hand pressed into a green head.

Synesthesia: A film by Jonathan Fowler.