What is the future of Virtual Reality? Virtual Reality (VR) offers an immersive 3D experience, transporting us to new worlds via a range of innovative new gadgets. 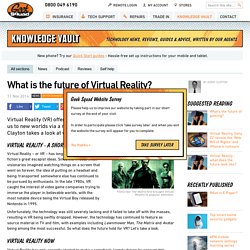 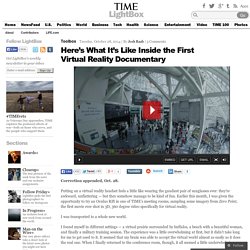 Putting on a virtual reality headset feels a little like wearing the gaudiest pair of sunglasses ever: they’re awkward, unflattering — but they somehow manage to be kind of fun. Earlier this month, I was given the opportunity to try an Oculus Rift in one of TIME’s meeting rooms, sampling some imagery from Zero Point, the first movie ever shot in 3D, 360 degree video specifically for virtual reality.

I was transported to a whole new world. Virtual Reality Approaches Total Immersion - Tom's Guide. NEW YORK — Virtual reality is only just starting to catch on with the general public, but experts in the field already see how far it can go in the not-too-distant future. 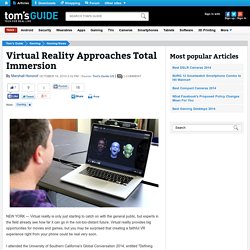 Virtual reality provides big opportunities for movies and games, but you may be surprised that creating a faithful VR experience right from your phone could be real very soon. I attended the University of Southern California's Global Conversation 2014, entitled "Defining Future Reality," where VR was the topic du jour. With gadgets like the Oculus Rift on the way, it's easy to see VR solely as a gaming peripheral, but it has the potential to be much more. MORE: 5 Technologies That Are Way Older Than You Think Elizabeth Daley, dean of the USC School of Cinematic Arts, kicked off the afternoon's talk by discussing how VR can advance diplomacy, health, education and entertainment — sometimes all at once.

One of the conference's most intriguing suggestions came from Yannis C. Wearable Tech: Samsung VR Headset Arrives in December. SAN FRANCISCO—Samsung may be the world's largest smartphone maker, but the South Korean technology giant isn't ready to rest on its laurels. 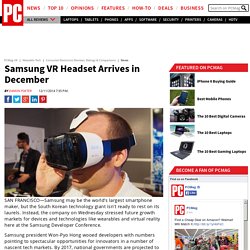 Instead, the company on Wednesday stressed future growth markets for devices and technologies like wearables and virtual reality here at the Samsung Developer Conference. Samsung president Won-Pyo Hong wooed developers with numbers pointing to spectacular opportunities for innovators in a number of nascent tech markets. By 2017, national governments are projected to spend more than twice as much on healthcare as they do today, he noted. The tens of millions of wearables shipping in 2014 projects to hundreds of millions of units shipped in just a few short years.

Earlier this year, Samsung unveiled a virtual reality headset it built with the help of Oculus VR called Gear VR, which Samsung promised would be released before the end of the year. It appears the tech giant plans to live up to that promise. Archos unveil budget £25 virtual reality headset. French electronic company Archos has unveiled a budget VR headsetIt will cost just £25 ($30) and goes on sale in NovemberThe product straps to your head and a phone slides in the frontTwo eyepieces then allow stereoscopic views of the phoneVarious 3D-enabled software can then be used with the device By Jonathan O'Callaghan for MailOnline Published: 11:04 GMT, 17 October 2014 | Updated: 14:05 GMT, 17 October 2014. 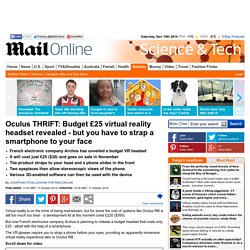 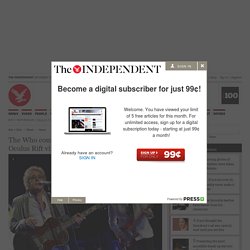 Surviving members Pete Townshend and Roger Daltrey appear to have concluded that if you can’t beat them, join them. In July, Daltrey said he “felt sorry” for modern gig-goers who go to concerts only to spend half their time filming on mobile phones. “I find it weird,” the singer, 70, said. Now the band, which has pushed the boundaries of rock musically and visually throughout its career, has been persuaded that an “immersive app”, is the best way to connect with a digitally-enabled teenage audience which might never have heard “My Generation”. Technology is transforming experiences, but are brands keeping pace? Will Northover, client services manager at specialist experiential agency Blackjack Promotions, argues that the latest technologies and gadgets are revolutionising experiential. 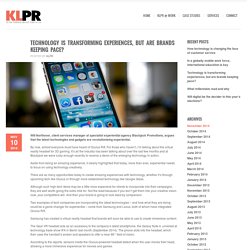 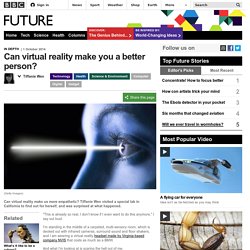 Tiffanie Wen visited a special lab in California to find out for herself, and was surprised at what happened. "This is already so real, I don’t know if I even want to do this anymore," I say out loud. I’m standing in the middle of a carpeted, multi-sensory room, which is decked out with infrared cameras, surround sound and floor shakers, and I am wearing a virtual reality headset made by Virginia-based company NVIS that costs as much as a BMW. BBC World News - Click, 27/09/2014 GMT, Could virtual reality help build better cities? Virtual reality throws you in at the deep end - tech - 12 October 2014. The latest prototype of virtual reality headset Oculus Rift allows you to step right into the movies you watch and the games you play AN OLD man sits across the fire from me, telling a story. 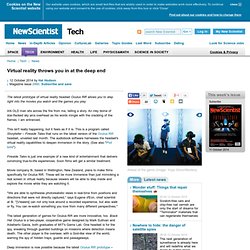 An inky dome of star-flecked sky arcs overhead as his words mingle with the crackling of the flames. I am entranced. This isn't really happening, but it feels as if it is. This is a program called Storyteller – Fireside Tales that runs on the latest version of the Oculus Rift headset, unveiled last month.