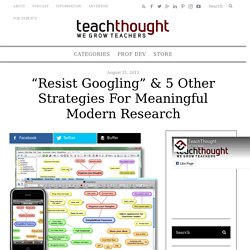 Inquiry-based learning is one of the current buzz phrases, meaning students should ask and answer questions as a primary method in the classroom. It’s a great initiative, but it puts teachers on the hot seat. How to Insert Videos Into Google Slides Without Using YouTube. 6 Ed Tech Tools to Try in 2017. Listen to this post as a podcast (sponsored by Kiddom): To celebrate the launch of my brand-new, fully redesigned Teacher’s Guide to Tech, I’m hand-picking six ed tech tools that deserve more teachers’ attention. 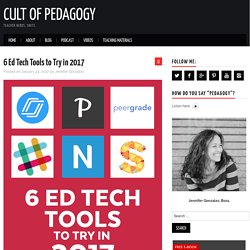 These are not all brand-new tools, but I thought each one offered something pretty special for the classroom. Check them out. 8 digital skills we must teach our children. The social and economic impact of technology is widespread and accelerating. 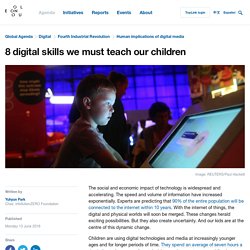 The speed and volume of information have increased exponentially. Experts are predicting that 90% of the entire population will be connected to the internet within 10 years. With the internet of things, the digital and physical worlds will soon be merged. These changes herald exciting possibilities. About Canva. Ed Tech RCE Coach. Exploring a new frontier this holiday shopping season: Virtual reality. It is a sad truth for technology enthusiasts that it’s almost the end of 2016, and we still don’t have flying cars, a moon colony or fully functional robot butlers. 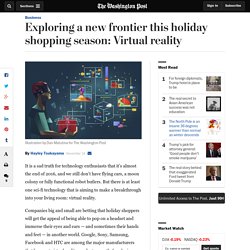 But there is at least one sci-fi technology that is aiming to make a breakthrough into your living room: virtual reality. Companies big and small are betting that holiday shoppers will get the appeal of being able to pop on a headset and immerse their eyes and ears — and sometimes their hands and feet — in another world. Google, Sony, Samsung, Facebook and HTC are among the major manufacturers that have put virtual reality products, mostly for playing games, on the market in the past several months. IBM Watson Launches First Mobile App For Education. How to Setup Multiple Monitors in Windows 10. When you connect an additional monitor to your Dell computer, Windows will automatically detect the monitors and displays your computer's desktop. 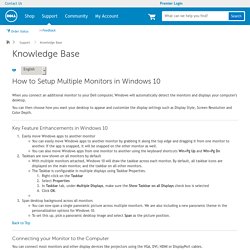 You can then choose how you want your desktop to appear and customize the display settings such as Display Style, Screen Resolution and Color Depth. Key Feature Enhancements in Windows 10 Easily move Windows apps to another monitor You can easily move Windows apps to another monitor by grabbing it along the top edge and dragging it from one monitor to another. If the app is snapped, it will be snapped on the other monitor as well. Control What's Projected With Chromecast or Extended Display. Whether it is to quickly search for a video, find a bookmark on Pinterest, or dig-up a file in your Google Drive there are times when you'll find your computer hooked to a projector, but you don't want everything projected in front of your classroom. 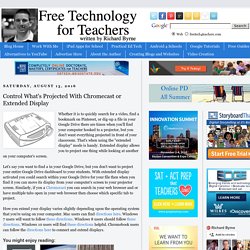 That's when using the "extended display" mode is handy. Extended display allows you to project one thing while looking at another on your computer's screen. Displaying YouTube Without Distractions. In my previous post I shared the idea of using extended display mode to choose what is and isn't displayed on the projector in your classroom. 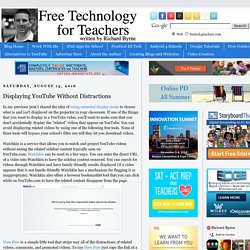 If one of the things that you want to display is a YouTube video, you'll want to make sure that you don't accidentally display the "related" videos that appear on YouTube. You can avoid displaying related videos by using one of the following free tools. None of these tools will bypass your school's filter nor will they let you download videos. Watchkin is a service that allows you to watch and project YouTube videos without seeing the related sidebar content typically seen on YouTube.com. Watchkin can be used in a few ways. View Pure is a simple little tool that strips way all of the distractions of related videos, comments, and promoted videos. Collaboration, meeting, and teaching platform. Try DropItToMe to Collect Files from Students and Colleagues. DropItToMe is a free tool that you can integrate with your Google Drive, Dropbox, or OneNote account. 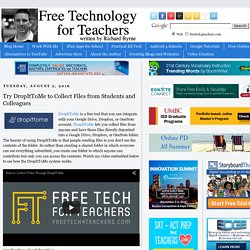 DropItToMe lets you collect files from anyone and have those files directly deposited into a Google Drive, Dropbox, or OneNote folder. The beauty of using DropItToMe is that people sending files to you don't see the contents of the folder. So rather than creating a shared folder in which everyone can see everything submitted, you create one folder to which anyone can contribute but only you can access the contents. Watch my video embedded below to see how the DropItToMe system works. GETTING STARTED – Evernote Help. Google EDU Releases Expeditions and ‘Cast for Education’ Apps, Introduces Quizzes to Google Forms. Google Classroom currently has more than 10 million active student users, according to Jonathan Rochelle of the Google EDU team—which means that one in six classrooms in the United States use it, he says. 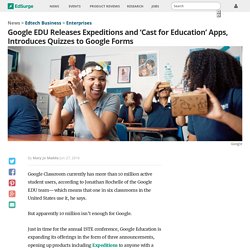 But apparently 10 million isn’t enough for Google. Just in time for the annual ISTE conference, Google Education is expanding its offerings in the form of three announcements, opening up products including Expeditions to anyone with a device and an interest in learning. Curious about virtual reality? Frustrated with how limiting your classroom projector is? Read below. The Genealogy and History of Popular Music Genres.

To begin our journey through the world of popular music, we must first answer the question: “What exactly defines popular music?” 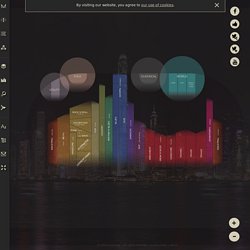 Despite popular belief that this is a highly subjective matter, a broad consensus has been reached of its definition. Etymologically speaking, “music of the people (=populos)”, would not make us much wiser. The encyclopedic definition (Encyclopædia Britannica) states: “any commercially oriented music principally intended to be received and appreciated by a wide audience, generally in literate, technologically advanced societies dominated by urban culture.” Meaning that the right way to interpret the term, is music which finds the most appeal of all large music groups, due to its commercial nature.

Indeed, there is in fact quite a large gap in record sales, concerts, downloads, and popularity in general between the group of popular music and so-called non-popular music. Why App Smash? Inspired by the last #1to1iPadChat , I thought it was time to post on the world craze that is App Smashing. The term App Smash was coined by the great Greg Kulowiec (@gregkulowiec) from EdTech Teacher fame. It is a hot topic in EdTech and obviously has its own Hashtag – #AppSmash. What is an App Smash? Content created in one app transferred to and enhanced by a second app and sometimes third.

Preferably the final product is then published to the web – remember, digital presence is the new résumé (CV). How to Manage the 4 Types of Teachers You Meet in Professional Development. In my heart, I will always be a middle school English Language Arts teacher. 8 digital skills we must teach our children. What a Decade of Education Research Tells Us About Technology in the Hands of Underserved Students. Edtech and Elearning 2016: Top 200 Influencers and Brands. Education is the doorway to the future, and we have a shared goal to create a better future for our children by providing them with the best education now, so they will have the best opportunities to succeed when they are older. In order to do this we must provide our teachers with the most up to date resources they need to succeed and make our schools more competitive. Funding for edtech companies is booming. From 2010 to 2014 we saw more than a 503% growth in investment, and the first half of 2015 saw $2.5 billion of private investment in edtech companies.

Music Specific Technology and Apps for the Classroom

Stencyl: Make iPhone, iPad, Android & Flash Games without code. Games: Play & Create. Hands-On Apps for Diverse Learners. Using games to teach can increase student engagement and add meaning to learning. Hands-on apps give children the ability to mix tactile play with a digital experience. Help and Support Center <! LittleBits Official Store. Swivl. 15 Uses for the Swivl. 7 Awesome Education Podcasts You Should Know About. Digital Storytelling on Blendspace. Encyclopedia Smithsonian. Encyclopedia of Earth. Socrative Space Race - Socrative Space Race.pdf. How to Screencast Your iPad. Last week’s Practical Ed Tech Tip of the Week was about how to create a video of your Android phone or tablet’s screen.