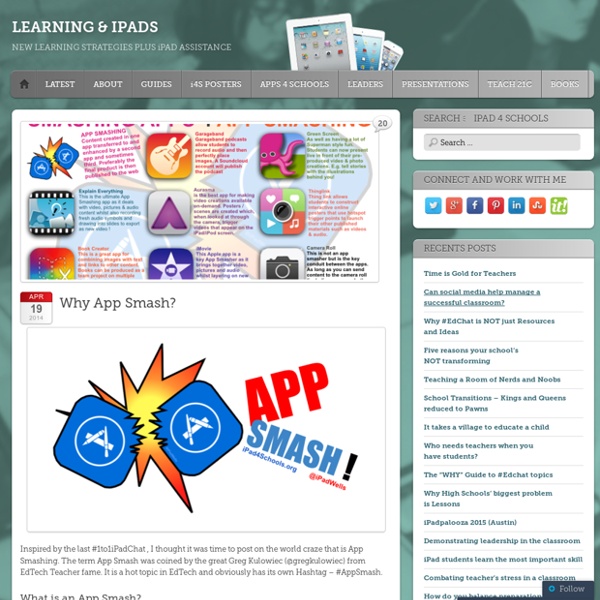 Inspired by the last #1to1iPadChat , I thought it was time to post on the world craze that is App Smashing. The term App Smash was coined by the great Greg Kulowiec (@gregkulowiec) from EdTech Teacher fame. It is a hot topic in EdTech and obviously has its own Hashtag – #AppSmash. What is an App Smash? Content created in one app transferred to and enhanced by a second app and sometimes third. Preferably the final product is then published to the web – remember, digital presence is the new résumé (CV). Reasons to App Smash: It demands creative thinkingIt demands more from the technology (value for money)It turns the issue of not having a ‘wonder app’ into a positiveIt removes any restrictions to take a topic as far as it can be taken.It often results in more engaging learning productsIt’s a fun challenge for ‘digital natives’ Key rules for successful App Smashing: Key Apps when App Smashing: Examples I’ve used: Watch me here chatting about App Smashing Final thought Other links: Like this: Related

48 Ultra-Cool Summer Sites for Kids and Teachers A good majority of northern hemisphere and international schools are winding down the 2011-2012 school year and doors will be closing as the students and teachers take off on their summer adventures. Here is a list of great sites for kids and teachers to keep you happily productive and learning this summer. These are in no way in any order of personal preference or coolness. Happy summer! 1. Magic Tree House Once Upon a Time … An Overview of the Children’s Book App Market – Guest Post by Julie Brannon This post originally appeared in the December 2011 edition of The Social Media Monthly. Author Julie Brannon is a marketing specialist with a focus on book apps. Readers of online newspapers are accustomed to finding interactive media interspersed with their daily reading which can now include videos, interactive graphs, social feedback and other enhancements. Publishers of digital books are beginning to experiment with mixing various media into their books as well. A great place to glimpse existing innovations that move toward this digital future is in iOS children’s book apps. Nosy Crow produces some of the most innovative children's book apps on the market by successfully integrating story with interactivity.

Lessons Learned - Four Months of being a 1:1 Just four months ago, my third graders and I embarked upon a journey of becoming a 1:1 Classroom! Excitement and anticipation filled the air as our iPads arrived on our 100th Day of School and Learning! Becoming a 1:1 classroom was a huge game-changer in my teaching career! Top Ten Lessons Learned Lesson 1 - Join Twitter The Genealogy and History of Popular Music Genres To begin our journey through the world of popular music, we must first answer the question: “What exactly defines popular music?” Despite popular belief that this is a highly subjective matter, a broad consensus has been reached of its definition. Etymologically speaking, “music of the people (=populos)”, would not make us much wiser.

Creating & App Smashing with App Dice I have to give all the credit for this awesome idea to Ryan Read. Ryan is an Integration Specialist in Illinois and boy does he have some great ideas! I ran across his #appdice idea while perusing my Twitter stream last Spring and was immediately intrigued. It's a simple way to get students to creating in your classroom and #appsmashing.

The Best App For Monitoring Students About a year ago, we decided after much input to open up YouTube Safe Search for students. While there can be a lot of mind-numbing videos about squirrels on jet-skis, there is also a large amount of instructional content on there. Want to learn how to do Photoshop? Or maybe just the right way to carve a turkey? 34 Smart Ideas For Using Smartphones In The Classroom 34 Ways Ideas For Smartphones In The Classroom By Category by John Hardison first appeared on gettingsmart.com In continuation of last week’s article, Part 1: 44 Better Ways to Use Smartphones in Class, here is a new list of thirty-six additional ideas to help leverage the power of these tech gadgets in the learning environment. In this blog post, I have attempted to avoid any redundancies. Please join me in helping educators everywhere creatively use smartphones by contributing any overlooked uses and supportive responses via this survey.

K-5 iPad Apps According to Bloom's Taxonomy An elementary library media specialist reviews iPad apps as they map to an updated version of Bloom's Taxonomy in this six-part series. Diane Darrow is an artist, Reading Recovery teacher, and library media specialist at Bel Aire Elementary in Tiburon, CA. You can follow her on Twitter at @dianedarrow. Google EDU Releases Expeditions and ‘Cast for Education’ Apps, Introduces Quizzes to Google Forms Google Classroom currently has more than 10 million active student users, according to Jonathan Rochelle of the Google EDU team—which means that one in six classrooms in the United States use it, he says. But apparently 10 million isn’t enough for Google. Just in time for the annual ISTE conference, Google Education is expanding its offerings in the form of three announcements, opening up products including Expeditions to anyone with a device and an interest in learning. Curious about virtual reality? Frustrated with how limiting your classroom projector is?

App Smash I sent a App Smash challenge on my Twitter Feed Earlier today. I used the Apps: Plickers, Chirp and Nearpod. What’s great they they work on any system. Exploring Non-Fiction Text Structures Using iPads Happy February! Hope everyone is having a great start to 2014! Since the holidays, my days have been filled with winter benchmark assessments, report cards, parent conferences, building data days, schedule changes, oh… and teaching! :) Needless to say, I’m beyond ready for our school break coming up next week. Anyway, I’ve been meaning to post this, and I finally found a few minutes to share! Throughout the year, I’ve been trying to find ways to integrate my set of iPads into my small intervention groups. Note-Taking with iPads I vividly remember how I first learned to take notes. My sixth grade geography teacher lectured in outline style: "Roman Numeral one - China. A - Qin Dynasty. 1 - Rulers . . . " We wrote down precisely what he said, and to this day, I still take notes in outline form. However, consider Sunni Brown's TED Talk, "Doodlers Unite." She argues that engaging in sketching while listening to complex ideas further supports learning. While outlining may work for me, what about those who value taking notes in the margins?

Related:
Related:  Digital Storytelling   -  iPads in the Classroom   -  Skola   -  Classroom Ideas   -  App Tech   -  iPad apps   -  Educational Technology and Useful Apps   -  App Smashing Tools   -  How To Setup Parental Controls (Restrictions) on the iPad | iPad Insight   -  Bloom's Taxonomy for The iPad ~ Educational Technology and Mobile Learning   -  The Top Educational iPad Apps Every Teacher and Student should Know about ( 100+)   -  What We Learned: A 1:1 iPad Reflection   -  What The iPad Has Done To Education -   -  15 Offline Activities with an iPad   -  iPads in schools! They just play games! |  IPAD 4 SCHOOLS   -  The Answer Pad – An ideal tool for engaging students in a flipped or blended learning classroom.   -  23 best iPad art apps for painting and sketching   -  inClass on the App Store on iTunes   -  Pair Activities With the iPad   -  The Single Most Important Factor for iPad Success in Schools — Learning in Hand   -  Virtual Manipulatives! on the App Store   -  A list of All The Best iPad Apps Teachers Need   -  15 iPad Skills Every Teacher and Student should Have   -  Free Internet Safety Tutorial at GCFLearnFree   -  Adobe Reader on the App Store on iTunes   -  MindMeister (mind mapping) on the App Store   -  One iPad in the classroom   -  Creating on iPads   -  iPad uses in the classroom - Google Présentations   -  Teaching with Aurasma - YouTube   -  padagogy-wheel.jpg (JPEG Image, 1829 × 1829 pixels) - Scaled (54%)   -  Leading the Smart Video Revolution   -  A Practical Guide For Teachers Who Just Got iPads | Edudemic   -  iPads in Education   -  Top Ten: Apps for children with special educational needs | Tutorhub Blog   -  6 Ready To Go iPad Centers   -  The Teacher's Guide To The One iPad Classroom - Edudemic   -  102 Interesting Ways to use an iPad in the Classroom - Google Slides   -  The 4 Apps Needed To Run A One iPad Classroom - Edudemic   -  Apps For Children with Special Needs | APP reviews on the iPad for Autism, Special Needs, ADHD, Epilepsy, Education ++++   -  Student workflow on iPad in your lessons - Mark Anderson's Blog