Measuring the Success of Your PR Campaign. 3 Wondertacular Rules for Going Viral From The Most Viral Site on the Web. This morning Upworthy.com, which crested at 30 million unique visitors in May thanks to a runaway viral hit, announced that they've started piloting sponsored posts to generate revenue, and shared with Fast Company a bit of their secret sauce. 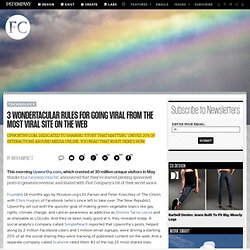 Founded 14 months ago by Moveon.org's Eli Pariser and Peter Koechley of The Onion, with Chris Hughes of Facebook (who's since left to take over The New Republic), Upworthy set out with the quixotic goal of making green-vegetable topics like gay rights, climate change, and cancer awareness as addictive as Doritos Tacos Locos and as shareable as LOLcats. Research: The Emotions that Make Marketing Campaigns Go Viral - Kelsey Libert , and Kristin Tynski. We’re all well aware of the fact that marketing is shifting from a landscape where marketers can utilize mass media to speak at consumers, to one where marketers are simply part of the crowd themselves. 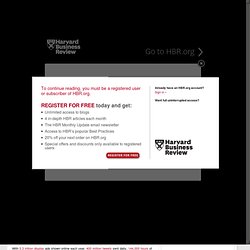 The bullhorn of radio, television, print and other one-way interruptive marketing approaches are quickly losing efficacy. So how do you get your brand noticed? A recent article by Mitch Joel argues that brands must publish more content, that the old standbys of frequency and repetition that worked so well in decades past are still worthwhile today. Truth be told, he’s right. Publishing more content, even if the content isn’t viral or noteworthy, can be a great way to maintain or even grow existing large audiences. But what if your brand or company doesn’t have an active audience of avid content consumers already? What Can Viral Marketing Actually Do?

Break through the noise. Five things about social media success. 10 social media tips from Internet Week you can use immediately. This post is by Heidi Cohen, principal of Riverside Marketing Strategies. 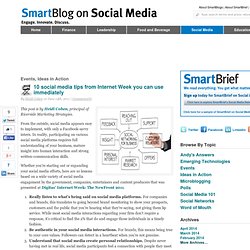 From the outside, social media appears easy to implement, with only a Facebook-savvy intern. In reality, participating on various social media platforms requires full understanding of your business, mature insight into human interaction and strong written-communication skills. Whether you’re starting out or expanding your social media efforts, here are 10 lessons based on a wide variety of social media engagement by the government, companies, entertainers and content producers that was presented at Digitas’ Internet Week: The NewFront 2011. The Rules of Social Media. Steps to Social Media News Release Success. As recent studies show, more journalists than ever are using social media to source, research and write their stories. 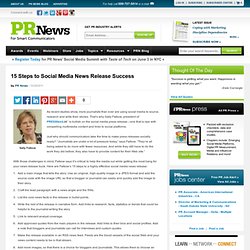 That’s why Sally Falkow, president of PRESSfeed,â€¨ is bullish on the social media press release—one that is ripe with compelling multimedia content and links to social platforms. Just why should communicators take the time to make press releases socially ready? “Journalists are under a lot of pressure today,” says Falkow. “They’re all being asked to do more with fewer resources. And while they still have to do the work they did before, they also have to provide content for their Web site.” With those challenges in mind, Falkow says it’s critical to help the media out while getting the most bang for your news release buck. Add a main image that tells the story. 5 stages of humanization for a social business.

There is no one-size-fits-all playbook for engaging and responding in real-time business. 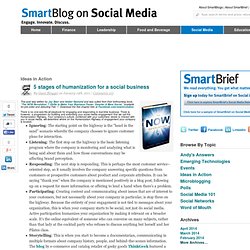 There is, however, a progression for building and extending your social media engagement that we call the Humanization Highway. Your company’s culture, combined with your customers’ desire to interact with you in social media, will determine where on the Humanization Highway of engagement your company is located. Ignoring: The starting point on the highway is the “head in the sand” scenario whereby the company chooses to ignore customer pleas for interaction.Listening: The first stop on the highway is the basic listening program where the company is monitoring and analyzing what is being said about them and how those conversations may be affecting brand perception.Responding: The next stop is responding.

10 Ways to Humanize Your Brand on Social Media. Joe Chernov is the VP of Content Marketing for Eloqua. 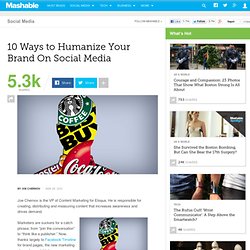 Live from #SXSW: 3 keys to winning over the Web. Revisiting The Meaning Of "Engagement" In 2007, Forrester called "Engagement" marketing's new key metric. 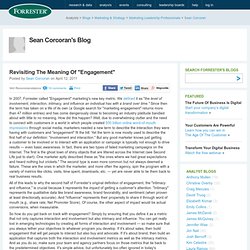 We defined it as "the level of involvement, interaction, intimacy, and influence an individual has with a brand over time. " Since then the term has taken on a life of its own (a Google search for "marketing engagement" returns more than 47 million entries) and has come dangerously close to becoming an industry platitude bandied about with little to no meaning.

How did this happen? Well, due to overwhelming clutter and the need to connect with customers in a world in which people created 500 billion online word-of-mouth impressions through social media, marketers needed a new term to describe the interaction they were having with customers and "engagement" fit the bill. Yet the term is now mostly used to describe the first half of our definition: "involvement and interaction. " The First Step In Creating A Social Media Content Strategy. A question that new users of social media often ask is, “I hear that content is king, but what kind of content should I be producing?” 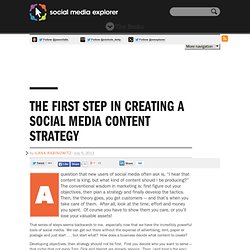 The conventional wisdom in marketing is: first figure out your objectives, then plan a strategy and finally develop the tactics. Then, the theory goes, you get customers — and that’s when you take care of them. After all, look at the time, effort and money you spent. Of course you have to show them you care, or you’ll lose your valuable assets! That series of steps seems backwards to me, especially now that we have the incredibly powerful tools of social media. Developing objectives, then strategy should not be first. Care about your community. Image via Wikipedia Caring about the community you hope to reach, having them in your heart and in your mind with every word you write, every offer you make, every new product you develop–that has to be step one. Starting from the inside out guides all your decisions. 7 questions every social media strategy must be able to answer. It’s easy to get distracted by trivial social media arguments. 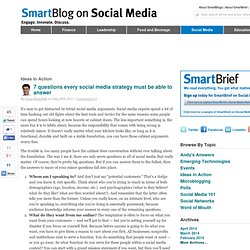 Social media experts spend a lot of time hashing out old fights about the best tools and tactics for the same reasons some people can spend hours looking at new faucets or cabinet doors. The less important something is, the more fun it is to kibitz about, because the responsibility that comes with being wrong is relatively minor. It doesn’t really matter what your kitchen looks like; so long as it is functional, durable and built on a stable foundation, you can have those cabinet arguments worry-free.

The trouble is, too many people have the cabinet door conversation without ever talking about the foundation. What's Your Social Media Strategy? A global bank executive recently described to us a challenge for our times. 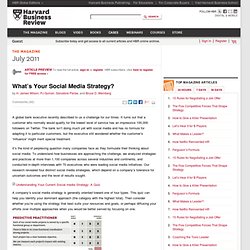 It turns out that a customer who normally would qualify for the lowest level of service has an impressive 100,000 followers on Twitter. The bank isn’t doing much yet with social media and has no formula for adapting it to particular customers, but the executive still wondered whether the customer’s “influence” might merit special treatment. It’s the kind of perplexing question many companies face as they formulate their thinking about social media. To understand how businesses are approaching the challenge, we analyzed strategies and practices at more than 1,100 companies across several industries and continents, and conducted in-depth interviews with 70 executives who were leading social media initiatives. Integrating Content, Social, and Search. Stop Talking About Social and Do It - Nilofer Merchant. Using Social Media to Be a Better Leader. Sparks Content Marketing Advice.