Clinton Speaks on Internet Freedom. Hope springs e-ternal. When, on a 2009 trip to China, Barack Obama proclaimed that “the more freely information flows, the stronger the society,” he was only echoing Ronald Reagan’s pronouncement (made in 1989) that “information is the oxygen of the modern age.” 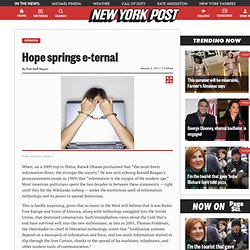 Most American politicians spent the two decades in between these statements — right until they hit the WikiLeaks iceberg — under the mysterious spell of information technology and its power to spread democracy. This is hardly surprising, given that so many in the West still believe that it was Radio Free Europe and Voice of America, along with technology smuggled into the Soviet Union, that destroyed communism. However, such cyber-utopianism alone cannot explain the wild enthusiasm with which America’s ruling elites greeted the arrival of the Internet. Their other crucial assumption was, and, to a certain degree, still is, that the whole of humanity shares a democracy gene. In China, Internet surveillance has already become a profitable industry. Did the fax machine cause the Tunisian uprising? Sounds unlikely. 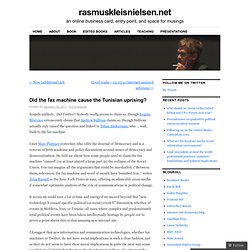 Did Twitter? Nobody really seems to claim so, though Evgeny Morozov erroneously claims that Andrew Sullivan claims so, though Sullivan actually only raised the question and linked to Ethan Zuckerman, who … wait, back to the fax machine. I met Marc Plattner yesterday, who edits the Journal of Democracy and is a veteran of both academic and policy discussions around issues of democracy and democratization. He told me about how some people used to claim the fax machine “caused” (or at least played a large part in) the collapse of the Soviet Union. You can imagine all the arguments that could be marshalled. But that new information and communications technologies aren’t all-powerful or irrelevant doesn’t mean that they do not matter–or that their sometimes exaggerated positive sides actually distract us from recognizing their more nefarious aspects, as people like Morozov sometimes come close to arguing, as pointed out by Zeynep Tufekci in her thoughtful review of his book. 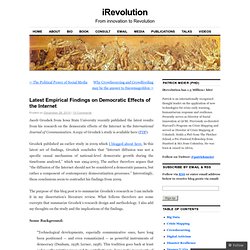 A copy of Groshek’s study is available here (PDF). Groshek published an earlier study in 2009 which I blogged about here. In this latest set of findings, Groshek concludes that “Internet diffusion was not a specific causal mechanism of national-level democratic growth during the timeframe analyzed,” which was 1994-2003. The author therefore argues that “the diffusion of the Internet should not be considered a democratic panacea, but rather a component of contemporary democratization processes.” Interestingly, these conclusions seem to contradict his findings from 2009.

The purpose of this blog post is to summarize Groshek’s research so I can include it in my dissertation’s literature review. Some Background: The Methodology: The Results: What about Croatia, Indonesia and Mexico? In Conclusion: Like this: Too Early to Discount Internet’s Democratizing Effects. There is little empirical research on the effects of digital technology on politics, so the article on the democratic effects of the Internet in the International Journal of Communication by Iowa State University’s Jacob Groshek is a welcome addition to the field, though Groshek’s conclusions may be premature. 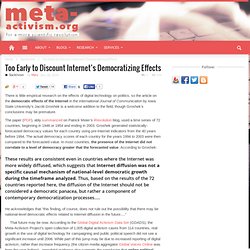 The paper (PDF), ably summarized on Patrick Meier’s iRevolution blog, used a time series of 72 countries, beginning in 1946 or 1954 and ending in 2003. Groshek generated statistically-forecasted democracy values for each country using pre-Internet indicators from the 40 years before 1994.

The road to Tahrir - The Egyptian Example. While the uprising in Egypt caught most observers of the Middle East off guard, it did not come out of the blue. 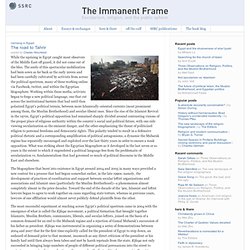 The seeds of this spectacular mobilization had been sown as far back as the early 2000s and had been carefully cultivated by activists from across the political spectrum, many of these working online via Facebook, twitter, and within the Egyptian blogosphere. Working within these media, activists began to forge a new political language, one that cut across the institutional barriers that had until then polarized Egypt’s political terrain, between more Islamically-oriented currents (most prominent among them, the Muslim Brotherhood) and secular-liberal ones.

One event highlighted the political potential of blogging in Egypt and helped secure the practice’s new and expanding role within Egyptian political life. It had long been known that the Egyptian state routinely abused and tortured prisoners or detainees (hence the U.S.’s choice of Egypt in so-called rendition cases).