The Past and Future of IR and Security: Where We're Going. Big talk may characterize the promises of this century’s burgeoning “big data” transformation, but in the world of foreign policy an altogether quieter revolution is taking place in the growing sub-field of futures studies. 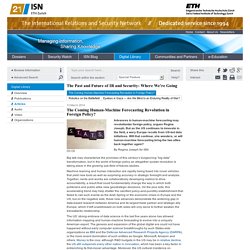 Machine learning and human interaction are rapidly being fused into novel vehicles that yield new tools as well as surprising accuracy in strategic foresight and analysis. Together, nerds and wonks are collaboratively developing metrics to drive accountability, a result that could fundamentally change the way in which both politicians and public alike view geostrategic decisions. The US’ strong embrace of data science in the last five years alone has allowed information mapping and human-machine forecasting to evolve into a uniquely American export. The most visible proponents of the revolution in information science and new human-machine methodologies, while American, have global reputations. 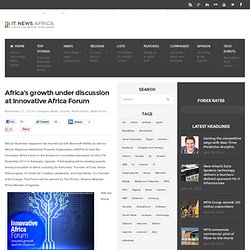 Participating will be leading experts driving innovation in Africa including Su Kahumbu, Founder of iCow, Simon Rweyongoza, of Center for Creative Leadership, and Kyai Mullei, Co-Founder of M-Changa. The Forum will be opened by The Rt Hon. Amama Mbabazi, Prime Minister of Uganda. Innovative Africa – Uganda Conference. (Image source: ic-events.net) With the theme “towards growth and development” the roundtable will explore how to create a conducive environment and an ecosystem for innovations in Africa. Omar Ben Yedder, publisher of African Business magazine, stated: “The role of innovation in Africa is an important discussion that is being had across several channels.

3-D Printing Will Change the World. To anyone who hasn’t seen it demonstrated, 3-D printing sounds futuristic—like the meals that materialized in the Jetsons’ oven at the touch of a keypad. 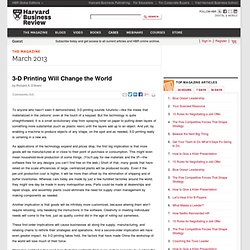 But the technology is quite straightforward: It is a small evolutionary step from spraying toner on paper to putting down layers of something more substantial (such as plastic resin) until the layers add up to an object. And yet, by enabling a machine to produce objects of any shape, on the spot and as needed, 3-D printing really is ushering in a new era. As applications of the technology expand and prices drop, the first big implication is that more goods will be manufactured at or close to their point of purchase or consumption. This might even mean household-level production of some things.

(You’ll pay for raw materials and the IP—the software files for any designs you can’t find free on the web.) China won’t be a loser in the new era, but it will have to give up on being the world’s manufacturing powerhouse. Microsoft to invest $75-million for African digital access. During the closing keynote of Microsoft’s Partners in Learning Global Forum over the weekend, the technology giant announced that it has started an initiative and partnership called Youth Spark – Spark a Child’s digital future. 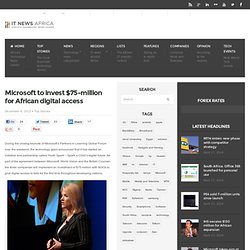 As part of the agreement between Microsoft, World Vision and the British Counsel, the three companies will implement an investment of $75-million with NGOs to give digital access to kids for the first time throughout developing nations. Laura Ipsen, corporate vice president of Microsoft’s Worldwide Public Sector, during the closing keynote of Microsoft’s Partners in Learning Global Forum (image: Charlie Fripp) Microsoft mentioned that they have already opened over a 100 digital hubs in Africa, where they train people on how to use digital content.

While they had a massive reach with the digital hubs, those were done with only $2-million of investment. Owens explained that “once a child’s basic needs are met, developing digital skills leads to better jobs. Benefits for Africa in the pipeline – Telkom. Perhaps the request for comment about where they stand with the general public is unfair, and senior management from Telkom is understandably reluctant to speculate. 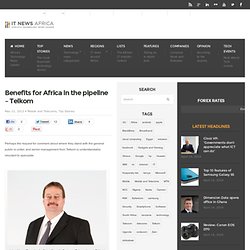