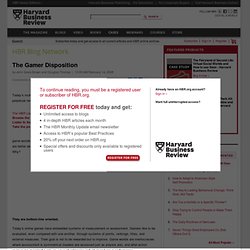 Their perpetual newness is what makes them enticing to players. Each generation of games begets a new generation of participants who develop what we call the gamer disposition. GitHub for Education, Revisited. A GitHub for Education, Revisited I’ve written several times in the past about the potential for a “GitHub for education” – that is, a version of the popular social coding network GitHub where the “code” that’s shared is openly-licensed educational content. That could include OER in any digital format – text, code, video, audio, photos – and any edu-related genre – course readings, handouts, syllabi, exams, assignments. There’s actually nothing to stop folks from using GitHub for educational purposes already, of course. See: Lincoln Mullen’s post on ProfHacker on using GitHub to “fork” a syllabus. See also: Wired’s “meta-story” of how it published on its article on GitHub on GitHub. After all, GitHub has in place the technological mechanisms to handle version control, file management, and collaboration not just for code but for text. 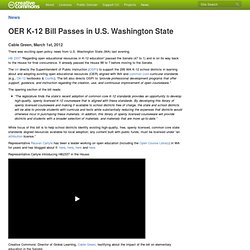 Washington State (WA) last evening. HB 2337 “Regarding open educational resources in K-12 education” passed the Senate (47 to 1) and is on its way back to the House for final concurrence. It already passed the House 88 to 7 before moving to the Senate. The bill directs the Superintendent of Public Instruction (OSPI) to support the 295 WA K-12 school districts in learning about and adopting existing open educational resources (OER) aligned with WA and common core curricular standards (e.g., CK-12 textbooks & Curriki). The opening section of the bill reads: “The legislature finds the state’s recent adoption of common core K-12 standards provides an opportunity to develop high-quality, openly licensed K-12 courseware that is aligned with these standards.

Representative Carlyle introducing HB2337 in the House: WA is poised to follow the good work of Utah, Brazil, and so many others who have gone before. Teach with Portals » About. About The Teach with Portals program offers free content, information and tools to help educators build innovative curricula. 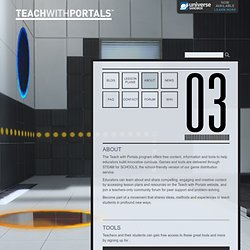 Games and tools are delivered through STEAM for SCHOOLS, the school-friendly version of our game distribution service. Educators can learn about and share compelling, engaging and creative content by accessing lesson plans and resources on the Teach with Portals website, and join a teachers-only community forum for peer support and problem-solving. Become part of a movement that shares ideas, methods and experiences to teach students in profound new ways. Envisioning-the-future-of-education.png (1600×2263) Hack Education. 2012 Paris OER Declaration. Ms. 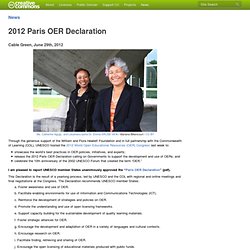 Catherine Ngugi.. and Letuimanu’asina Dr. Emma KRUSE VA’AI / Mariana Bittencourt / CC BY Through the generous support of the William and Flora Hewlett Foundation and in full partnership with the Commonwealth of Learning (COL), UNESCO hosted the 2012 World Open Educational Resources (OER) Congress last week to: showcase the world’s best practices in OER policies, initiatives, and experts;release the 2012 Paris OER Declaration calling on Governments to support the development and use of OERs; andcelebrate the 10th anniversary of the 2002 UNESCO Forum that created the term “OER.”

I am pleased to report UNESCO member States unanimously approved the “Paris OER Declaration” (pdf). This Declaration is the result of a yearlong process, led by UNESCO and the COL with regional and online meetings and final negotiations at the Congress. A. B. C. D. E. F. G. H. I. J. Open as in door or open as in heart? #mooc. A note on the end of Steve Carson’s post about MOOCs and the liberal arts prompted a brief conversation about the two different meanings of “MOOC” with Brandon Muramatsu.

Steve’s original post drew (based on his conversation with Brandon) a distinction between the Edx/Coursera/Udacity “MOOCs” and the Change11/ds106/wileyMOOC “MOOCs” – he suggested using MOCs as a description of the former (as they are not, in the strictest sense, open). But Brandon felt, on reflection, that the real distinction concerned how massive the courses were. As a primer for those of you who read this but don’t live it (you lucky people!) MOOC stands for “Massively Open Online Course”, basically a big global chunk of online learning that doesn’t cost you (the learner) any money.

It’s the big noise in university-level education as it’s got that game-changing disruptive innovation feel about it right now. So – for your first version above you could see something like: Some courses are open as in door. Duplication theory of educational value. Higher education faces a value crisis. 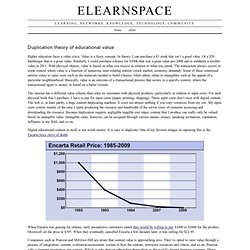 Value is a fuzzy concept. In theory, I can purchase a $3 steak that isn’t a good value. Wanna Work Together?