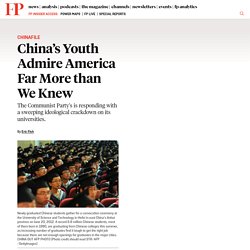 Speaking at a conference on ideology and politics in China’s colleges, he stressed that schools must uphold the Chinese Communist Party’s leadership and “guide the broad masses of teachers and students to be strong believers” in Marxist theories and socialist core values. The conference had the highest profile attendee roster of any education event in recent memory: top university officials, representatives from the country’s military and propaganda apparatuses, and four of the seven members of the all-powerful Politburo Standing Committee. In case Xi’s speech left any doubt as to the meeting’s purpose, China’s education minister explained it in an article the following day. “Schools,” he wrote, “are the prime targets for the infiltration of hostile forces.” Emily Esfahani Smith: There's more to life than being happy.

Inside the Manconomy, the Industry Selling a New Kind of Masculinity. There are a lot of commercials and celebrities and “celebrities” and books and hashtags and approximately 73 podcasts and at least one Bagel Bites campaign telling us how to be better fathers, husbands, friends, and colleagues. 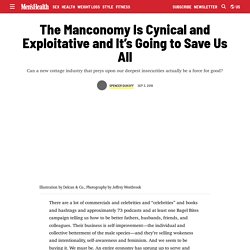 Their business is self-improvement—the individual and collective betterment of the male species—and they’re selling wokeness and intentionality, self-awareness and feminism. And we seem to be buying it. We must be. An entire economy has sprung up to serve and exploit the desire of men to be better people: better dads and brothers and spouses and coworkers. This is, on some basic level, a welcome thing.