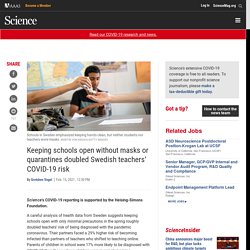 A careful analysis of health data from Sweden suggests keeping schools open with only minimal precautions in the spring roughly doubled teachers’ risk of being diagnosed with the pandemic coronavirus. Their partners faced a 29% higher risk of becoming infected than partners of teachers who shifted to teaching online. Ny rapport avslöjar friskolornas glädjebetyg: Upprörande. Av: Jonathan Jeppsson. 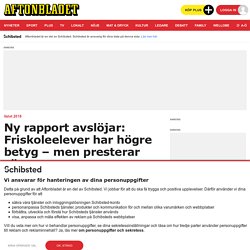 Multiple Intelligences Theory: Widely Used, Yet Misunderstood. When Howard Gardner introduced his multiple intelligences theory 35 years ago, it was a revolutionary idea that challenged long-cherished beliefs. 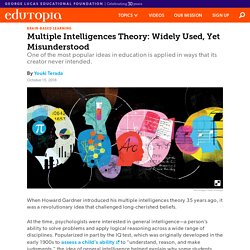 At the time, psychologists were interested in general intelligence—a person’s ability to solve problems and apply logical reasoning across a wide range of disciplines. Popularized in part by the IQ test, which was originally developed in the early 1900s to assess a child’s ability to “understand, reason, and make judgments,” the idea of general intelligence helped explain why some students seemed to excel at many subjects.  Thinking in Time: Cognition, Communication and Learning (CCL) : Lunds Universitet. Don't throw away your printed books: A meta-analysis on the effects of reading media on reading comprehension. Introduction There has been a gradual shift from paper-based reading to reading on digital devices, such as computers, tablets, and cell-phones. Although there are clear advantages of digital-based assessment and learning, including reduced costs and increased individualization, research indicates that there may be disadvantages as well, as described below. In addition, findings from previous reviews of studies on the effects of digital reading on comprehension have been inconclusive (Dillon, 1992; Kingston, 2008; Noyes & Garland, 2008; Singer & Alexander, 2017b; Wang, Jiao, Young, Brooks, & Olson, 2007). The current paper presents a meta-analysis of recent studies that investigated the effects of paper versus digital media on reading comprehension. Search 700 reasons. Engelskan dämpar lusten att lära ytterligare språk - Göteborgs universitet. Nyhet: 2012-03-14. 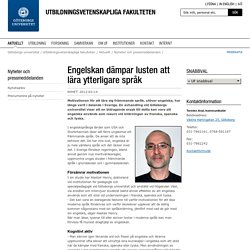 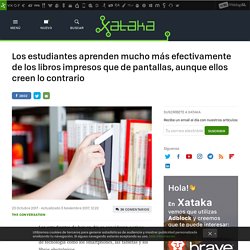 The fields of psychology and education were revolutionized 30 years ago when the now world-renowned psychologist Howard Gardner published his 1983 book Frames of Mind: The Theory of Multiple Intelligences,” which detailed a new model of human intelligence that went beyond the traditional view that there was a single kind that could be measured by standardized tests. 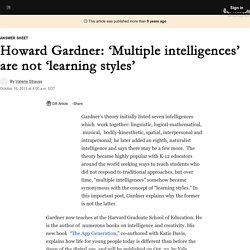 (You can read his account of how he came up with the theory here.) Gardner’s theory initially listed seven intelligences which work together: linguistic, logical-mathematical, musical, bodily-kinesthetic, spatial, interpersonal and intrapersonal; he later added an eighth, naturalist intelligence and says there may be a few more. The theory became highly popular with K-12 educators around the world seeking ways to reach students who did not respond to traditional approaches, but over time, “multiple intelligences” somehow became synonymous with the concept of “learning styles.” HOW TO ENGAGE IN PSEUDOSCIENCE WITH REAL DATA: A CRITICISM OF JOHN HATTIE’S ARGUMENTS IN VISIBLE LEARNING FROM THE PERSPECTIVE OF A STATISTICIAN. 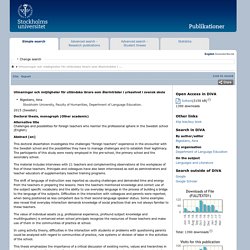 Pedagogical Knowledge and the Changing Nature of the Teaching Profession. 26 Research-Based Tips You Can Use in the Classroom Tomorrow. With so many classroom research studies published daily, you can be forgiven for missing some. 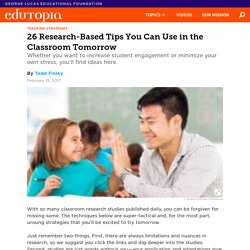 The techniques below are super-tactical and, for the most part, unsung strategies that you’ll be excited to try tomorrow. Just remember two things. First, there are always limitations and nuances in research, so we suggest you click the links and dig deeper into the studies. Studying With Quizzes Helps Make Sure the Material Sticks. By Samara Freemark, American RadioWorks Roddy Roediger is a psychology professor at Washington University in St. 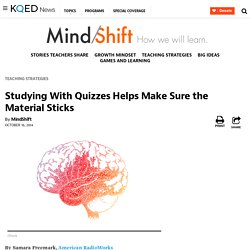 Louis and runs the school’s Memory Lab. He’s been obsessed with studying how and why people remember things for four decades. About 20 years ago, Roediger was running an experiment on how images help people remember. He separated his subjects into three groups and asked each group to try to memorize 60 pictures. Pb class size. Scientists say Google is changing our brains. Back in the pre-internet days, if someone asked you a tricky question, you had a couple of options. You could see if anyone you knew had the answer. You could pull out an encyclopedia. Or you could head down to the library to carry out research. Whichever one you opted for, it was almost certainly more complicated and time-consuming than what you’d do today: Google it. Thanks to technology – and the internet in particular – we no longer need to depend on our sometimes unreliable memories for random facts and pieces of information.

But with all the knowledge we could ever need at our fingertips, are we outsourcing our memory to the internet? Our virtual brain We are indeed, according to recent research. In the study, two groups of people were asked to answer a set of trivia questions. Harnessing the Incredible Learning Potential of the Adolescent Brain. It has become a cultural cliché that raising adolescents is the most difficult part of parenting. It’s common to joke that when kids are in their teens they are sullen, uncommunicative, more interested in their phones than in their parents and generally hard to take. But this negative trope about adolescents misses the incredible opportunity to positively shape a kid’s brain and future life course during this period of development. Kirschner sweller clark why minimal instruction doesnt work. "Bra" summativa prov främjar lärandet. Barns hjärnor kan påverkas med rätt träning DN. "Bra" summativa prov främjar lärandet. New study could be another nail in the coffin for the validity of student evaluations of teaching.

A number of studies suggest that student evaluations of teaching are unreliable due to various kinds of biases against instructors. (Here’s one addressing gender.) Yet conventional wisdom remains that students learn best from highly rated instructors; tenure cases have even hinged on it. What if the data backing up conventional wisdom were off? A new study suggests that past analyses linking student achievement to high student teaching evaluation ratings are flawed, a mere “artifact of small sample sized studies and publication bias.” “Whereas the small sample sized studies showed large and moderate correlation, the large sample sized studies showed no or only minimal correlation between [student evaluations of teaching, or SET] ratings and learning,” reads the study, in press with Studies in Educational Evaluation. Delaying kindergarten until age 7 offers key benefits to kids — study.

A kindergartner uses a computer at a literacy station in class. (Jeff Morehead/Chronicle-Tribune) A new study finds strong evidence that delaying kindergarten by a year provides mental health benefits to children, allowing them to better self-regulate their attention and hyperactivity levels when they do start school. The study, titled “The Gift of Time? School Starting Age and Mental Health” and published this week by the National Bureau of Economic Research, found that these benefits — which are obviously important to student achievement — persist at least until age 11. Stanford Graduate School of Education Prof. Flexspan: Enkelt referenshanteringsverktyg - RefME. "Bra" summativa prov främjar lärandet.

Blog — Welcome to the Virtual Age. Casa Azul. All Events. Awareness Raising for Mongolian Youth through World Heritage Education: ‘Heritage in a Box’ Launching and Training Workshop As part of the initiative to raise awareness among Mongolian youths on heritage values through World Heritage Education, the ‘Heritage in a Box’ toolkit will be launched on 17 March 2016 at Mongolian National Modern Art Gallery, Ulaanbaatar. On 19-20 March 2016, 14 educators from provinces located around the Orkhon Valley Cultural Landscape World Heritage site will subsequently be trained on the utilization of the toolkit in Kharkhorin soum.The ‘Heritage in a Box’ toolkit is an interactive and portable resource kit designed for teachers and students between 3rd to 12th grades in Mongolia.