Labs.gupon.jp/bezier_decay/ Mograph Multishader Setup in Houdini. So if you run in the Mograph circles you most likely have come across the infamous random image to plane deal. 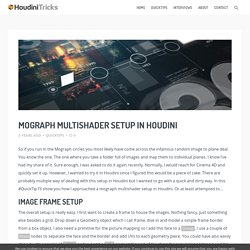 You know the one. The one where you take a folder full of images and map them to individual planes. I know I’ve had my share of it. Sure enough, I was asked to do it again recently. Normally, I would reach for Cinema 4D and quickly set it up. Image Frame Setup The overall setup is really easy. Scattering Points Now with the frame geometry ready, I want to create another network for the points the planes are going to be copied on to. Merging Our Geometry The next thing I need to do is merge both networks together. In order to accomplish the merging of objects, you use the Object Merge SOP.

Now for the mograph-like part. Image Setup So here comes the tricky part. Next thing to do is add a Material node right after the Copy to Points SOP. A Simple Random Texture Setup The first pass of getting the different images on to the geometry will be quick and easy. That’s it! Abstract Glow Dots - Houdini Particles. [Houdini Tutorial] 0029 Spectrum Visualizer (Slow version) A unified approach to grown structures. Hai Le on Vimeo. Spiro Toy Asset. Notations 21: 165 Musicians Visualize Sheet Music in Unusual Ways. By Maria Popova What the color wheel has to do with Beethoven and supporting arts education. 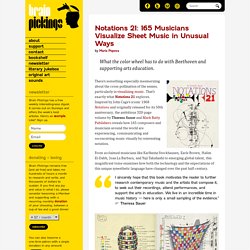 There’s something especially mesmerizing about the cross-pollination of the senses, particularly in visualizing music. That’s exactly what Notations 21 explores. Inspired by John Cage’s iconic 1968 Notations and originally released for its 50th anniversary, the ambitious 320-page volume by Theresa Sauer and Mark Batty Publishers reveals how 165 composers and musicians around the world are experiencing, communicating and reconceiving music visually by reinventing notation. From acclaimed musicians like Karlheinz Stockhausen, Earle Brown, Halim El-Dabh, Joan La Barbara, and Yuji Takahashi to emerging global talent, this magnificent tome examines how both the technology and the expectations of this unique synesthetic language have changed over the past half-century. 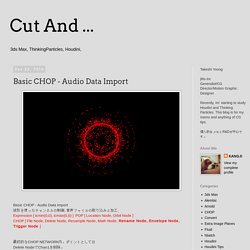 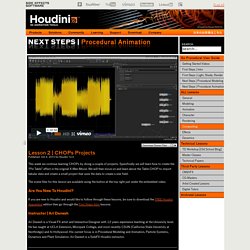 Specifically we will learn how to create the “Pin Table” effect in the original X-Men Movie. We will then move on and learn about the Table CHOP to import tabular data and create a small project that uses the data to create a star field. The scene files for this lesson are available using the button at the top right just under the embedded video. Are you New to Houdini? If you are new to Houdini and would like to follow through these lessons, be sure to download the FREE Houdini Apprentice edition then go through the First Steps Intro lessons.

Instructor | Ari Danesh Ari Danesh is a Visual FX artist and Interactive Designer with 12 years experience teaching at the University level. OSCILLATE. SOUND / Generating Sound with Houdini. Above is how you might create a very simple SOUND in Houdini. 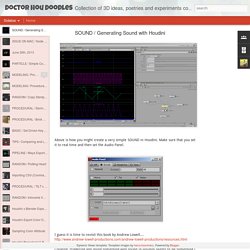 Make sure that you set it to real time and then set the Audio Panel. I guess it is time to revisit this book by Andrew Lowell.... Creating, triggering and doing something with sound in Houdini seems to be something I have to explore further. In one way, it feels like a huge detour from Houdini and VFX, but on the other hand, it is kind of a revelation as well. CHOPS and Music Driven Animation III. Procedural Animation. CHOPS and Music Driven Animation II. CHOPs Projects. Blog - YUJAEHO. Pyro Board: 2D Rubens' Tube! Houdini 3d Equalizer. Houdini Music Installation Art. Procedural Houdini Music Video. Procedural animation (Houdini CHOP) Motion trails in houdini, part 1 » Toadstorm Nerdblog.

I haven’t posted in a long time mostly because I’ve been spending the majority of the last month devouring Houdini tutorials on the internet. 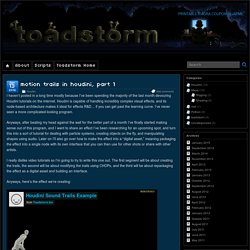 Houdini is capable of handling incredibly complex visual effects, and its node-based architecture makes it ideal for effects R&D… if you can get past the learning curve. I’ve never seen a more complicated-looking program. Anyways, after beating my head against the wall for the better part of a month I’ve finally started making sense out of this program, and I want to share an effect I’ve been researching for an upcoming spot, and turn this into a sort of tutorial for dealing with particle systems, creating objects on the fly, and manipulating shapes using audio.