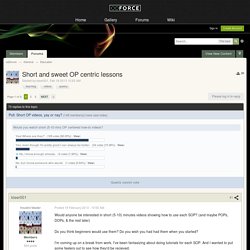 There's bits and pieces everywhere.. but most Tutorials center around an effect they want to achief. Is HQUEUE for Indie a production ready tool under windows ? - Lounge/General chat. Get rid of mushroom effect in explosion and add details in the opening. I've wanted to tackle mushroom caps in pyro sims for a while. 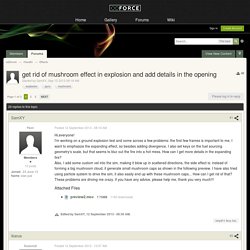 Might as well start here... Three things that contribute greatly to the mushroom caps: coarse sub-steps, temperature field and divergence field. All of these together will comb your velocity field pretty much straight out and up. Calling CVEX from VEX. 1. 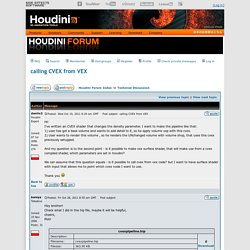 Generate millions particles at rendertime. Two ways: In SOPs you can use the Point Replicate SOP to take your tens or hundred of thousands of particles and turn it in to hundreds of thousands or tens of millions. 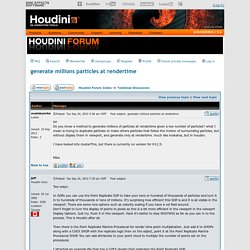 It's surprising how efficient this SOP is and it is all visible in the viewport. There are some nice options such as velocity scaling if you have a vel field around. Don't forget to turn the display of points to pixels as this is a bit more efficient in the viewport in the viewport Display Options. Just try. Generate millions particles at rendertime. Packed primitives material assignment. This is a complicated question. 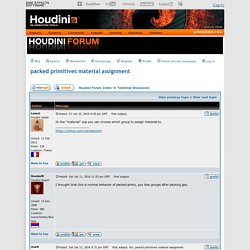 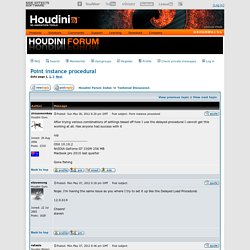 This can't be resolved unless you wrap multiple materials into one and switch between them using a primitive attribute on the instance. It might get quite unwieldy, however. Maybe string tuples in H12 (supported in GA, but not exposed in a SOP, so far) could save the day, but you'd still need some sort of mapping from tuple index to the target primitive material. One idea I came up with to solve this would be to add a new set of object-level Mantra properties, which at render time would act similar to detail attributes (but with a different priority, probably higher). Then the point instancer could copy any desired point attribute as a corresponding object-level property, with the same name and type. 3d mandelbrot primitive? - Modeling. Rain, Condensation droplets, Rivulets flowing over Hard Surface RnD - Work in Progress. Hi Netvudu, thanks! 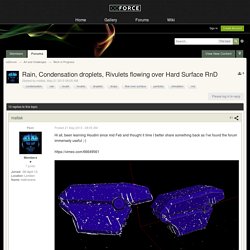 And yes, of course you are correct in that the main control is in the voppop. Initially I was going "right round the houses" trying all sorts including the creep SOP - a noob error I'm sure. So, the particles are split into 4 separate popnets based on the same initial voppop setup, some with trails added, some without, with varying degrees of randomised noise. Within the voppop with geometry is called up via an isoOffset/SDF volume. This volume has a triple purpose: Rain water drips. Rain water drips.

Retime simulations. I have attached a scene with all possible simulations and there notes if there is any error. 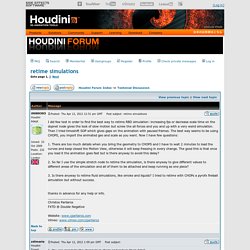 Seems that you can retime either using CHOPs or Timeblend+Timeshift SOPs any kind of simulation (RBD, particles, fluids) but with few exceptions. When auto-resized container is used by the fluid simulation there is a strobing, Jeff gave a solution to that above. When you retime FLIP fluids there also a jittering, zdimaria above gave the solution, the reseeding should be turned off. But when new geometry or points is enters the simulation over time, there is a problem. Here is the example I used above: I created a system for my project which generates debris from fractured geometry, the amount of debris changes over time, as more fracturing there is, more debris will born. All the above you can find them inside the attached hip. Point instance procedural. The pickle here is that you can only have *one* material override per point, hence only set one material on the target instance. 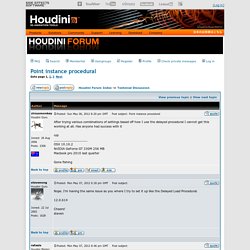 This can't be resolved unless you wrap multiple materials into one and switch between them using a primitive attribute on the instance. It might get quite unwieldy, however. Maybe string tuples in H12 (supported in GA, but not exposed in a SOP, so far) could save the day, but you'd still need some sort of mapping from tuple index to the target primitive material.

Ryoji CG Memo. Real-world_camera_matching [od. *The accuracy of a motion control rig is often measured by it's ability to repeat movements. so, an accuracy like .5mm over each repetition at a given time has little correlation to the absolute accuracy that we are interested in from the digital side. for example, if a rig is told to move 20 meters across the stage, it probably can't be assumed that it will will move 20 meters += .5mm even if it's supposed to be accurate to .5mm translationally. 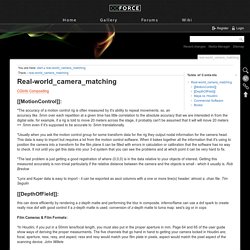 *Usually when you ask the motion control group for some transform data for the rig they output nodal information for the camera head. This data is easy to import but requires a lot from the motion control software. PyroFX smoke bug. Looks like a tricky problem! I will play around with it as well, but there are some smart guys in this thread already, so not sure if I will be able to solve that specific issue. Sometimes a little bit of shader displacement (along the gradient, tracking with the rest position) might be enough to help hide the problem too - that's more of a fix than a real solution though.

Apart from that it does look like banding of some sort, I've had that happen when the container gets resampled and the resolutions between containers are not the same. It might be good to analyze the velocity in that region. Also the confinement exagerates the eddies/rotational vortex movement. Export material facesets from maya to houdini with alembic. PRT_RopDriver how to ? Many many constraints. Looks like you've already figured out a way of doing this, but I finally got a chance to put together an example of what I meant here. It is indeed a little frustrating that you've got all these great tools for copying and transforming things in SOPs, but have little access to them in DOPs when it comes time to create constraints.

So I was referring to the idea of using these same tools to add attributes to certain points that will then each represent a constraint, with those attributes being the parameters to the constraint. In some cases these points can just be placeholders, i.e. not part of the sim geometry at all; you just create them at the same time as your copy-stamped geometry using similar geometry, parameters, etc. and reference them within the DOP sim.

So you use an ApplyRelationship node with an "npoints" expression in the Number of Relationships field, then for each constraint reference the current "constraint point" using the $REL variable (or stamp). Houdini Footprint Pipeline. Houdini » Toadstorm Nerdblog. I just wanted to post a little bit about the Creep POP in Houdini because I’ve had such a hell of a time getting it to do anything useful. I was trying to create the effect of raindrops sliding down glass. In Maya, this is a pretty simple thing- enable Needs Parent UV on the emitter, create Goal UV attributes on the particles, and set goalU=parentU and goalV=parentV on the creation expression.

MbPlumage Performance Tests - Houdini Digital Asset. FLIP Texture Advection. Rendertime advection. Cloud Rnd 2. Houdini Gridless Advection test. Gasmatchfield destroys existing field data? Shader noise on rest fields. Pyro displacement and restfield? - Side Effects Software Inc. Rest2 vector type from Pyro2 is not readable in volume vop? 'duanxiaozhi', on 25 Sept 2012 - 9:58 PM, said: The aanoise return a negative value so you can not see it.you can only see 0 -1 in the viewpoint,if you want to chagne that,you can add a volume vizulization sop and remap the filed. aanoise returns value from -0.5 to 0.5 I re-mapped density in visualization node to be something like -1~1 but still nothing.

If I put voxel pos of original density to "pos" input of aanoise, it works but of course it does not follow the fluid motion.If I put rest vector volume attribute to "pos" input of aanoise, it displays nothing if I re-map the density in visualization. Fluid simulation > what is "rest" field for? The rest field is basically a field storing the initial positions. For a fluid sim, we can use a rest field for noise lookups in the shader to add apparent detail to your sims at render time. The rest field is advected along with the fluid and therefore the noise can look like it's moving with the fluid when you render it. Further, in houdini the default is to have 'dual rest fields' so that your noise doesn't get too streaky.

You have two positions for looking up noise values that are reset every x number of frames, they offset in time from one another so that when one rest field is reset, the other is in full swing, then vice versa. The noise crossfades into the other so that when you add noise to your sim, you get a smoother, and not as streaky effect. Fluid mapping - Page 2 - Shaders - od. How can I increase the apparent detail in a volume at render time? Gridless advection. Fuel Air Explosion. Houdini 12 Pyro - Shape Settings Tests (Flames) Houdini 12 Pyro - Shape Settings Tests (Explosions)

Flip. Power of gas repeat solver. 'JuriBryan', on 28 Mar 2012 - 08:42 AM, said: Creating simple tornado motion using pointcloud. "Pyroclastic noise" demystified - Shaders. Gridless advection. Memory Leak in H13 with Flips maybe ? Possible Memory Leak I seem to be having a very strange problem. FX Thinking. I, Houdini. Attributes in expression? The POP Merge SOP is a way to reuse an existing POP network. Expression cookbook - Houdini online help. Use the ch("pathname") function to grab the value of another parameter. For example, to have a Tube SOP change its height based on the translation of an object named logo, set the tube’s Height parameter to the expression ch("/obj/logo/ty").