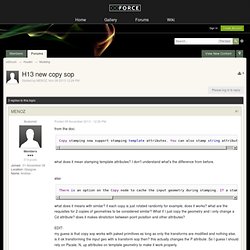 You can also stamp string attributes. what does it mean stamping template attributes? Procedural Terrains - Page 3 - General Houdini Questions - od. Transform the primitive - Modeling. Ah ok great. yea that makes sense the order of inputs can cause the output result to differ, its not like multiplication. 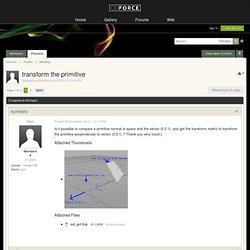 I have another problem that I have noticed with this method. I'n the position attr, it looks slightly off for some objects, with the house it was fine, but now i use a platonic and the faces don't seem to center properly. I had another method to calculate the center $CEX,Y,Z in a prim attrCreate. this seems more accurate. check it out. not sure why the output would be different though. also something else odd, when I calculate $CEX,Y,Z in a point attrCreate the result is different than if in a prim attrCreate? Any explanation for this? Rock Hard - Work in Progress. First of all, very nice work! 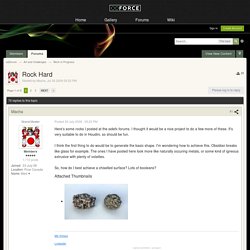 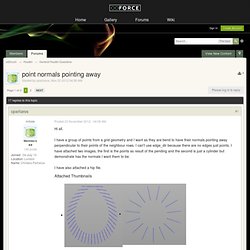 If the points are ordered, it's easy to do.All you need to do is in VOPs (pseudo-code):d = (importattib (ptnum+1) "P") - (importattib ptnum "P") N = normalize(cross(d, {1,0,0)))For the last point, since it doesn't follow the flow of points in one direction, you could copy and mirror it from the first one. What's the best way to copy generated shapes onto points? Use point attribute, so all points of first shape will have id=0 etc in that case all will be moved to point number 0 from source points you would need to replicate it manually, but it's sort of trivial task, just getting orient, scale, pscale, position and transform points based on them ( P*scale*pscale*(orient converted from quaternion to matrix) + position ) if you have N or v and up instead of orient you can construct matrix from them using lookat VOP, or if you have rot as well, that's just an rotation offset on top. 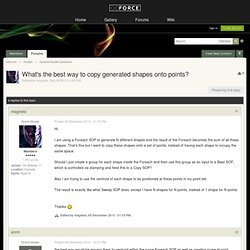 Point attributes. Vector and point question. Procedural terrain and more - Work in Progress. BulletSOP 2.0 beta_v4 for Win64 and Linux64 - Bullet. 'horizon1231', on 02 Feb 2013 - 04:47 AM, said: as sidefx told,they don't want to implement bullet in sops.they want to keep framework of DOPs.if everything stays in sops would be faster then current version,but losing the beauty of houdini.ppl in production really want speed and stability,thats why we all love Milan' work. 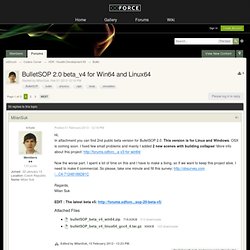 Maybe there exists a middle-ground... kinda like what the 'solver sop' does - although that is still a bit different. Or a version of bullet in dops that has a reduced overhead so it runs faster. 'MilanSuk', on 02 Feb 2013 - 8:39 PM, said: I tried to have deal with Orbolt, which would be the easiest way for users and me. Too bad indeed, it is a bit of a can of worms to try and support this from sidefx point of view. Here is another idea:Start a kickstarter, set a goal and see how far you get with the community chipping in to potentially make your source code available as open source. Houdini - z-way.org. How to make variable evaluate in real time? 'zarti', on 31 Jan 2013 - 01:21 AM, said: can you describe in short what you modified ? 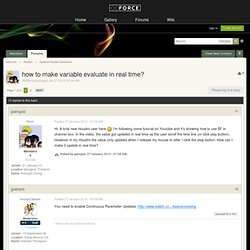 Hey Zarti, I generally post files, but in this case, since I was figuring this out at work and later shared with the team, I was a bit concerned that it would be looked upon badly... Nevertheless, here goes a quickie. I mainly looked at this page of the documentation: From there I learned about creating the PARMmenu.xml inside my $HOME/houdinixx.x/The contents of my XML are: <? You'll have to modify the scriptpath tag with the path to your script in your machine.