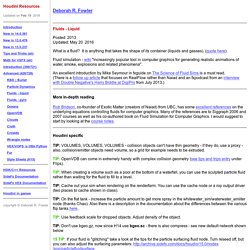 It is anything that takes the shape of its container (liquids and gasses). (quote here). Fluid simulation - wiki "increasingly popular tool in computer graphics for generating realistic animations of water, smoke, explosions and related phenomena". An excellent introduction by Mike Seymour in fxguide on The Science of Fluid Sims is a must read. More in-depth reading Rob Bridson, co-founder of Exotic Matter (creators of Naiad) from UBC, has some excellent references on the underlying equations controlling fluids for computer graphics. Houdini specific TIP: VOLUMES, VOLUMES, VOLUMES - collision objects can't have thin geometry - if they do, use a proxy - also, collision/emitter objects need volume, so a grid for example needs to be extruded.

TIP: OpenVDB can come in extremely handy with complex collision geometry (see tips and trips entry under Flips). TIP: Cache out your sim when rendering on the renderfarm. Packed primitives information. I put together a description of some possible examples, but it was too colloquial, incomplete, and way too last-minute to get into the docs in any acceptable form. 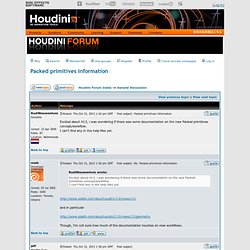 In case you're interested, here's what I wrote: A packed primitive provides a suite of mechanisms for encapsulating an entire detail that may or may not even exist in memory until the primitive is unpacked. To avoid having to load and display everything while using it, it provides options for displaying as just a bounding box, or just the points of the geometry.

It also enables very significant memory sharing, to the point of providing SOP-level instancing and much more, while being much simpler to set up than object-level instancing. This is recommended as the way to do instancing in the future. For example, suppose that you have 5 intricate oak tree models, stored as polygon soups in files, with which to make a forest of 10,000 trees. Tools. Every time you create an operator or press a button on the shelf you are executing a tool. 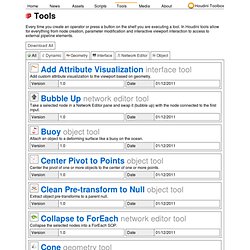 In Houdini tools allow for everything from node creation, parameter modification and interactive viewport interaction to access to external pipeline elements. Add custom attribute visualization to the viewport based on geometry. Take a selected node in a Network Editor pane and swap it (bubble up) with the node connected to the first input. Attach an object to a deforming surface like a buoy on the ocean. Center the pivot of one or more objects to the center of one or more points. Extract object pre-transforms to a parent null. Collapse the selected nodes into a ForEach SOP. MSc Project Peter Claes. Thesis Controlling Fluid Simulations with Custom Fields in Houdini Code / downloads Houdini scene files and tools User Guide / Instructions: Help file incorporated on the tools with separate demo scenes part of the downloads A compilation of the various manipulations I did using my volume attribute transfer tools and the solvers and microsolvers in Houdini's dynamic context. 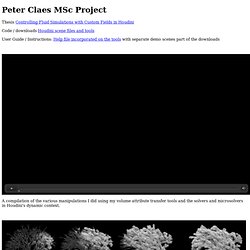 Setting a tree on fire by spreading the fuel field through the branches and applyint temperature. Setting fuel on fire that was defined by a helix curve. Using particle collisions to trigger fuel and heat emissions combined with a high initial velocity that is sampled from the normal of the collision surface. The density and tangent velocity fields for used to modify the velocity. Using the tangent vectors of a helix curve to modify the velocity field. Merging colors together through diffusion of a custom color vector field and making the red colors rise quicker by driving the temperature with the red color value. Valerio Di Napoli. Houdini at Christian Schnellhammer . TD Blog.

Archive for the ‘houdini’ Category houLDPK – 3DEqualizer Lens Distortion For Houdini With houLDPK it is possible to load lens models from the popular 3DEqualizer camera tracking software and use it in houdini. 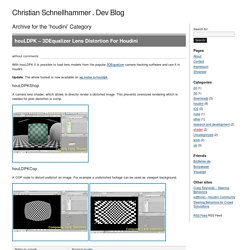 Update: The whole toolset is now available on wp.keller.io/houldpk houLDPKShop A camera lens shader, which allows to directly render a distorted image. HouLDPKCop.

Houdini_sops. Art of Destruction (or Art of Blowing Crap Up) Destruction pipelines today are key aspects of any major visual effects pipeline. 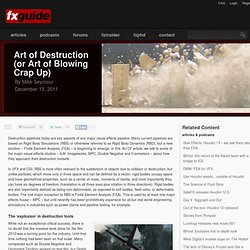 Many current pipelines are based on Rigid Body Simulations (RBS) or otherwise referred to as Rigid Body Dynamics (RBD), but a new solution – Finite Element Analysis (FEA) – is beginning to emerge. In this ‘Art Of’ article, we talk to some of the major visual effects studios – ILM, Imageworks, MPC, Double Negative and Framestore – about how they approach their destruction toolsets. In VFX and CGI, RBS is most often relevant to the subdivision of objects due to collision or destruction, but unlike particles, which move only in three space and can be defined by a vector, rigid bodies occupy space and have geometrical properties, such as a center of mass, moments of inertia, and most importantly they can have six degrees of freedom (translation in all three axes plus rotation in three directions). The ‘explosion’ in destruction tools A scene from '2012', visual effects by Digital Domain. Another scene from 2012. Beginners - Houdini Expressions Tutorial. 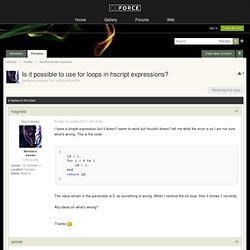 I use custom expressions and the custom per-parm expressions somewhat frequently. They are pre-compiled so run very fast, much faster than equivalent python functions. You can bind in hscript commands and expressions easily.It supports many of the basic data types found in c from ints, floats, strings to arrays. The first time I was introduced to them big time was in '94 when David Oliver wrote a sliding skin deformed by underlying muscle surfaces for a Dinosaur for a movie of a similar name with a single custom expression in PRISMS. Muscles in Houdini today are inspired by that work and drove things in that direction. To learn more about how to write custom expressions, see the help.