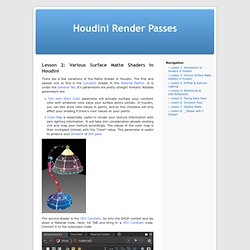 The first and easiest one to find is the Constant shader in the Material Palette. It is under the General Tab. It’s parameters are pretty straight forward. Notable parameters are: Tint with Point Color parameter will actually multiply your constant color with whatever color value your surface points contain. Tutorials [od. Tutorials Key The value in front of each entry lies between: 1 (beginner) and 9 (advanced). 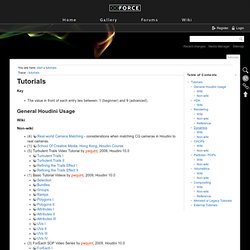 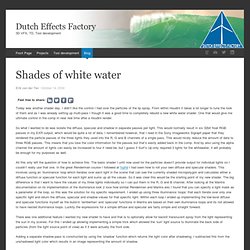 I didn’t like the control I had over the particles of the lip spray. From within Houdini it takes a lot longer to tune the look of them and as I was already setting up multi-pass I though it was a good time to completely rebuild a new white water shader. One that would give me ultimate control in the comp in near real time after a Houdini render. So what I wanted to do was isolate the diffuse, specular and shadow in separate passes per light. This would normally result in six 32bit float RGB passes in my EXR output, which would be quite a lot of data. How to run a python script in houdini? - Scripting. Houdini Grid Based Fluids And Dynamics. A while back I got an invite to do a two day seminar in Seoul. 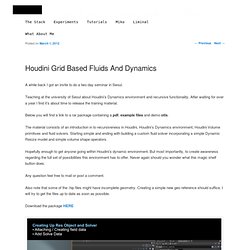 Teaching at the university of Seoul about Houdini’s Dynamics environment and recursive functionality. After waiting for over a year I find it’s about time to release the training material. Below you will find a link to a rar package containing a pdf, example files and demo otls. HOUDINI: Edge Group SOP. EdgeGroup SOP создан чтобы заполнить пробел, вызванный отсутствием в гудини понятия групп ребер. 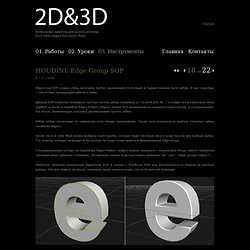 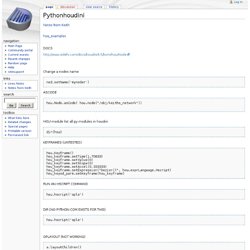 Neil Eichelberger - renderEICH.com. Patterns and textures will provide real appeal to the motion within this simulation. 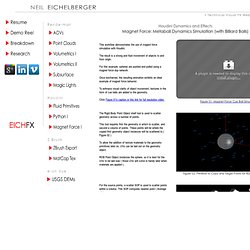 For this example, a custom attribute is added to each sphere with the AttribCreate operator (this is done within the instanced spheres/points geo object, after the dopimport operator). This operator applies a string parameter to each sphere. The string itself is created through concatenation of the project's working directory, an increment variable, and a filetype extension. An example of string concatenation: $HIP/img_directory. + rand($OBJID) + 1 + .png. Copy SOP & Instancing Attributes. Motion Blur: No Blur- No motion blur Velocity Blur- The shutter open transform is based off the Axis Alignment and Positioning stated above. 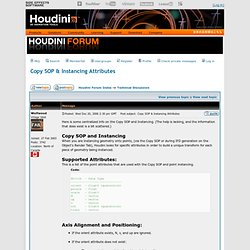 For the shutter close transform the shutter open transform is used plus the vector v/$FPS * shutter_speed. In the cases where that you have N and a v attribute, N is used to align but v is still used to blur. Note: v is independent of the transform constructed for the Axis Alignment and Positioning. Moderately interested. Houdini Tutorials. All the video tutorials were originally created using the XviD codec at varying resolutions, but I have since moved them to Vimeo. 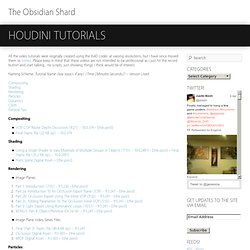 Please keep in mind that these videos are not intended to be professional as I just hit the record button and start talking… no scripts, just showing things I think would be of interest. Naming Scheme: Tutorial Name (key topics if any) (Time [Minutes:Seconds]) – Version Used. CompositingShadingRenderingParticlesDynamicsClothGeneral Tips Compositing Shading Rendering Image Planes:Image Plane Video Series Files:

Field3D. Field3D is an open source library for storing voxel data. It provides C++ classes that handle in-memory storage and a file format based on HDF5 that allows the C++ objects to be written to and read from disk. The library and file format is both flexible and extendable. The flexibility comes from supporting heterogeneous storage of data structures, bit depths, transformations/mappings and metadata in a single file. When functionality needs to be extended, the plugin and class factory architecture allows new data structures, mappings and file I/O routines to be added.

Field3D was developed with the needs and scale of visual effects production in mind. The code was initially developed at Sony Pictures Imageworks as a replacement for the three different in-house file formats previously used to store voxel data. Source code. Hom Class. Python and Houdini: implementation and workflow benefits. Tool Creation We are going to write a Python script in Houdini in order to create a proof of concept tool that will be some way towards creating a Render Pass Wizard. 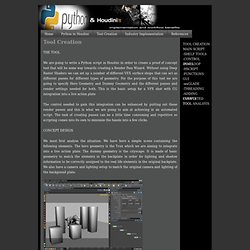 Without using Deep Raster Shaders we can set up a number of different VEX surface shops that can act as different passes for different types of geometry. For the purpose of this tool we are going to specify Hero Geometry and Dummy Geometry and the different passes and render settings needed for both. This is the basic setup for a VFX shot with CG integration into a live action plate. Python and Houdini: implementation and workflow benefits. Tool Creation - Main Script - Shelf Tools We can now put these tasks into one script which in this case we will run as a shelf tool. Go up to the shelf, create a new shelf and name it Render Utilities.RMB the new shelf to create a new tool. Now a dialog window will open up and we can give the tool a name and a label. Let’s name it rpw_v_0.1 and label it Render Pass Wizard. Houdini Particle Aura « Technical Repository.

This is a quick little demo and explanation of a setup I created for doing a particle aura. Particles are emitted based on the object’s normal direction from the camera. This is a screenshot of the VOP network that is doing the magic. Camera position is imported (into the particles’ object space). Houdini 12 Education, Animation & 3D/FX. Houdini Tools. Paul Winex. Houdini Basic. Pipeline: Houdini. Expression cookbook - Houdini online help. Use the ch("pathname") function to grab the value of another parameter. For example, to have a Tube SOP change its height based on the translation of an object named logo, set the tube’s Height parameter to the expression ch("/obj/logo/ty").

To create ch() references easily, press on the source parameter and choose Copy Parameter, then press on the target parameter and choose Paste Copied References. You can use the channel value within an arithmetic expression, for example ch("/obj/$OS/spare1") + ch("/obj/$OS/tx") + 2 takes the value of the channel $OS/spare1 and adds the X value of that point plus two. The chf() function is the same as ch() function, but you can specify the frame at which to sample the value of the named parameter. The chs() function returns the value as a string. Houdini/Terragen. Martin Sawtell's website. Point Clouds Point clouds are one of those things in Houdini that can be confusing and unclear the first time you try to use them; people often throw the term about in many different contexts and the documentation doesn't make it clear what's going on either.

So I figure I should write up some common workflows and how they might apply to the POPs context. Houdini tip: cache offset/frame offset. There is a few ways how to do it. To begin, create simple animation and create ROP Output Driver sop to cache out animation. 1st way 1) Just use Time Shift sop node and add your own expression for time shift: Deforming RBDs again! Translating pyro sim - how to negate container motion. VFX. Houdini Tools. Liquid Geometry This tool was inspired by the communications system in “Man of Steel”. Attribtransfer and the sop solver. Breakable string constraint. Many many constraints. Looks like you've already figured out a way of doing this, but I finally got a chance to put together an example of what I meant here. Getting Started with Procedural Animation & Expressions Houdini.