Anatomy of Houdini smoke solver - Houdini. Smoke render, quality. First things first: You didn't even have a shader applied to the smoke. 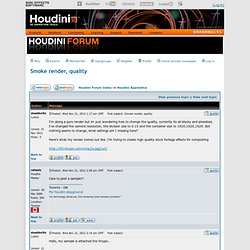 In that case mantra is simply reading density values and outputting them straight out, hence the images you got. You need a shader (pyro shader to begin with), you need proper light setup (attenuation, shadows, intensity, color, etc) and you can also make use of a good volume filter (I personally like gaussian). Lastly you must take some time to setup the mantra ROP, rendering from the preview might be fine for checking things out, but a little optimization will go a long way to getting the images you want. I didn't spend 2 minutes tweaking your file and it already looks different (arguably better) than your original post.

Nevertheless, it shows you can certainly get better results than that. And, please, upload your files to the forum, specially when they are this small. Cheers PS: As per Jeff's rants, pyroclastic cloud is an misnomer... Streak artifact in billowy smoke. What you are witnessing is with your lingering volume being advected is the various filters working away creating patterns in your low resolution density volume. 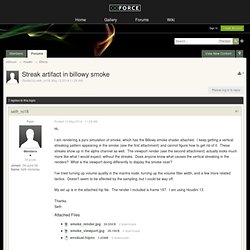 To compound the issue, you are constructing the initial density volume with an Iso Offset SOP at a very low resolution, lower than the base grid size of your smoke simulation. By simply bypassing that Iso Offset SOP feeding in to the Fluid Source SOP, you at least give yourself a fighting chance as you decrease the voxel size in your simulation, your initial density volume will at least keep pace. The way you have it now, not good. Let the Fluid Source SOP with it's channel reference in to the Smoke Object's voxel size created by the Shelf Tools drive things until you know what you are doing and decouple them for more advanced work.

Custom mask for turbulence in pyro. Get rid of mushroom effect in explosion and add details in the opening - Page 2 - Effects - od. Temperature Field and Divergence Field and what to do about it Combed straight velocities lead to mushroom puffs. 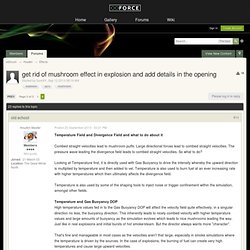 Large directional forces lead to combed straight velocities. The pressure wave leading the divergence field leads to combed straight velocities. So what to do? Looking at Temperature first, it is directly used with Gas Buoyancy to drive the intensity whereby the upward direction is multiplied by temperature and then added to vel. Temperature is also used by some of the shaping tools to inject noise or trigger confinement within the simulation, amongst other fields.

Temperature and Gas Buoyancy DOPHigh temperature values fed in to the Gas Buoyancy DOP will affect the velocity field quite effectively, in a singular direction no less, the buoyancy direction. That's fine and manageable in most cases as the velocities aren't that large, especially in smoke simulations where the temperature is driven by the sources. What is Divergence? For Explosions, there is feint hope. Force field repel. Here is a two minute set up showing the principal that I would use to make such a shot work. 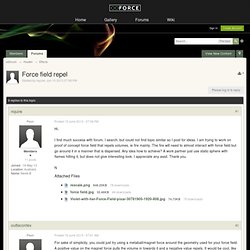 I am using an animated sphere with a noise pattern to break up the collision geo for the fire in Dops. I feed it into dops not as an RBD (way to slow with animated geo) but as a collision volume (very fast, at least here). This also allows me to easily define some curl noise velocity on the volume to break the motion up even further (you can also "paint/direct" the vel in what ever direction you want since you are using sops) Thats what I would be using for the simulation, its fast and gives a lot of control. for extra little tweaks I would go with magnet forces... and not with the vop force they seam to be very slow.

Also a lot of the effects that you posted here ( everyone besides the fire shot) don't look like full sims to me, but rather like shaders (Spheres with displacement maps and so on). FireForceField.hipnc 1.33MB 104 downloads. Simulating fine smoke. In regards to fine detail smoke: You will need millions of particles: And if you want to be more efficient and go with the advanced approach - you may need a mantra procedural like this one: Overal your large scale motion comes from your sim, your small scale detail comes from the particles. 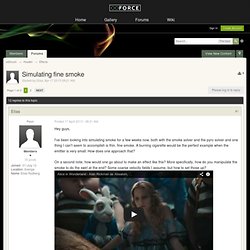 Here are some tips: *) It is better to emit from a tiny cylinder, rather than from a single point. Smoke trail on path. Hi guys, I've got the scene from this thread: so all credits for this setup go to Rob and SESI...I've just tried to develop it further and adapt it to work on a fast moving object at long distance and during my work I've always faced the same problem with cutting the density at the container's borders. 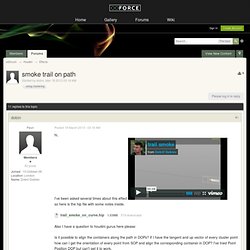 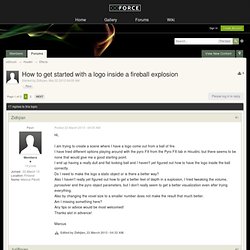 I read somewhere the micropolygon renderer is the most suitable for best result. Explosion. Here are some basic pyro tips on sources. 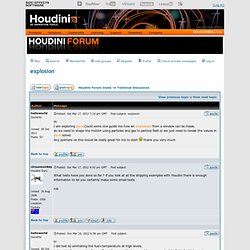 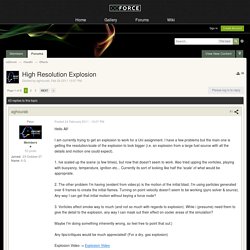 Pyro FX 2 Shader Videos. Convert PyroFX Smoke to Polygons. "Pyroclastic noise" demystified - Page 4 - Shaders - od. In the past I have faked advection by adding 3D noise to P, and this noised P was used as the basis for everything else requiring P as input. 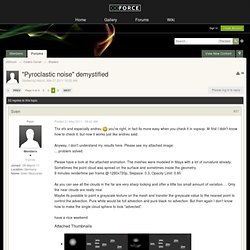 Multiple 3D noises with differing scales and amplitudes were added to "P". The point being to fake different scales of turbulence. In the project I developed the technique for I used the same tool for clouds, standing dust, explosions and smoke stacks... really wish I had that "power noise" back then The age affected parameters were ramped so that we could affect when different parameters would take effect. For a pyroclastic feel I was able to set how much the density noise follows the metaball's transforms, but obviously not as good as "power noise", or actual pyroclastic noise. Rendering Pyro in Houdini12 using PRMan17 - Rendering. Working with Pyro cluster caches. Normal passes on Volume renders? - Lounge/General chat. Rendering Smoke. Gas Up Res. Prior to Houdini 12, the Pyro solver used DOP relationships to associate sources, pumps, sinks, and collision geometry with a fluid container, using the Merge DOP and/or Apply relationship DOP to create the relationship.

The preferred method in Houdini 12 and later is to use SOP networks to create sources, pumps, sinks, and collision geometry and import them using the Source volume DOP. If you want to use the old relationship method to set up sources, sinks, etc., you can enable relationships using the parameters on this tab. By default, relationships are turned off, and the solver ignores relationship data. You can use both methods (import SOP geometry and attach it to the solver’s “sourcing” input, as well as set up DOP object relationships). When relationships are enabled, the solver will combine the sources, sinks, etc. from both methods. Render Smoke Issue. Mantra: VEX Volume Procedural. Pyro uplift force. Add Extra velocity in pyro and flip using cached particle sim. Adding rendering parameter - pixel samples - Rendering. SYmek, on Apr 16 2008, 05:56 PM, said: Well, I don't think you can control pixel sampling on per object basis, in other way then simply rendering it in separated layers with different settings in Mantra ROP.

As to glass artifacts, I think you can control ray tracing quality (rays varies) independently from a pixel sampling. This way you can save some CPU cycles, increasing rays amount but with stable pixel sampling. Does it have sense? Sy. Thank you for clarifying, to a degree it does make sense, I will try increasing the ray tracing quality. Passes for volumes - Rendering. Render volume with 3delight - Rendering.