Is Cardi B Proud of her Work Ethic? Cardi B: By The Numbers. Cardi B just returned on May 31 with her long-awaited single, “Press.” 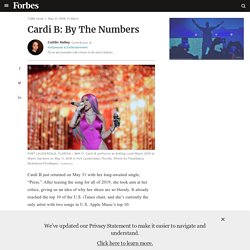 After teasing the song for all of 2019, she took aim at her critics, giving us an idea of why her shoes are so bloody. It already reached the top 10 of the U.S. iTunes chart, and she’s currently the only artist with two songs in U.S. Apple Music’s top 10. The Bronx rapper might not be so “regular degular” anymore with her list of accolades growing longer by the minute. Earlier this year, she earned the Grammy for Best Rap Album.

Cardi B Facts - 29 Things You Didn’t Know About Cardi B. She's "obsessed with presidents. 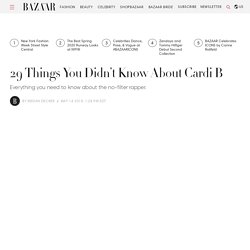 " In a recent interview with GQ, Cardi B admitted she enjoys studying the structure of the American government. "I love political science," the rapper told the magazine. "I love government. I'm obsessed with presidents. I'm obsessed to know how the system works. " Getting fired up about the legacy of the late president Franklin D. Cardi B Helped Her Bronx Community By Handing Out Hundreds of Coats Before New York's Winter Storms - Fierce.

The weather is getting considerably colder as we head towards the winter months. 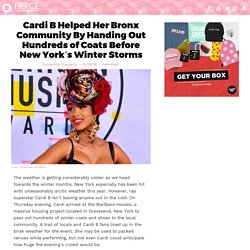 New York especially has been hit with unseasonably arctic weather this year. However, rap superstar Cardi B isn’t leaving anyone out in the cold. On Thursday evening, Cardi arrived at the Marlboro Houses, a massive housing project located in Gravesend, New York to pass out hundreds of winter coats and shoes to the local community. A trail of locals and Cardi B fans lined up in the brisk weather for the event. She may be used to packed venues while performing, but not even Cardi could anticipate how huge the evening’s crowd would be. The Bronx-native passed out coats at The Marlboro Houses, a housing project in Gravesend, New York. The Dominican-Trinidadian rapper’s act of charity came at a time when those out in the streets of New York and or unable to afford proper winter wear were hit with extremely cold temperatures this week. Cardi B was also given a symbolic key to the Marlboro House. EasyBib: Free Bibliography Generator - MLA, APA, Chicago citation styles.

Cardi B's Parents and Siblings: Interesting Facts ▷ Legit.ng. You must have heard a lot of Cardi B, the breakthrough hip-hop superstar of recent time. 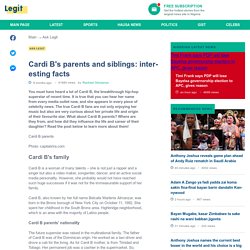 It is true that you can hear her name from every media outlet now, and she appears in every piece of celebrity news. Cardi B GIFs. Top Artists - Female - Year-End. Cardi B Opens Up About Her Career & Being a New Mom in 'W' Profile. Bronx rapper Cardi B talked about her past, her successful career and her journey to motherhood in an exclusive interview with W magazine published Tuesday (Oct. 9). 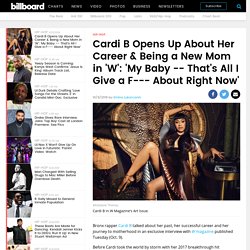 Before Cardi took the world by storm with her 2017 breakthrough hit "Bodak Yellow," she was a young stripper from New York City who utilized her resilient work ethic to survive and achieve her dreams. By creating hilariously magnetic videos on Instagram in her New York Latina accent, Cardi quickly accumulated thousands of followers who would later become the biggest supporters of her music career. Her breakthrough song "Bodak Yellow" propelled her to the top of the Billboard Hot 100 chart, making her the first female solo rapper to top the chart since Lauryn Hill in 1998.

The hit single later paved the way for her Invasion of Privacy album released earlier this year, along with becoming the first female rapper to score three No. 1 singles on the Hot 100. "When I got pregnant, I was fucking freaking out,” Cardi told W. NPR Choice page. Cardi B Asks Bernie Sanders if He's Scared of Upsetting Powerful People. Cardi B has been a fan of Vermont senator Bernie Sanders for a while now. 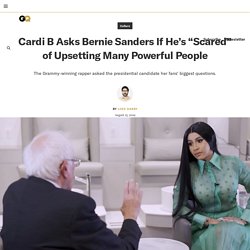 In the 2016 presidential primaries, she encouraged her fans to "Vote for Daddy Bernie, bitch. " And even before he got in the race for the 2020 presidential nomination, she told Variety, "Imma always be with Bernie. " She added, "Bernie don't say things to be cool. There's pictures of him being an activist from a very, very, very long time. " Now she's gone from fan to interviewer: In a new video out Thursday, the rapper sat down with Sanders at the TEN Nail Bar in Detroit, asking him questions submitted by her fans on social media, touching on racism, police brutality, health care, and their shared love of Franklin Delano Roosevelt.

"Don't you ever feel scared that these people who run drug companies, and these schools, you know it's all a business, are you scared that you'll get so many powerful people upset? " "Cardi, that's what I've been doing my whole life," Sanders replied. "No, it doesn't. Cardi B Is a New Rap Celebrity Loyal to Rap’s Old Rules on ‘Invasion of Privacy’ And yet, that is partly a hip-hop myth deployed by gatekeepers. 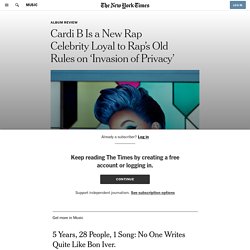 Cardi proves it’s a lie: The skills she has been deploying to hilarious effect in her other careers are exactly the ones that make her music so invigorating. Few artists of any kind are so visibly and infectiously enthused. As a result, the appetite for her is insatiable, and the career milestones are coming fast and furious: co-hosting “The Tonight Show” alongside Jimmy Fallon, appearing on the covers of various magazines, announcing her pregnancy during a performance on “Saturday Night Live.” She has also been the most reliable hip-hop guest star of the last 12 months, with appearances on G-Eazy’s “No Limit,” Migos’s “MotorSport,” Ozuna’s “La Modelo” and the remix of Bruno Mars’s “Finesse” — she has yet to release a dud. For someone who only started rapping a few years ago, that stylistic versatility is striking — it shows Cardi to be a quick study.