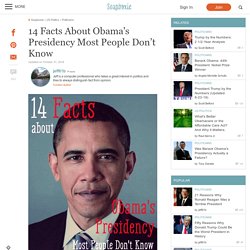 Depending on your political views, you may think the country did exceptionally well or was teetering on the verge of collapse. Listed below are fourteen objective facts, without interjected opinion, about the state of America under the leadership of President Obama. Every statement is followed up with a link to a reputable source where you can verify the fact for yourself. 1. That’s right: For ninety consecutive months, the US economy got progressively better.

Source: Obama Out-Performs Reagan on Jobs, Growth, and Investing; Forbes magazine. 2. 3. 4. From early 2009 onward, there was a steady upward trend in stock market growth as the economy continued to improve. Source: Dow Jones Industrial Average Last 10 Years: Macrotrends. 5. Source: What is the Deficit? Workday BrandVoice: Creating Positive Change Through Global Impact Initiatives. By Carrie Varoquiers, Vice President, Global Impact, Workday and President, Workday Foundation Innovation and people drive not only our business and product development at Workday, but also our continued work to help create positive change—through concern and care for the planet, the communities where we live and work, and the future of our growing and diverse workforce. 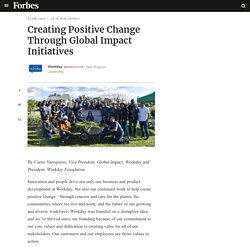 Workday was founded on a disruptive idea, and we’ve thrived since our founding because of our commitment to our core values and dedication to creating value for all of our stakeholders. Our customers and our employees see those values in action. In that spirit, I’m proud to announce the release of our 2019 Global Impact Report, which serves as a strong reminder of these commitments and our roots. Below are a few highlights. Sustainability in the Cloud We’ve continued to strengthen our commitment to sustainability. 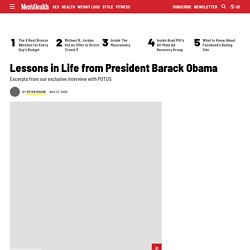 Men's Health readers are 12 million strong. You're an educated cross-section of America, and you're smart health consumers. "And a lot of your readers are, if they're like me, weekend warriors on the basketball court. They're looking at knee replacements and hip replacements so they can stay active. Those things do cost money," he says. Clearly, the president, with his silky jump shots and deceptive lefty drives, intends to keep running the court with young aides for a long time. "I think one of the changes that has happened—even since I was a kid—when I looked at my grandfather, at 55 he already looked old," he says. You have to grant Barack Obama two things: He has accomplished a meteoric rise to the verge of vast power, and he's managed an innovative political organization that energized millions of people and raised even more millions of dollars.

Obama After Dark: The Precious Hours Alone. “A lot of times, for some of our presidential leaders, the energy they need comes from contact with other people,” said the historian Doris Kearns Goodwin, who has had dinner with Mr. 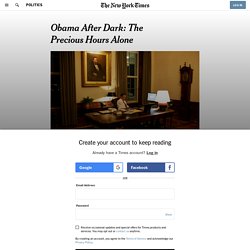 Obama several times in the past seven and a half years. “He seems to be somebody who is at home with himself.” When Mr. Obama first arrived at the White House, his after-dinner routine started around 7:15 p.m. in the game room, on the third floor of the residence. Barack Obama Facts: 10 Interesting Things You Might Not Know About the 44th President of the United States. Barack Obama and Michelle Obama at the president’s swearing-in ceremony | Chip Somodevilla/Getty Image How much do you know about former President Barack Obama? 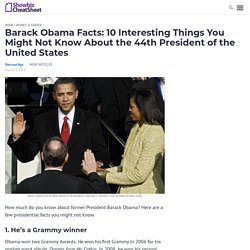 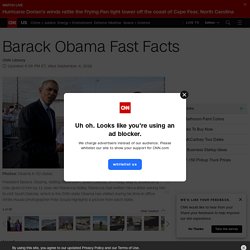 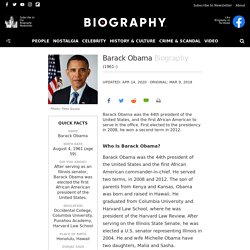 Barack Obama was the 44th president of the United States and the first African American commander-in-chief. He served two terms, in 2008 and 2012. The son of parents from Kenya and Kansas, Obama was born and raised in Hawaii. He graduated from Columbia University and Harvard Law School, where he was president of the Harvard Law Review. After serving on the Illinois State Senate, he was elected a U.S. senator representing Illinois in 2004. Coach K. Butler - Home.