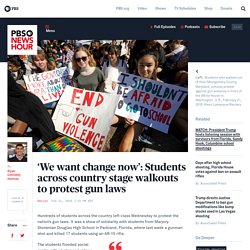 It was a show of solidarity with students from Marjory Stoneman Douglas High School in Parkland, Florida, where last week a gunman shot and killed 17 students using an AR-15 rifle. The students flooded social media with photos and videos from the demonstrations, along with calls to action for planned walkouts on March 14, the one-month anniversary of the shooting in Parkland, and April 20, the 19th anniversary of the deadly high school shooting in Columbine, Colorado.

More than 125,000 students have signed onto a change.org petition for an April 20 walkout. The message — it’s time for action — was the same at a listening session at the White House, hosted by President Donald Trump, which brought together survivors of the Parkland attack along with parents and community members from the Columbine and Sandy Hook school shootings. Tallahassee, Florida Broward County, Florida New Jersey Chicago Chicago. Orlando shooting: 49 killed, shooter pledged ISIS allegiance. * The gunman, Omar Mateen, 29, of Fort Pierce, Florida, was interviewed by the FBI in 2013 and 2014 but was not found to be a threat, the FBI said. * Mateen called 911 during the attack to pledge allegiance to ISIS and mentioned the Boston Marathon bombers, according to a U.S. official. * Orlando police shot and killed Mateen. * Mateen's ex-wife said she thinks he was mentally ill. 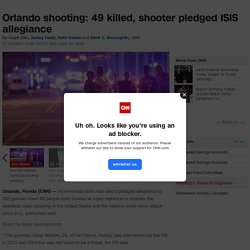 Mateen carried an assault rifle and a pistol into the packed Pulse club about 2 a.m. Sunday and started shooting, killing 49 people and wounding at least 53, officials said. Trump’s Travel Ban: How It Works and Who Is Affected. Even if they obtain visas, students can still be stopped and questioned at the border if Customs and Border Protection officers have doubts about whether the purpose of their travel is indeed study. 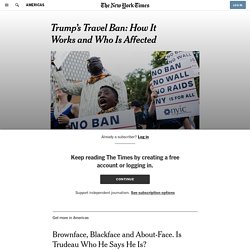 Still, students with visas who are re-entering the country to return to school should not encounter problems, said Kevin R. Johnson, dean of the School of Law at the University of California, Davis. There are indications that in Iran’s case, at least, many students who have accepted offers in the United States are looking elsewhere. What makes a mass shooting count as terrorism? When we talk about terrorism, we’re talking about something that is an inherently political form of violence. 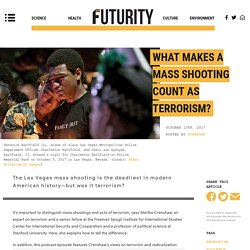 With this most recent shooting, we do not know the shooter’s motive. Regardless of that, we typically think of an act of terrorism as being part of a systematic campaign. Each act in itself sends a message and communicates the threat of another attack. By any other name: Why the 'travel ban' really is a Muslim ban. (RNS) — Before the Supreme Court ruled last week that President Trump’s executive order banning travel to the U.S. by citizens from majority-Muslim nations was not discriminatorily aimed at Muslims, the argument had already been won in an unlikely place: the mainstream media. 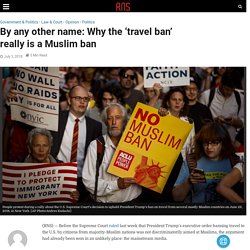 Since becoming president, Trump has gone out of his way to fulfill a central campaign promise: to bar Muslim immigrants and refugees from entering the country. To improve the chances of this policy passing legal muster, the Trump administration has insisted on framing the executive order as a “travel ban” rather than a “Muslim ban.” Trump and his supporters have had plenty of help in this endeavor from journalists who continue to describe Trump’s policy of barring various Muslim populations from the U.S. as a “travel ban.” A common assumption at work is that this language is an impartial way to describe Trump’s immigration policy on select Muslim-majority countries.

The Effects of 9/11 on Faith and Religious Beliefs. The world was shocked by the terrorist attacks of September 11, 2001, and one of the effects of 9/11 was on religious beliefs. 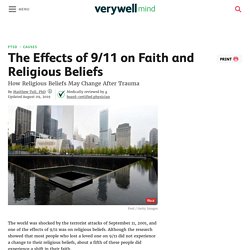 Although the research showed that most people who lost a loved one on 9/11 did not experience a change to their religious beliefs, about a fifth of these people did experience a shift in their faith. Have you experienced a traumatic event that has left your beliefs shaken? Are you possibly dealing with PTSD? Find out how traumas shape our religious beliefs — and how you can get help for your lasting pain. Coach K. Butler - Home. Freedom of Religion. Freedom of religion is protected by the First Amendment of the U.S. 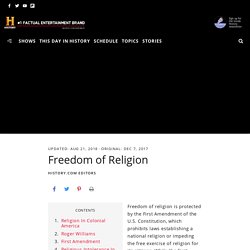 Constitution, which prohibits laws establishing a national religion or impeding the free exercise of religion for its citizens. Religious Freedom Week. Find Out More Who We Are Find the Latest News on our homepage Learn more, Religious Liberty at Home. 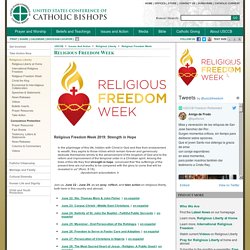 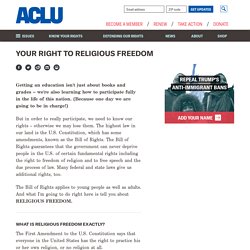 (Because one day we are going to be in charge!) But in order to really participate, we need to know our rights -- otherwise we may lose them. The highest law in our land is the U.S. Constitution, which has some amendments, known as the Bill of Rights. 12 Controversial Research Topics (with Resources) to Help You Get Started. Brit Lit Key Dates - Coach K. Butler.