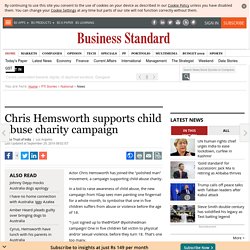 In a bid to raise awareness of child abuse, the new campaign from YGap sees men painting one fingernail for a whole month, to symbolise that one in five children suffers from abuse or violence before the age of 18. "I just signed up to the@YGAP @polishedman campaign! One in five children fall victim to physical and/or sexual violence, before they turn 18.

That's one too many. "For the month of October, I'll be painting one nail to represent this statistic and raise awareness and funds to end violence against children. Hemsworth, 33, recently joined his "Thor" co-star Tom Hiddleston in character as Thor and Loki, as they visited sick children at Lady Cilento Children's Hospital in Brisbane, Australia. Chris Hemsworth opens up about charity work during sneak peek of new film in Sydney. It was when Chris Hemsworth became a father himself he was inspired to throw his star power behind the Australian Childhood Foundation, a charity which aims to protect some of the most vulnerable children in the country. 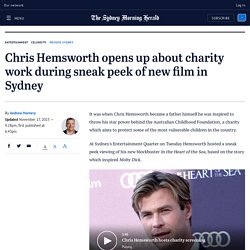 At Sydney's Entertainment Quarter on Tuesday Hemsworth hosted a sneak peek viewing of his new blockbuster In the Heart of the Sea, based on the story which inspired Moby Dick. Chris Hemsworth opens up about his charity work with the Australian Childhood Foundation during a sneak peek of his new film, In the Heart of the Sea, in Sydney. Hemsworth told PS that it was a "no brainer to sign up as an ambassador to the ACF". His involvement with the organisation made headlines last year when he met with Foreign Minister Julie Bishop in Canberra. Hemsworth was invited to Parliament House by Bishop to brief the then Prime Minister Tony Abbott about the charity's work after the pair met at the AFL grand final.

Chris Hemsworth: How He Trains to Transform Into Thor for the 'Avengers' Free Bibliography Generator - MLA, APA, Chicago citation styles. What Chris Hemsworth was like before all the fame. After getting back on Branagh's radar, Hemsworth knew he needed a killer audition tape, and he pulled it off thanks to his mom. 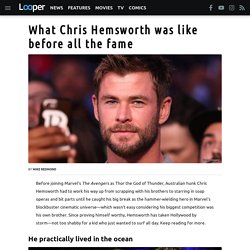 "I was on the 17th floor of a hotel in Vancouver with my mom reading the lines to me," he told The Hollywood Reporter, "and something great must have happened. It got me back in the room. " "We did two or three interview sessions before we tested him," Branagh said. "We pretty much knew as we were shooting the test that he was the guy. It seemed, across these meetings, he had grown into it. Having his mom help him land his biggest role must've been a special moment for Hemsworth. "We grew up with very little money and that kind of frustrated me as a kid listening to my parents talk about bills every week and sort of seeing the sort of weight that put on them," he told W Magazine.

Chris Hemsworth. Chris Hemsworth: How He Trains to Transform Into Thor for the 'Avengers' Chris Hemsworth's Evolution: 'Star Trek' to 'Bad Times at the El Royale' When Emily Meade approached HBO about adding an intimacy coordinator to last year’s second season of “The Deuce,” she didn’t even have a word for who that person would be. 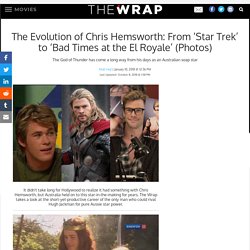 What she did know ­­– and was finally willing to admit — was that she felt uncomfortable performing the high volume of sex scenes as an aspiring porn star on the show. “There’s a stunt coordinator for any stunt, there’s an animal handler for any animal, there’s a chaperone for any child,” Meade told TheWrap. “There’s all these protections put in place for anything vulnerable, and yet sex is one of the most vulnerable things, and there isn’t anyone there.” It was only days after that meeting that HBO contracted intimacy coordinator Alicia Rodis to oversee the sex scenes on “The Deuce,” which returned Sunday for its third and final season. “We’ve had a really good experience with it,” HBO programming president Casey Bloys told TheWrap at the recent Television Critics Association press tour. 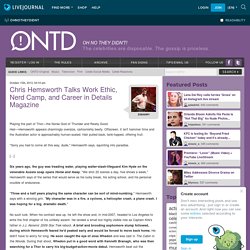 Offscreen, it isn't hammer time and the Australian actor is approachably human-scaled. Hair pulled back, tank-topped, offering fruit. "Sorry you had to come all this way, dude," Hemsworth says, squinting into paradise. Six years ago, the guy was treading water, playing waiter-slash-lifeguard Kim Hyde on the venerable Aussie soap opera Home and Away. "We shot 20 scenes a day, five shows a week," Hemsworth says of the series that would serve as his lucky break, his acting school, and his personal crucible of endurance. "Three and a half years playing the same character can be sort of mind-numbing," Hemsworth says with a wincing grin.

No such luck. So the guy is likable, hardworking, talented, and lucky: That's his friends' and coworkers' theory, and they're sticking to it. "I paid my way in," the actor deadpans. Thor by KAdi Henderson on Prezi Next. Coach K. Butler - Home.