Life as an NBA Draft Bust. Best College Basketball Players Who Never Made It in the NBA. 0 of 14 Success in college doesn't always translate over into success as a pro. 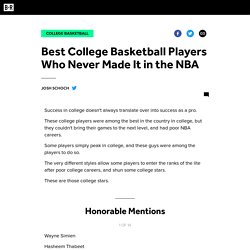 These college players were among the best in the country in college, but they couldn't bring their games to the next level, and had poor NBA careers. Some players simply peak in college, and these guys were among the players to do so. The very different styles allow some players to enter the ranks of the lite after poor college careers, and shun some college stars. These are those college stars. 1 of 14 Wayne Simien Hasheem Thabeet Scottie Reynolds Mateen Cleaves Think you know another honorable mention? 2 of 14 Remember Greg Oden? He might also be the worst pick the Portland Trail Blazers have ever made. Oden has struggled with injuries during his entire career. All in all, he's averaging 16.4 games per season, playing just 20 percent of games. Jay Williams recalls the fateful day when he 'threw it all away'

After just one season with the Chicago Bulls, a team starved for a new messiah since Michael Jordan's retirement, Jay Williams destroyed his career when he suffered a horrific motorcycle accident. 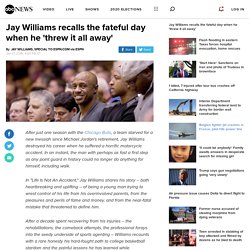 In an instant, the man with perhaps as fast a first step as any point guard in history could no longer do anything for himself, including walk. In "Life Is Not An Accident," Jay Williams shares his story -- both heartbreaking and uplifting -- of being a young man trying to wrest control of his life from his overinvolved parents, from the pleasures and perils of fame and money, and from the near-fatal mistake that threatened to define him. After a decade spent recovering from his injuries -- the rehabilitations, the comeback attempts, the professional forays into the seedy underside of sports agenting -- Williams recounts with a rare honesty his hard-fought path to college basketball stardom and the painful lessons he has learned while reconstructing his fractured adulthood. ESPNAPI IMG NO ALTEXT Valu. Related imag. In the name of 'amateurism,' college athletes make money for everyone except themselves. As millions of people tune in to watch the Final Four, much of their focus will be on the numbers on the scoreboard. 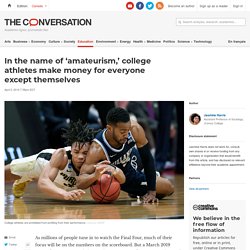 But a March 2019 report from U.S. Sen. Chris Murphy, a Democrat from Connecticut, calls attention to numbers of a different sort. The report – titled “Madness, Inc.” – details just how much money other people make off Division I athletes versus how much money is being spent on their college education. Here are three points from the report that struck me as a researcher who studies the structure and culture of academic life for student-athletes at Division I schools. College athletes matter to billion-dollar companies When one of the Nike shoes being worn by Duke’s Zion Williamson blew out just seconds into the highly anticipated game between Duke and the University of North Carolina this spring, it showed the increasingly important role that top men’s basketball players play in generating revenue for corporations – not just the schools for which they play.

NCAA tournament payouts: How much money do colleges make off March Madness? The NCAA Division I men’s basketball tournament makes a lot of money. 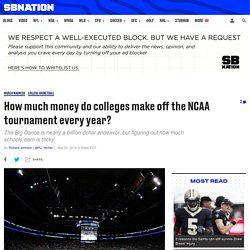 In fact, it’s the thing the NCAA — a non-profit organization — points to as pretty much the only thing it does that actually makes money. Recently, the organization released a financial audit that shows just how much it earns from the tournaments it puts on across all sports, with the lion’s share coming from the gargantuan rights deal with CBS/Turner sports for the men’s basketball tournament. The pot the NCAA pays out from is called the “basketball fund.” There are plenty of places all that money goes, but one of them is called the basketball fund, which is a pot of about 30 percent of the tournament TV money.

The NCAA keeps some of that money for things like administrative salaries and funding other tournaments. This system began in 1991, and the fund’s money gets distributed to conferences in what are called “units.” Coach K. Butler - Home. Paying Students to Play Would Ruin College Sports. The University of Wyoming, too, announced that it would offer stipends to its student-athletes in 2015, resulting in a new expected annual cost of $700,000 to the athletic department. 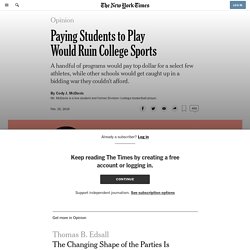 A year later, calls were being made for a reduction in the athletic department because of budgetary concerns. (Those cuts almost certainly would have been made, had it not been for a $4 million subsidy from the state government.) Gene Smith, the athletic director at Ohio State University, has said that if the N.C.A.A. pay ceiling were lifted and he were pushed to pay basketball and football student-athletes more than their full-ride scholarship packages, he would not expect to maintain the same number of sports. The chancellor at the University of Wisconsin, Rebecca Blank, has also said that her school would consider cutting sports programs altogether.

Forcing the N.C.A.A. to pay student-athletes would undermine opportunities for the vast majority of them. Cody J. Cody J.