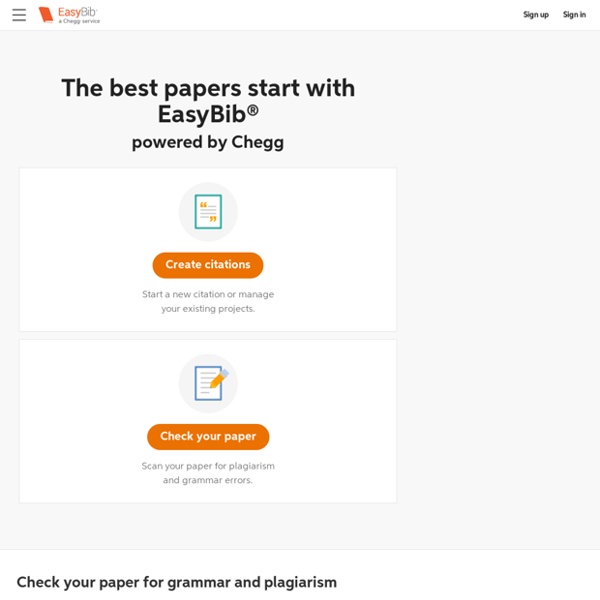 APA Formatting and Style Guide Summary: APA (American Psychological Association) style is most commonly used to cite sources within the social sciences. This resource, revised according to the 6th edition, second printing of the APA manual, offers examples for the general format of APA research papers, in-text citations, endnotes/footnotes, and the reference page. Printing Press The interactive Printing Press is designed to assist students in creating newspapers, brochures, and flyers. Teachers and students can choose from several templates to publish class newspapers, informational brochures, and flyers announcing class events. Text added to the templates can be modified using a simple WYSIWYG editor, which allows students to choose text features, such as font size and color.

Padlet - Apps on Google Play What is Padlet?Padlet is like paper for your screen. Start with an empty page and then put whatever you like on it. Upload a video, record an interview, snap a selfie, write your own text posts or upload some documents, and watch your padlet come to life. Once others add to it, the page will update in real time. 12 Emerging Educational Uses of Technology That Are Most Exciting Right Now Well, it's that time of year again … the start of a new school year. With it often comes the irresistible urge to make another list, or even better … many lists! Lists help us to plan, and they can also help us reflect and assess.

Jessie (2011 TV series) Plot The series follows Jessie Prescott (Debby Ryan), a young woman from a small town with big dreams who, rebelling against her strict father, decides to leave the military base in Texas where she grew up and moves to New York City. She accepts a job as a nanny and moves into a multimillion-dollar penthouse on the Upper West Side with the wealthy Ross family which includes jet-setting parents Morgan and Christina Ross and their four rambunctious children: Emma, Luke, Ravi, and Zuri, along with the family pet, Mr. Kipling, a seven-foot Asian water monitor lizard, that was later revealed to be a female. With a whole new world of experiences open to her, Jessie embarks on new adventures in the big city as she grows to rely on the love and support of the children in her care.

www.creativebloq.com/design-tools/data-visualization-712402 It's often said that data is the new world currency, and the web is the exchange bureau through which it's traded. As consumers, we're positively swimming in data; it's everywhere from labels on food packaging design to World Health Organisation reports. As a result, for the designer it's becoming increasingly difficult to present data in a way that stands out from the mass of competing data streams. Creative Mind Mapping for Novelists Brainstorming ideas seems to be one of the hardest stages in the writing process for many novelists. As I discussed in a previous post, this storm of ideas that flash and thunder in our brains often appears unruly and difficult to harness. I introduced the practice of mind mapping, which is used across many disciplines—such as in classrooms for essay writing and in business meetings to problem-solve.

Literature » Grade 9-10 The CCR anchor standards and high school grade-specific standards work in tandem to define college and career readiness expectations—the former providing broad standards, the latter providing additional specificity. Key Ideas and Details: CCSS.ELA-Literacy.RL.9-10.1Cite strong and thorough textual evidence to support analysis of what the text says explicitly as well as inferences drawn from the text. CCSS.ELA-Literacy.RL.9-10.2Determine a theme or central idea of a text and analyze in detail its development over the course of the text, including how it emerges and is shaped and refined by specific details; provide an objective summary of the text. - Maker Space In Education Series: 10 Sites To Start Making In The Classroom 0 Comments August 13, 2014 By: Michael Gorman Aug 10 Written by: 8/10/2014 6:38 PM ShareThis Welcome back and I sure hope you enjoyed the last article of 20 Reasons for Maker Space in Education.

Cameron Boyce Foundation launches 'Wielding Peace' campaign to end gun violence The late actor Cameron Boyce was a social justice advocate who raised his voice for many causes. Now, his family and friends are working to keep his spirit alive even after his tragic death in July from a seizure caused by his epilepsy. The Cameron Boyce Foundation recently launched a powerful campaign to end gun violence called "Wielding Peace." Supporters are encouraged to take a photograph wielding any item, as if it were a gun, in support of the organization's mission to end gun violence. The actor, who was working on this project before his passing, is featured in some of the first photos kicking off the social media campaign. The project was photographed by Boyce's cousin, Taryn Dudley, who also served as its creative director.

The 5 Cs in Education: What If… Sketchnoting in the Process After my sketchnoting workshop at Miami Device, I was asked to record my process of CREATING the sketchnotes. I used Airserver to mirror my iPad display to my laptopUsed Screenflow to record myself sketching the main points of the presentationUsed Screenflow to speed up the recorded footage from 30+ minutes to 2.5 minutesExported, then imported into iMovie to add credtits and music This was the first time doing a screencast this way for me…there are a few kinks that I still need to work out (how to NOT record the screenflow toolbar). [The sketchnotes created in the video below were NOT created live, but AFTER, I had created the slide deck already}

OmPad: Free, beautiful, minimal and inspirational writing web app Welcome to OmPad! Free minimal writing app that helps you focus and concentrate on writing great content. Format your text with headings, bold, italic, links, images, lists, code and quotes. Customization: Change the theme, size, font and width by hovering over the OmPad logo (bottom left)Formatting: Select the text and a floating toolbar will show up.Images: Type in a URL, select it and click the image buttonHTML: Click the bottom right word-count You can start editing this text you are reading right now, go ahead, click here and start typing! "This is the best writing app ever, and it's free!"

Literature » Grade 11-12 The CCR anchor standards and high school grade-specific standards work in tandem to define college and career readiness expectations—the former providing broad standards, the latter providing additional specificity. Key Ideas and Details: CCSS.ELA-Literacy.RL.11-12.1Cite strong and thorough textual evidence to support analysis of what the text says explicitly as well as inferences drawn from the text, including determining where the text leaves matters uncertain. 50 Free Animation Tools And Resources For Digital Learners 50 Animation Tools & Resources For Digital Learners by Lisa Chesser, opencolleges.edu.au A purple monster with wild curls spiraling out of control explains the economics of oil production in the Sudan to students in Los Angeles, Sydney, Berlin, Jerusalem, and Riyadh. That is education and animation working together to teach students everywhere, everything they ever wanted to know. Educators need only utilize the tools available, most of them for free.

EasyBib is a app that I found very useful myself. Easybib will help you whenever you find that you need to cite sources in a specific style. Its free and helps keep your sources organized. Although others would say that its sometimes slow at loading a citation and that it at some points its inaccurate. But Easybib will come in handy when we get back to doing big projects like National History Day or any other school project. by yc015499 Jun 3