Fall Recipe: Hot Apple Cider Funnel Cakes. You know it’s been a good day when one of the kids walks into the house from school and says “It smells like those doughnuts from the pumpkin patch and apple orchard in here. 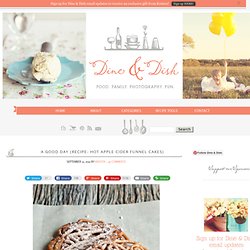 Why does it smell like those apple doughnuts? Where are the doughnuts?” No, I didn’t make doughnuts today, but I did make Hot Apple Cider Funnel Cakes… yes I did… with a cinnamon and powdered sugar topping. Mmmmmmm. Good day turns questionable when the kid keeps yammering… “Where are the doughnuts, mom? Then you have to break it to the poor little one that 1 – you didn’t make doughnuts and 2 – you made funnel cakes but they are all gone. Luckily, they are really easy to make.

The Best Banana Cake Recipe Ever! (With Cream Cheese Frosting) I tasted this banana cake for the first time when I was in Sydney. 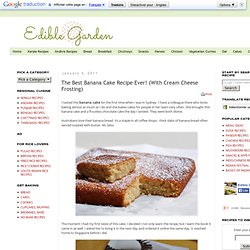 I have a colleague there who loves baking almost as much as I do and she bakes cakes for people in her team very often. She brought this banana cake and a flourless chocolate cake the day I landed. They were both divine. Australians love their banana bread. Its a staple in all coffee shops - thick slabs of banana bread often served toasted with butter.

Orange Gingerbread with Cream Cheese Frosting. Some things: - I sometimes think about working in a furniture store just to observe couples come in and fight over couch seat depth and textiles: a sociological study, you know? 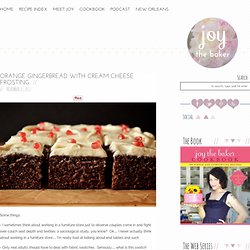 Ok… I never actually think about working in a furniture store… I’m really bad at talking about end tables and such. - Only real adults should have to deal with fabric swatches. Apple Dapple Cake. Perfection pound cake. (The reason I’m talking about pound cake and not this week’s chosen recipe is because I’m off gallivanting around Italy and have been since before this month’s recipes were chosen.) 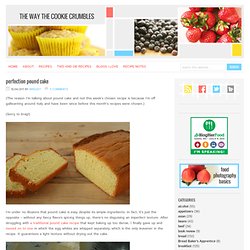 (Sorry to brag!) I’m under no illusions that pound cake is easy despite its simple ingredients. In fact, it’s just the opposite – without any fancy flavors spicing things up, there’s no disguising an imperfect texture. After struggling with a traditional pound cake recipe that kept baking up too dense, I finally gave up and moved on to one in which the egg whites are whipped separately, which is the only leavener in the recipe. It guarantees a light texture without drying out the cake. The majority of blog entries on Dorie’s recipe, which uses baking powder as the leavener, mention that it’s dry. Pull Apart Lemon Coffee Cake. The title says "cake" but I really feel that "bread" better describes what this is. 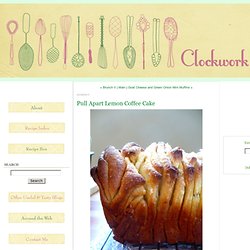 Sweet yeasty dough cut and slathered with butter and lemon infused sugar is baked and then spread with lemon cream cheese icing. Once its iced you can just peel the slices off, no need to cut (who has time to find a knife anyways??) When I think coffee cake I think dense, moist, and sweet.. this is more soft, lemony, and sweet-ish. Bread is a better description. However, it really doesn't matter what you call it, its not going to be around for long after you make it.

Ridiculously Easy. I mean it. 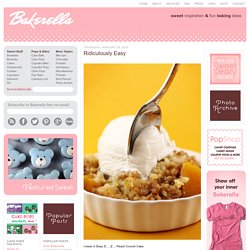 Easy. E…..Z…. Peach Crunch Cake. You need some sliced peaches in syrup. Just dump them in a 13 X 9 dish. Note: this can also be called a dump cake. Cut the peaches into smaller pieces and you can distribute them more evenly. Light Pineapple Angel Lush Dessert. Inevitably with the new year comes the desire for many of us to lead healthier lives. 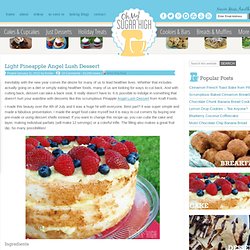 Whether that includes actually going on a diet or simply eating healthier foods, many of us are looking for ways to cut back. And with cutting back, dessert can take a back seat. Unbelievable Carrot Cake. Update 4/2011: Well, I’ve successfully been making this carrot cake for the last three years and except for this sheet cake variation, which is delicious in it’s own right, I haven’t met a carrot cake I love more than this one. 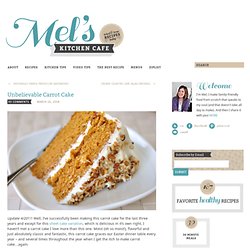 Moist (oh so moist!) , flavorful and just absolutely classic and fantastic, this carrot cake graces our Easter dinner table every year – and several times throughout the year when I get the itch to make carrot cake…again. It is stunning and elegant, in it’s double layer form, and the frosting – well, I could wax poetic about the dreamy stuff. Whipped and creamy with just the slightest enhanced flavor from the dollop of sour cream, this frosting is the best straight-up cream cheese frosting in my repertoire. Tangerine Bundt Cake « Cake. I love bundt cakes. 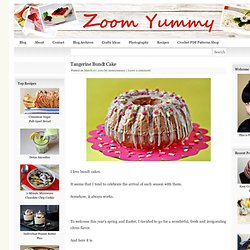 It seems that I tend to celebrate the arrival of each season with them. Somehow, it always works. To welcome this year’s spring and Easter, I decided to go for a wonderful, fresh and invigorating citrus flavor. Apple-Pie Cake. Alfriston Cottage: Cremós de llimona. Els esmorzars d'aquesta setmana a Alfriston Cottage tenen la combinació perfecta d'acidesa i dolçor. 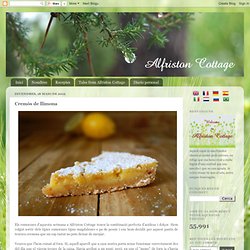 Pineapple Upside Down Biscuits + A Cooking Weekend in June! UPDATE: I’m an airheaded dork! Contest time has NOT ended. Feel free to continue entering until midnight tonight. I need coffee. Lots to cover today. Typical Monday! But I’ll try to make it worth your while. Some time ago, I had a visitor at the ranch. In all seriousness, Pam is a serious inspiration to me in so many ways. Pineapple Upside Down Cake in a Cast Iron Skillet. This recipe for pineapple upside down cake can be made in a regular cake pan, or like I did today, in a cast iron skillet.

This is the same recipe I have used for years, but this is the first time I’ve actually baked it in a cast iron skillet. It was a total success and the caramel crusty topping that develops from the brown sugar and butter was considerably better than the crust that develops in a standard baking pan. See that crust? Apple Coffee Cake with Crumble Topping and Brown Sugar Glaze Recipe : Emeril Lagasse.