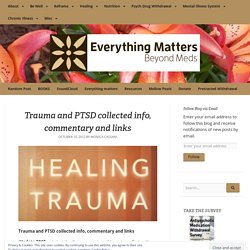 It’s not necessarily truly being practiced on the frontline of social services nor is the ubiquity of trauma involvement with all the major psych diagnosis being profoundly understood, but the change in the literature and what gets reported in the media is quite promising.) A lot of people like infographics as it makes visual facts that might not otherwise sink in. The most important fact on this infographic and one I’ve underscored again and again on this blog is that the vast majority of folks in the mental health system (this infographic says 90%) have been subject to trauma. That was certainly my experience when I worked in the mental health system.

Without appropriate care and integration trauma changes both our bodies and minds for many years and sometimes for our entire lives. World Peace Treaty - keshe.foundation. In the name of the Glory of God 06 September 2012 From the beginning of time man’s desire has been to have plenty to eat and a safe place to shelter, to create a tranquil environment where he can live with peace of mind and in this process develop his culture and add to his knowledge of his environment, of the universe and of creation. 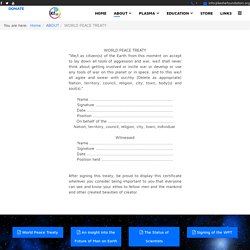 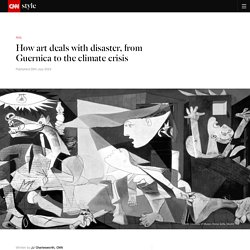 He has commissioned a series of features on identity. JJ Charlesworth is an art critic and senior editor for ArtReview. All opinions expressed in this article belong to the author. When faced with catastrophe -- war, famine or natural disaster -- most peoples' first priority is simply to survive. What’s the ‘culture’ in neuroanthropology? Some cultural anthropologists are afraid of the brain sciences; they fear that neuroscientists want to dissolve culture into the study of the brain, discounting the necessity of studying culture, social interaction, systems of meaning, symbolism, everyday life, and all the things that cultural anthropologists have argued are important for shaping human life. 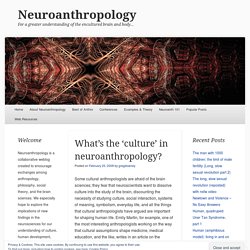 Emily Martin, for example, one of the most interesting anthropologists working on the way that cultural assumptions shape medicine, medical education, and the like, writes in an article on the ‘mind-body’ problem of the dangers of ‘neuro-reductionist’ thought. Neuroanthropology. Neuroanthropology 101: Body, Brain & Culture. 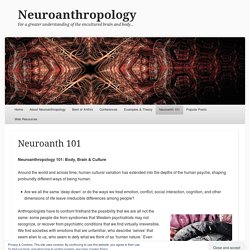 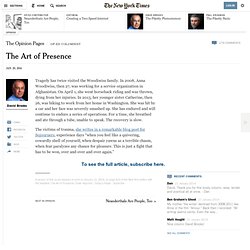 In 2008, Anna Woodiwiss, then 27, was working for a service organization in Afghanistan. On April 1, she went horseback riding and was thrown, dying from her injuries. In 2013, her younger sister Catherine, then 26, was biking to work from her home in Washington. She was hit by a car and her face was severely smashed up. She has endured and will continue to endure a series of operations. I was an Isis sex slave. I tell my story because it is the best weapon I have. The slave market opened at night. 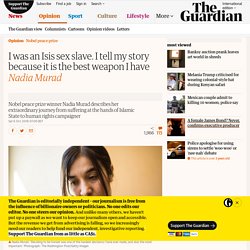 We could hear the commotion downstairs where militants were registering and organising, and when the first man entered the room, all the girls started screaming. The book that fights sexism with science. When young men and women come up against sexist stereotypes masquerading as science, Angela Saini wants them to be armed with the facts.

“I call my book ammunition,” she says of her 288-page prize-winning work Inferior: The True Power of Women and the Science that Shows It. “There are people out there who insist that somehow the inequalities we see in society are not just because of historic discrimination, but also because of biology – the idea that there are factors within us that will cause men or women to be better at some things than others.” She wrote Inferior to demonstrate that “actually, science doesn’t support that point of view. I think it’s important we understand these scientific facts. We need that ammunition to counter the weird mistruths that are circulating within and outside science about sex difference”.

To female scientists fed up with being treated as though their brains are the odd exceptions among their sex, Inferior is more than just a book. In first, Japanese researchers observe chimp mother, sister caring for disabled infant. A Japanese study of a chimpanzee mother caring for her disabled infant in the wild has shed light on how humans developed their social behavior. 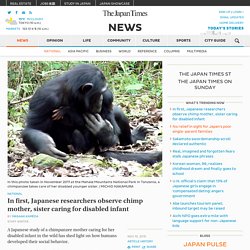 The first-of-its-kind study by a team of Kyoto University researchers was published Monday in the online edition of Primates, an international journal of primatology. Born in January 2011 in a chimpanzee group in Tanzania’s Mahale Mountains National Park, the female infant was “severely disabled,” exhibiting “symptoms resembling Down syndrome,” according to a summary of the team’s findings. Becoming Disabled.

Not long ago, a good friend of mine said something revealing to me: “I don’t think of you as disabled,” she confessed. 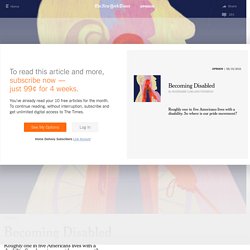 I knew exactly what she meant; I didn’t think of myself as disabled until a few decades ago, either, even though my two arms have been pretty significantly asymmetrical and different from most everybody else’s my whole life. My friend’s comment was meant as a compliment, but followed a familiar logic — one that African-Americans have noted when their well-meaning white friends have tried to erase the complications of racial identity by saying, “I don’t think of you as black,” or when a man compliments a woman by saying that he thinks of her as “just one of the guys.” This impulse to rescue people with disabilities from a discredited identity, while usually well meaning, is decidedly at odds with the various pride movements we’ve come to know in recent decades.