A Year of Deep Adaptation « Professor Jem Bendell. One year ago this month, our Institute at the University of Cumbria released my paper on Deep Adaptation to our climate tragedy. 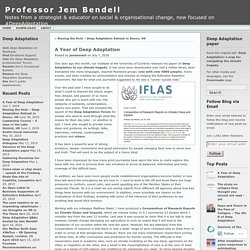 It has since been downloaded over half a million times, been translated into many languages, inspired Facebook groups (one with over 4000 people), many events, and been credited by commentators and activists as helping the Extinction Rebellion movement. Not bad for what one journalist suggested to me was a “career suicide note.” Improve Your Life: 10 Things You Should Do Every Day. Before we commence with the festivities, I wanted to thank everyone for helping my first book become a Wall Street Journal bestseller. 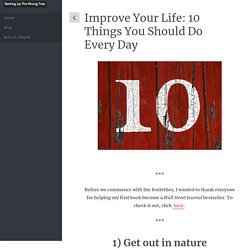 To check it out, click here. 1) Get out in nature You probably seriously underestimate how important this is. (Actually, there’s research that says you do.) Being in nature reduces stress, makes you more creative, improves your memory and may even make you a better person. 2) Exercise We all know how important this is, but few people do it consistently. 3) Spend time with friends and family Harvard happiness expert Daniel Gilbert identified this as one of the biggest sources of happiness in our lives.

Eight Things You Need to Know About Sex, Gender, Brains, and Behavior: A Guide for Academics, Journalists, Parents, Gender Diversity Advocates, Social Justice Warriors, Tweeters, Facebookers, and Everyone Else. 10 Ways Humans Impact the Environment. We as humans have become dependent on luxuries such as cars, houses, and even our cell phones. 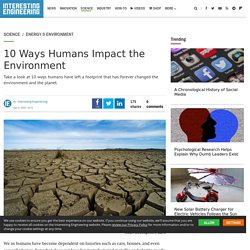 But what does our love for manufactured metallic and plastic goods do to the environment? Three tips for managing your mental health in 2019. Build A Kit. Make sure your emergency kit is stocked with the items on the checklist below. 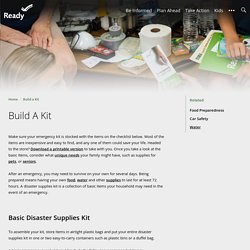 Most of the items are inexpensive and easy to find, and any one of them could save your life. Headed to the store? Download a printable version to take with you. Once you take a look at the basic items, consider what unique needs your family might have, such as supplies for pets, or seniors. After an emergency, you may need to survive on your own for several days. Basic Disaster Supplies Kit To assemble your kit, store items in airtight plastic bags and put your entire disaster supplies kit in one or two easy-to-carry containers such as plastic bins or a duffel bag.

A basic emergency supply kit could include the following recommended items: Download the Recommended Supplies List (PDF) Additional Emergency Supplies Consider adding the following items to your emergency supply kit based on your individual needs: Maintaining Your Kit After assembling your kit remember to maintain it so it’s ready when needed: Internet and Computers. Radical Urbanist.

Top Brookings Infographics of 2014. If the old adage, "A picture is worth a thousand words," is true, then I hope you'll enjoy the ten thousand words below, all culled from the cornucopia of Brookings infographics published in 2014, and presented in no particular order. 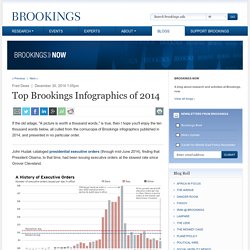 In one of the sections, Homi Kharas and Julie Biau measure sub-Saharan African nations' progress toward meeting the Millennium Development Goals compared to globally. Since 2000, poverty has grown twice as fast in America's suburbs as in America's cities. Beautycheck - social perception. Do attractive people have any advantages? 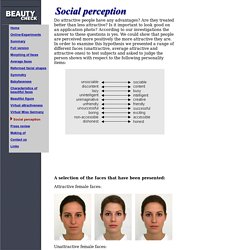 Are they treated better than less attractive? Is it important to look good on an application photo? According to our investigations the answer to these questions is yes. We could show that people are perceived more positively the more attractive they are. In order to examine this hypothesis we presented a range of different faces (unattractive, average attractive and attractive ones) to test subjects and asked to judge the person shown with respect to the following personality items:

Values. Explanations > Values About values | Historical values | Research on values | So what? 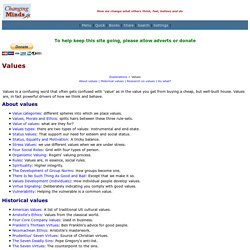 Values is a confusing word that often gets confused with 'value' as in the value you get from buying a cheap, but well-built house. Values are, in fact powerful drivers of how we think and behave. About values. The Hero's Quest. |Arthurian Legend| |Beowulf| |Classical Mythology| |Creation Stories| |Fairy Tales and Folktales| |Homer, The Iliad and The Odyssey| |Mythology Main Page| The all-purpose guide to epic moviesThis chart shows different archetypal roles at work in Harry Potter, Star Wars, and other movies: the hero, the threshold guardian, the trickster, etc. 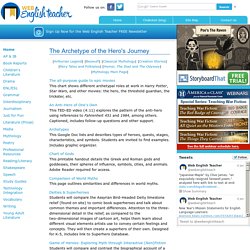 An Anti-Hero of One's OwnThis TED-ED video (4:11) explores the pattern of the anti-hero using references to Fahrenheit 451 and 1984, among others. Captioned, includes follow-up questions and other support. ArchetypesThis Google Doc lists and describes types of heroes, quests, stages, characteristics, and symbols. Ancient Place Names - Behind the Name. ALEMANNIA(Region)Ancient RomanLatin name for the lands where the Alemanni lived. 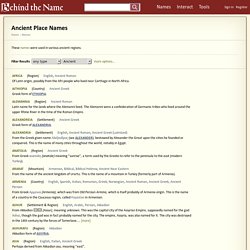 The Alemanni were a confederation of Germanic tribes who lived around the upper Rhine River in the time of the Roman Empire. ARMENIA(Country)English, Spanish, Italian, Romanian, Greek, Norwegian, Ancient Roman, Ancient Greek, Ancient PersianFrom Greek Αρμενια (Armenia), which was from Old Persian Armina, which is itself probably of Armenia origin. World's Largest Tree Of Life Visualizes 50,000 Species Across Time. Biologists love a good family tree. 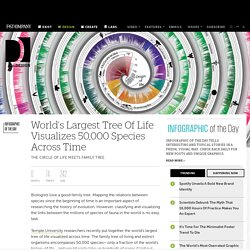 Mapping the relations between species since the beginning of time is an important aspect of researching the history of evolution. However, classifying and visualizing the links between the millions of species of fauna in the world is no easy task. Temple University researchers recently put together the world's largest tree of life visualized across time. 100 Diagrams That Changed the World. Since the dawn of recorded history, we’ve been using visual depictions to map the Earth, order the heavens, make sense of time, dissect the human body, organize the natural world, perform music, and even concretize abstract concepts like consciousness and love. 100 Diagrams That Changed the World (public library) by investigative journalist and documentarian Scott Christianson chronicles the history of our evolving understanding of the world through humanity’s most groundbreaking sketches, illustrations, and drawings, ranging from cave paintings to The Rosetta Stone to Moses Harris’s color wheel to Tim Berners-Lee’s flowchart for a “mesh” information management system, the original blueprint for the world wide web.

It appears that no great diagram is solely authored by its creator. Most of those described here were the culmination of centuries of accumulated knowledge. Most arose from collaboration (and oftentimes in competition) with others. Christianson offers a definition: Top 100 Speeches of the 20th Century by Rank. Stimulating Lectures. Harvard Top 100 - Bookadvice - Reading List.