Alternative Worldviews: Understanding Potential Trajectories of Great-Power Ideological Competition. The United States is engaged in a new era of great-power competition, which is taking place, in part, in the realms of information, ideas, and ideology. 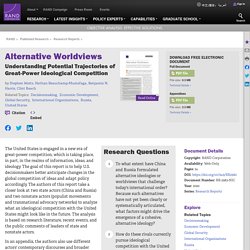 The goal of this report is to help U.S. decisionmakers better anticipate changes in the global competition of ideas and adapt policy accordingly. WTO chief quits suddenly, adding to global turmoil. FRANKFURT — The head of the organization charged with bringing a semblance of order to international trade relations resigned unexpectedly Thursday, adding another element of uncertainty to commerce in the midst of the coronavirus pandemic and escalating trade conflicts. 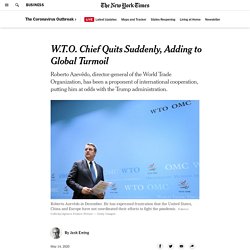 Roberto Azevêdo, a career Brazilian diplomat, resigned as the director-general of the World Trade Organization effective Aug. 31, the Geneva-based organization said. His second four-year term was not scheduled to end until September 2021. Interview with new JRC Director-General Stephen Quest. This month the Joint Research Centre welcomes Stephen Quest as its new Director-General. 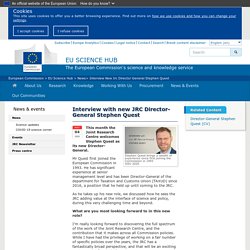 Mr Quest first joined the European Commission in 1993. He has significant experience at senior management level and has been Director-General of the department for Taxation and Customs Union (TAXUD) since 2016, a position that he held up until coming to the JRC. The Pandemic Bodes Ill for Both American and Chinese Power. California Declares Independence From Trump's Coronavirus Plans. “I don’t think I’ve ever seen anything like this”: what it’s like to be working on a Covid-19 vaccine. Paul Young is heading up one of the teams working on a coronavirus vaccine. 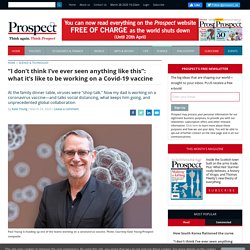 Photo: Courtesy Kate Young/Prospect composite Our family talked science around the dinner table. With a father and stepmother working in virology and diagnostics, “shop talk” was virus talk. My sister Luce and I would roll our eyes, and drift off into our own discussions. We’re lucky to have been relatively robust and healthy kids; we had the necessary vaccines, whined about being stuck with needles, and then promptly forgot about them. PATENT WARS in DIGITAL ERA：Nikkei. Tomorrowsinnovationhotspots. 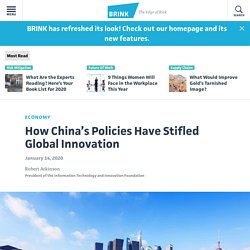 After the 2008 Great Recession, the Chinese government poured hundreds of billions of yuan into its solar energy firms to help them gain global market share. Photo: Shutterstock For many years, the prevailing view was that the rapid growth of China’s economy after it joined the World Trade Organization in 2001 had a positive effect on developed economies. Any deleterious impacts were thought to be largely temporary and borne by only a modest number of workers in particular regions.

But as more and better research has since been performed, it has become clear that this view was overly optimistic, and the harms were worse than many had forecasted, not just on jobs but on the pace of technological innovation. Damaging Mercantilism The problem did not arise simply from China joining the WTO. Unfair Advantage How Have Chinese Policies Been Harmful to Foreign Innovation? 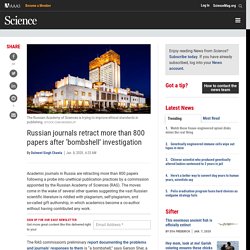 The moves come in the wake of several other queries suggesting the vast Russian scientific literature is riddled with plagiarism, self-plagiarism, and so-called gift authorship, in which academics become a co-author without having contributed any work. Russia’s roughly 6000 academic journals, the vast majority published in Russian, are popular among the country’s academics. A 2019 study found that Russian authors publish far more in domestic journals than, for instance, their counterparts in Poland, Germany, or Indonesia.

These 10 countries top the ranks in chemistry research. Where the best chemistry takes place. 12 December 2019 ERIC CABANIS/AFP via Getty Image. 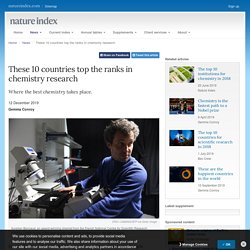 More than a third of Europe's fastest-growing tech firms are in UK – study. Britain is creating more technology companies worth at least $1bn (£786m) than any other company in Europe, according to government research. 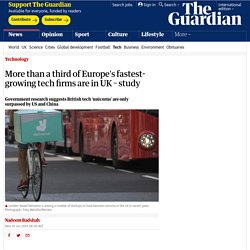 It found that UK-based entrepreneurs have built 72 such businesses in the past 20 years, including 13 in the past year, with only the US and China surpassing that number. Germany has 29 and India has 26. More than a third of Europe’s fastest-growing tech companies are based in Britain, according to the study for the government-led Digital Economy Council, whose members include techUK, Google, Facebook, BT and Apple. It said that, over the same period, the US and China had created 703 and 206 tech firm respectively. The food delivery service Deliveroo and Revolut, an online money transfer app, are among the startup firms to have become “unicorns” in recent years – a term coined for a private company valued at more than £1bn.