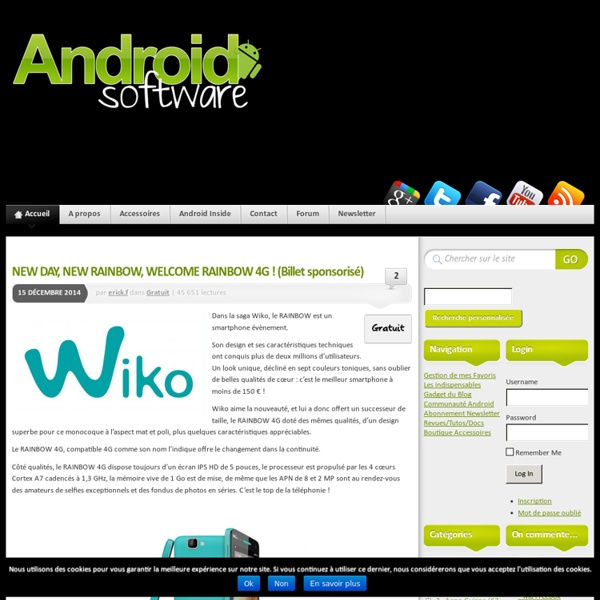 Clustering Engine Carrot2 Search Results Clustering Engine Carrot2 organizes your search results into topics. With an instant overview of what's available, you will quickly find what you're looking for. Secret Box-Hide SMS & Contact This is the free version: hidden SMS are restricted to 100 and it doesn't include Stealth Mode. Do you have some private content you don't want to share with anyone? Vault-Hide will help you out with that. First time you launch the app it asks you to set a pin code (number) to manage the app.

Barcode & Inventory - Android Market ** Newly Updated to support super high density screens like the Galaxy S4 ***** Added Dropbox for backup and export!!! ***** You can now export all the data from the trial version to the paid version!! *** Beginning Android Game Programming Introduction Game development on the Android platform is challenging and rewarding and comes with it's own set of pitfalls and hard learned lessons. In this series of articles I hope to show you some of those pitfalls and maybe teach a lesson or two along the way.

Distimo: Video games were the most downloaded apps on iPad and Android in September iPad and Android device owners now download video games more than any other type of app, according to new research by app analytics company Distimo. Throughout September, 48 percent of app downloads on the iPad were identified as games, outstripping entertainment (8.9 percent), lifestyle (4.1 percent), education (6.1 percent) and utilities (4.4 percent). Even outside of these categories, Distimo calculates that all other app types only attributed to 29 percent of downloads in the App Store. The popularity and demand for video games is slightly more subdued on the iPhone, however. These apps made up 33 percent of all downloads in the App Store, with photography, entertainment, lifestyle and social networking apps all coming in below 10 percent.

Deep Web Search Engines Where to start a deep web search is easy. You hit Google.com and when you brick wall it, you go to scholar.google.com which is the academic database of Google. After you brick wall there, your true deep web search begins. You need to know something about your topic in order to choose the next tool. The 75 Best Android Apps Maybe you just got your very first Android device, or maybe you've been using the best Android phones since they first came on the market. Or maybe, by choice or circumstance, you've factory-reset your phone and are looking at a completely blank slate. Either way, finding the best apps to get your Android device ready to take on the world can be a daunting task. Consider: If you looked at an app from Google Play every second, without stopping, it would take more than 23 days to see them all. Hence this list—a gathering of apps, some new and some old, that represent the very best that Android has to offer.

Android Sales Tracker @ SoftMiMo.com Answer: It's very easy to get your database restored after master reset. Here are the steps: 1) Before master reset your phone, you need to do database backup from Main Menu -> Options -> Back Up Database. You can also turn on the Local or Online Auto DB Back Up features from Main Menu -> Options -> Auto Database Backup. Real Android apps leveraging db4o persistence engine (Part 2) We Recommend These Resources This the second delivery in a series of articles targeted at showing developers how db4o (an open source database that leverages today's object-oriented languages, systems, and mindset) is being used in several Android projects to avoid all the pitfalls and hassles of object-relational mapping while benefiting from an concise and straight forward way to evolve a domain model which, in the end, translates into faster, easier upgrades for users. There are many benefits to using an object database like db4o, including easier code maintenance, and the ability to create applications based on more complex data models. Unlike in rigid, predefined SQL tables, you can store dynamic, free-form data, which can be changed or amended any time.

Awesome List Of Google Now Voice Commands - trendblog.net Most Android users are probably familiar with Google’s smart personal assistant Google Now. At least since the Android 4.4 KitKatnew commands update which integrated it profoundly into the user interface. One cool feature that came with KitKat are the many new voice commands together with the ability to trigger them by simply saying “Okay Google”. Google also works constantly on new commands to make Google Now an even more helpful tool. 100 Useful Tips and Tools to Research the Deep Web By Alisa Miller Experts say that typical search engines like Yahoo! and Google only pick up about 1% of the information available on the Internet.

Flasher et Rooter son Galaxy Ace (Page 1) / Samsung Galaxy Ace / Androix - Communauté francophone Android "By luck, I stumbled upon your site, and of course I wanted to try it out. I went on to deposit $500 on OneTwoTrade, then opened 5 positions and won 4. Took out the $500 and still have the profit of $288 to trade with. This is a great system you got there Sir, I definitely owe you one." Shelly Green - New York "I began with $200 on OneTwoTrade and I went down to $100 the first day.

Inventory Tracker @ SoftMiMo.com Answer: From out testing with 20 most popular Android devices, the barcode scanner feature works pretty well. The camera will focus every 5 seconds to take a picture and get the barcode without problem. Based on our experience, here are our suggestions and tips for using barcode scanner: 1) Scan barcode in a bright place (with enough light). Otherwise the software cannot figure out the code from bad quality imanges taken by the camera. 2) Try different barcode to avoid barcode issue. 3) Try different barcode scanner apps to see if your device has hardware or software issue for camera. Some old models of Android devices have bad quality hardware and software for camera. From Google Play Store, you can download Barcode Scanner from ZXing Team (or other providers) to verify if that's the case.

Google Apps (Gapps) - Download Latest Gapps for Android Google Gapps (or Google Apps as they are meant) are the proprietary applications by Google included in many Android devices. These are the core Google apps that are found in almost all phones and tablets. Most of the Gapps Google applications can now be found and updated via the Google Play Store. These apps are always running in Android under the process of com.google.process.gapps! Some of the Android Gapps included are: the Google Play Store itself, Google Talk, Google Sync (for adding and synchronizing Google accounts), Google Backup Transport, Car Home, Gmail, Google Maps, YouTube, Google Search, Google Voice Search, Google Music, and Google Docs.